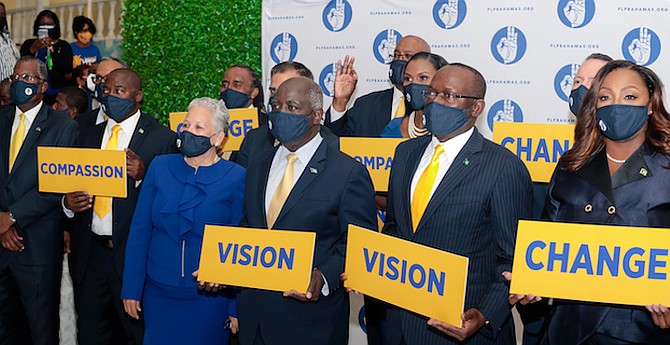 THE Progressive Liberal Party ratified 13 candidates for the next general election last night – including Senator Dr Michael Darville in the Tall Pines constituency, but not long-time representative Leslie Miller.

Though Dr Darville’s ratification was expected, it will prompt questions about Mr Miller’s political future given the public campaign he waged for the nomination.

Mr Miller, who did not answer calls seeking comment yesterday, has repeatedly said he would run as an independent candidate if the PLP denies him a nomination.

“No one can stop me from running,” he said last month. “Who is going to stop me? I am with my people and they are with me and that’s all I can tell you.

“If I was to run independent, I will win.”

PLP officials, nonetheless, have been expressing increasing confidence that an independent run from the outspoken politician will be prevented, with some noting Mr Miller enjoys a strong relationship with Dr Darville.

The event came as both major political parties face criticism about their adherence to COVID-19 rules.

Some PLP supporters in Golden Isles campaigned for him to be denied a nomination and even signed a petition calling for his rejection.

Yesterday, Mr Miller told reporters he believes he has won over some of his critics.

“There (was) some challenges in the branch and the constituency,” he acknowledged. “It’s expected and we handled it well.”

He added: “It’s an honour, it’s a privilege to serve, particularly with the oldest political party in the history of this country.”

“We certainly want to finish the vision. It’s all about empowering the people. People are hurting, people are challenged, people are really going through some difficult and some challenging times. Obviously the first order of the day is to restore the economy and restore hope in the lives of people because so many people have lost hope.”

The PLP has now ratified 31 candidates for the election.

“Bahamian people continue to call out in suffering in the midst of the Minnis administration’s mistakes and mismanagement of the hardest times in recent Bahamian history,” the party said in a statement.

“No longer should Bahamians – young and old – be forced to suffer in silence with no urgency from a government that defends the status quo.

“These candidates are ready to be the representatives of the country and the party holds fast that it will become the next government of The Bahamas.”

Is this Brave Davis’ last race for the PM’s chair? Do the Bahamian people have enough confidence in the PLP to re-elect them? Will the new faces make a difference? What about Vaughan Miller who seems to have a habit of jumping ships? And ‘PotCake’ Leslie Miller who was left standing on the outside. Will he run as an independent? Is there a swing in political candidates from attorneys to journalists and to other professions? What will be the PLP’s platform? ‘We’ve gotten rid of some rotten wood and nailed down some loose planks?’ Who you voting for?

The worst of the worst in this decrepid bunch of self-interested political hacks are:

Sadly though, Minnis is so bad for our country that he even makes many of these dolts shine in comparison to himself.

Serious question: what is the issue with Glover and Petty?

Serious answer: They may be newer faces to the electorate, but they each carry a lot of the worst kind of PLP baggage.

So if you were PM, what top 3 things would be on your agenda?

Had you asked me this question 30 years ago I might have said: (1) Comprehensive government/civil service/tax reforms from top to bottom, emphasising the importance of decent paying private sector jobs, quality education and healthcare for all Bahamians, and including election campaign funding reform aimed at stamping out corruption by our elected officials; (2) elimination of all overly generous and unnecessary concessions to foreign owned real estate developers, cruise ship companies, etc., with stringent limitations on New Providence land development projects and fair incentives encouraging more family island projects, but only for the more populated family islands with significant private sector job creation an absolute must; and (3) adoption of international diplomacy reforms emphasizing the importance of our relationships with the US (especially as regards assistance with our illegal immigrant problems), Canada, UK and, to a much lesser extent, the CARICOM nations, non-communist east asian countries and EU.

But your question has no real practical significance today unless you believe the present stranglehold that Communist China has on our country can somehow be undone.

If they better than Minnis then you have serious jokes!

Congratulations to the future losers!

But the FNM lot are even worse and scarier! Now that's truly scary.

Thank God my vote will not be wasted because there will be an independent candidate running in my constituency who I can comfortably vote for, and I don't mean myself.

listen, there is nothing wrong with them getting a piece of the pie and in the meantime, they can help one or two people whom really need help. The only things that ever get done in this country are poorly,paved roads and cracked side walks. otherwise, food keeps increasing, gas continues to be high, electrical bills remain high, water bills remain high, road traffic is still selling plates, and driver's licenses, police are still abusive, crooked and corrupt, immigration officers are still selling citizenship, politicians are still perceived to be in it for themselves, no campaign finance laws, still government red tape everywhere, the island is still an eyesore, the electricity still drops and appliances destroyed, internet is pathetic , even though our rates are higher than the US, land is still too expensive, building supplies are still too expensive , gun permits too expensive, we are still losing millions at Bahamas air, Zns, and all government agencies etc. the place is a dump and politicians will do one thing and become National Heros, politician's families get all their pension when they die...etc

What clown came up with this photo?! It is just screaming to be photoshopped. Replace their worthless slogan words with whatever fits the bill. Change Compassion, Vision, etc... with something like Time For Us To Tief, Tax Hikes Ahead, We Want Your Money...

A SIGNIFICANT part of the effectiveness of any campaigning political party, wanting to be the next Government SHOULD ALSO list their selections of key persons to be their politically appointed Heads and Members of the Boards of government agencies. Frankly, given the extremely poor repeatedly yearly performance of some, at great detriment to voters and future generations ....even known to by external agencies, there would not be any candidates of any political party being voted in in the first place !!!!!

Knowing the candidates also to be selected as politically appointed positions like Chairman and members of the Boards would clear up the process on whom is elected as government !!!!!

You don't know what you are talking about. Political parties should not have to list the potential board members and corporation chairmen.

Bahamians just simply talk and write stupidness.. Bahamians need to learn systems of governance. A real system of local government would do this.

@Bonefish, Bahamian cronies boot lickers like yourself should take their heads out of poIiticans rears and fully know that it is after the politicians are elected that the political appointed have been made afterwards...but politicians should not be condemned for giving perview for qualified persons to be part of effecting their promises.

You will note in above that I stated in bold "SHOULD ALSO" especially for cronies and defendants of cronies to take the bait.!!!!!.

The reason is that with the best intentions of prior utterances by campaigning and later elected politicians, the Appointed cronies, cohorts, is not in sync with politician first utterances to the electorate. Obviously Bonefish you are just one of the political shoes licking lackeys gravy train suckers willing coming out. Aspiring politicians are not denied to be open of their intentions of likely qualified persons or cronies to be in key roles.

A bunch of frauds, that's no secret.

Yes indeed. Unfortunately the other side, the currently governing side, have proven themselves to be much worse than our worst nightmare.

So where is the 40% of the candidates being women that Davis was pushing?

So Darville is sent from Freeport to Nassau. Really?

Both major parties are deeply flawed in this country. They are extremely conservative and backward when it comes to modern governance. In fact they are merely reflections of this country, hypocritical, backward and self -righteous.

Neither party has a vision for a modern Bahamas. Both are right of center in their ideology. In fact ,they don't have any political philosophy. Only cults of personalities, petty hatreds, race, class and gender differences. That is why by in large, so many persons are so disillusioned by politics here in the Bahamas.

Politics in the Bahamas has always been what Jamaican prime minister, the late Michael Manley said of politics there. It is merely political factions attempting to control and distribute the scarce resources of the state to their supporters.

The Bahamas should not be criticized by you using the views of late Michael Manley of Jamaica said of politics in the Bahamas. You obviously seem to be jonsering for some pseudo consultancy or advisor's position with the above party as seems many others.

If Bahamians were to compare Jamaica politician's and in your views on the Bahamas who you keeps mentioning, then you would just twice a bucketfull back at you on Jamaica.

Simply utter nonsense to be using a Jamaican politican views to thrash the Bahamas especially knowing the differences and comparisms, dynamics etc., between Bahamas string of populated islands and Jamaica. Bahamas is not Jamaica.

Ouch. I mashed your corn.

Persons way more educated than me have said those comments. Persons with graduate degrees have said what I have said previously. To paraphrase a bahamian PHD living aboard, Bahamians live in your own little world.

History is filled with "educated" persons like you BONEFISH and even more educated persons than you who have been tearing apart countries spewing poop and using others good names and works to attach to their vile destructive untrue comments. You should have just gone on the websites to find out more on the Bahamian political parties.