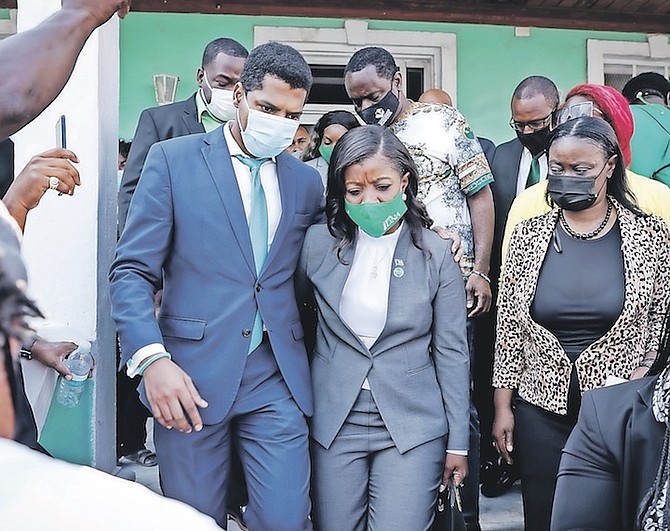 FORMER Democratic National Alliance leader Branville McCartney has questioned whether members of the party acted according to police’s recollection, adding if it were so, the group would have been arrested on the spot.

Mr McCartney was referring to Commissioner of Police Paul Rolle’s assertion that on March 3, members of the DNA had “pushed on officers” in an attempt to gain entry to the House of Assembly. Officials have said the group did not have a permit for their March 3 protest.

On the same day, police allege members of the DNA had also unlawfully assembled at Parliament Square, but the Commissioner said he made the decision to pursue the issue later.

Speaking to The Tribune yesterday, the former Bamboo Town MP said the arrests of nine DNA members, including leader Arinthia Komolafe, was a “travesty to democracy”. The group was released after several hours of questioning at Central Police Station on Monday. After police contacted both Mrs Komolafe and DNA chairman Omar Smith last week, the group went to the station for questioning. Once there, they were arrested.

“Certainly it was a travesty to democracy for what happened to the DNA and Mrs Komolafe,” Mr McCartney said yesterday.

“To me that reeks of politics and it’s a damn shame that something like that is happening and that the police are being used to facilitate it when it in fact we have so many issues going on regarding crime and murders. It’s obvious as to what happened.

“I am flabbergasted that this would have happened in this day and age.”

Mr McCartney further raised the question of the group’s conduct when his attention was drawn to the Commissioner’s account of what took place three weeks ago.

“Don’t you think if there was some pushing they would have been locked up at that time? Come on, man.”

It’s a situation that showed “obvious” bias, Mr McCartney said, adding it led him to offer Mrs Komolafe words of encouragement through WhatsApp.

“I would tell you that I was in court yesterday (Monday) and when I came out and I saw what was happening on social media and I sent Mrs Komolafe a WhatsApp note encouraging her to stand firm and continue to stand for what is right and what is good for the Bahamian people.”

With several political parties gearing up to contest the next general election, Mr McCartney said now is the time for groups to band together.

“I do think that there seems to be quite a number of political parties vying for this election. I would say that there is strength in numbers and if it is at all possible for those parties to look at each other and see how they can work together under one umbrella in going up against those other parties, the PLP and FNM.

“You do have fragmented groups all of which would have their particular support, but if you could bring all of that support together, I think it would have a significant impact in this election so that is something that I would advise.

“I think if you have those fundamental values, I think you should make an attempt to get together and become a large force to contend in this next election.”

Asked why it took three weeks to act on this matter, Commissioner Rolle said Monday that by law he is allowed a timeframe of one year to take action where misdemeanours are concerned.

“I have a year,” he said during a press conference at Police Headquarters after the DNA members were released. “I am saying Parliament was still meeting and I didn’t wish to interfere with that. So, that’s really all there is to it. There is nothing political about it. I don’t see colours. So, whether it’s red, yellow or green, everybody is treated the same. I believe my record on that is straight forward.”

The group was not charged, with Commissioner Rolle saying he had yet to make a determination as to whether anyone will be arraigned in court.

The investigation is continuing and will be wrapped up in a matter of days, he told reporters. If convicted the offences warrant fines and/or prison sentences.

Regardless of what happened on that day two things are obvious: . . The majority of Bahamians sympathized with the DNA and sided with them in this issue. This may not necessarily translate into more votes but Bahamians expect free and fair play in the upcoming elections. No Donald Trump style bullying in these elections, ok. . People are starting to take a second look at Hubert Minnis and some of his MP’s and Cabinet, Marvin Dames not excluded. Does Minnis have a third eye? What exactly are the motives behind the FNM’s pre-election antics? Is the information they getting saying that this is no easy win for Minnis and the FNM? Or are the boots on the ground reporting that it’s a ‘no win’ for Minnis and The FNM? So what will Minnis and Marvin dem do? Extend the Emergency Orders yet another time? Keep Bahamians cornered and at bay beyond the period that is necessary to safely navigate the Corona pandemic? Will Elections 2022 be an unexpected gold rush with a little GREEN renewable energy?

Let this party have peace. How many filthy deeds done by other parties that has been pushed under a rug. Clean the entire system out.