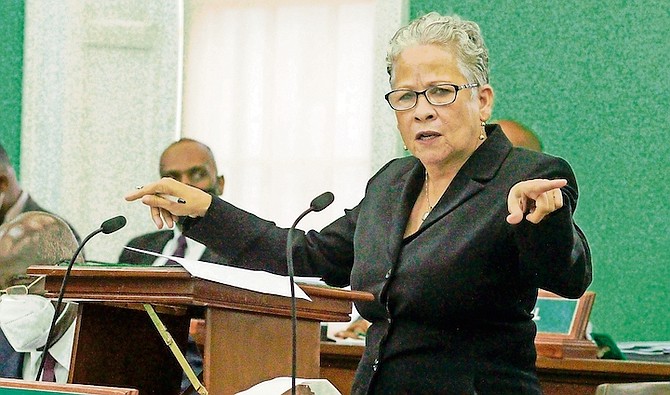 On Tuesday, Mr Bethel told reporters outside Cabinet he was disturbed by the criticism surrounding the matter.

At Parliament yesterday, the MP said she stood in solidarity with the DNA, a move she said was admittedly “unusual”. She also expressed support for Bahamas Department of Correctional Services officers who are upset over a laundry list of grievances. They protested at the Ministry of National Security last week.

Mrs Hanna Martin said: “I am going to do something unusual today, I am going to stand with the members of the DNA today because I heard the dialogue of the Attorney General who I was surprised because the Commissioner says he’s still investigating.

“I heard some comments from the Attorney General, which I thought might have been ill advised having regard to his position in the judicial and legal system, but I heard this talk about how those individuals broke the law and they went into the square and all of this thing.”

She drew attention to a “break away” group that was a part of the 2017 We March protest, suggesting Prime Minister Dr Hubert Minnis, then in opposition, and sitting members of Parliament were part of the group.

The group was not arrested, she said.

“I stand in solidarity with the members of DNA,” she said, adding there had been too much hypocrisy among politicians and officials.

Earlier this week, Mr Bethel said he was surprised by what happened to the DNA members but was disturbed by the criticism surrounding the matter.

“I was as surprised as anybody else in The Bahamas by the events that occurred yesterday,” he said on Tuesday. “It is though disturbing to me - the suggestion that is implicit in a lot of the criticism - that there is a class of Bahamians, namely the political class, who are immune to the rule of the law.

“We understand that there is a distinction between a political action and crime, no question of that, but there may be instances - as has been shown elsewhere quite recently - where political action may cause alarm. The appropriate agency to determine that is the police by an appropriate investigation.

“I have no personal view as to whether a line was crossed, that is not my job, nor do I encourage anybody to speculate on the matter. The appropriate constitutional authority to determine whether a law was broken is the police. They are the investigating arm of the state. Once they have made their determination, they will make that to a constitutionally independent public prosecutor, the director of public prosecutions,” Mr Bethel said.

Commissioner of Police Paul Rolle has asserted that on March 3, members of the DNA had “pushed on officers” in an attempt to gain entry to the House of Assembly. Officials have said the group did not have a permit for their March 3 protest.

On the same day, police allege members of the DNA had also unlawfully assembled at Parliament Square, but the Commissioner has said he made the decision to pursue the issue later instead of arresting the members on site or shortly thereafter.

Well, yes, after I managed reading through the 549-word article - noticing how Glenny's, the AG, and the reporter - somehow, or the other, had totally ignored, ever once, lippin out the worthy name of the DNA's Comrade Sister Arinthia Komolafe?**

They also said that the police were run over, injured. They believe they have tapes of these incidents. They will have to show their tapes. as proof.

What was done to the DNA members seems foolish in my opinion?

Like my dear mother often says, "God has left them to themselves".

They just keep on blunder after blunder. A desperate FNM

MRS&gt; Hanna Martin have them on the run. keep up your good works Ms Martin it is in your DNA. you could not miss it.

Tell 'em, Glenys!! This AG deserves PLENTY criticism. Another one that simply MUST GO!

Mr security minister where is the proof, where are the injured policemen? Liar, liar pants on fire.

Maybe they had to be flown out to a hospital in Miami? That could be the next story. Wait, man i givin' them ideas.