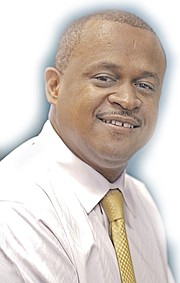 You may remember Rod Bethel. He was the nice-looking, neatly-groomed manager at City Market in Harbour Bay Centre back in the 1990s. Kids and their folks crammed his little aquarium filled with fish, asking questions. He always took time to answer or personally find an item a customer just couldn’t locate.

Bethel and a friend, police sergeant Sean Gibson, went to a party. Sometime after midnight, Bethel and Gibson were sent for more cranberry juice. As they were pulling away, a young woman they both knew, the daughter of an acquaintance, stumbled over to the car and begged to ride with them. She looked stoned or drunk and they were reluctant. She pleaded, said she needed something from near where they were going and they gave in. They told her to get into the rear seat.

When they stopped, she stumbled out and became ill, vomiting and, at some point, “messing herself”, according to court testimony. She fell in the dirt, dirtying her clothes even more, and Bethel and Gibson lifted her, resting her now vomit and mud-streaked body against the hood of the car, kicking themselves mentally for allowing her to ride with them. Once they got her safely back in the car, she passed out, allegedly from a combination of alcohol and marijuana.

They returned to the party which had lost its appeal and headed their separate ways home.

At 5am that day, a team of six uniformed officers swarmed Bethel’s home. Two vans, doors swung back, revealed another 20 officers, dressed in army fatigues and armed with high-powered weapons, sealed off the property, guarding against potential escape. Bethel was stunned.

The officers claimed to be acting on a complaint of rape filed not by the young girl, who had not filed a complaint, but by her mother, who was nowhere near the scene of last night’s events.

Bethel was held for 72 hours though the alleged “victim” did not file a complaint until long after he was arrested. His car was impounded to search for evidence. He had to put up his property to post bail.

Over the next decade as the case Bethel and his attorney have said should never have been filed made its way through the courts, the former role model-turned-public pariah protested the charges and swore his innocence over and over. The girl’s family, he says, had ties to senior police officers. Even the investigating officer, ASP Hamilton-Sands, testified that she did not believe Bethel had sexual intercourse with the complainant. She did not recommend that he be charged. There was never any DNA evidence that a rape had been committed, let alone connecting Bethel to it.

Bethel admits there was one charge he could have been accused of - a lapse in judgement.

It was a lapse that cost him his job, his home, the life he knew before he attended that party. It cost him his snazzy car, but most importantly, the trust and love of his family who shunned him as he doggedly fought for justice with his attorney former Senator and two-term Bahamas Chamber of Commerce president Tanya Wright by his side. Neither ever gave up hope.

On April 6, 2017, Justice Gregory Hilton stated in his ruling: “With regard to the accused Rod Bethel, I find there is no sufficient evidence to connect him to this charge of rape. There was no evidence whatsoever of any common design as it relates to Rape of (party)…”. By declaring that Bethel had no case to answer, Justice Hilton never forwarded the case to the jury.

Four months later, Bethel sued the Commissioner of Police for unlawful arrest. He also filed a suit against the Attorney General for malicious prosecution. And still the legal battles dragged on with Bethel’s life on hold.

No amount of money can ever give Bethel back the years of life he lost, the hugs he did not get from his daughter or granddaughter, the right to live on his own property which was held for surety.

He is not the man who happily answered a wide-eyed child’s question about the fish in the tank at City Market. It seems a lifetime and a world ago.

Here is what senior counsel Tanya Wright has to say: “What this case highlights is the high cost of pursuing law enforcement at the expense of due process.

“Not all crimes are created equal.

“Apart from assaulting a minor, I can think of no greater charge to be falsely and maliciously accused of than rape. When a man dies, you take his soul and he is gone from the earth. When a person is raped, can you imagine feeling as though you have lost your soul and still have to live life in this earth?

“My client is a father of a daughter and a grandfather of a granddaughter who he would give his life for. He is very cognizant of how a false and malicious accusation of rape could have exposed him to serious harm from family members of the alleged victim. This matter is not about compensation. No amount can really do that. But sadly, it is unlikely to bring about the rehabilitation of the mindset of law enforcement predisposed to this ‘you lock up’ mentality with regard to due process.

The Crown has 21 days to appeal.