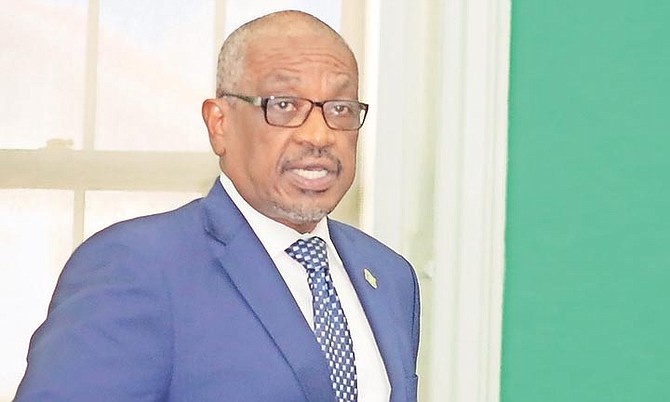 PRIME Minister Dr Hubert Minnis on Friday doubled down on his position against oil drilling in Bahamian territorial waters as Bahamas Petroleum Company (BPC) hopes to renew its four licences.

The company has revealed it plans to seek renewal of its four Bahamas exploration licences even though they announced last month it ceased drilling operations after having failed to find commercially viable volumes of oil.

On Friday, Dr Minnis told reporters in Ragged Island he had not seen “any request” for renewal, but reaffirmed he was “totally” against drilling within the country’s waters as “our waters should be preserved”.

“We have some of the best fish nurseries in the world,” Dr Minnis told reporters at Ragged Island where he accompanied the minister of works on a tour of the progress of major works on the island. “….I think it’s essential for us to preserve that. Protect our marine resources. Protect our waters. That’s our touristic product. That’s our food source. That’s our economy and, yes, oil may make a few people rich but look around the world – does it benefit the entire nation?”

Before their announcement that drilling had not been successful, BPC started its exploration for oil in December. That same month, however, Dr Minnis stated he was against oil drilling in Bahamian waters, but suggested the government could not back out of the oil exploration deal.

At the time he explained: “Unfortunately, we were saddled with an agreement that we met there. When we discussed it with the legal department, we were advised that the commitment and everything was signed and basically, we could not get out of it.”

When he was asked by a reporter if the government had found any legal routes to get out of a possible renewal of these licences, Dr Minnis noted it is a matter to discuss both with the environment minister and the attorney general.

Well, the sludge oil advocate must first address how the sludge mud got smeared all over his sagging credibility's wrinkled face, much noticeable around the mouth's area.
Just makes PopoulacesOrdinarys', that more skeptical of the competent authority, yes?

Weak ass man! I wouldn't even call you a leader or PM bro. You just hubert to me. No respect for you what so ever! Legal team bro! This our motherf*ing country! Yall old ass people is kill me wit yall no balls having ass. I cud neva picture a man who in charge of a country talkin bout is nothing we could do wen u control all tings. Fk the attorney general an environmental minister! All yall is cowards cuz all yall like yall tryna take yall sef out the equation and responsibility yall have to protect our country. Yall so stupid, all yall saying ooohhhhhh well it aint up to me ya gatta talk to dis one an dat one like wtf! I know for a fact yall believe the average bahamian stupid otherwise all yall wouldn't use the same excuse and it's like no one call yall out for it.

Even @stislez doesn't know the answer to your most astute question. LOL