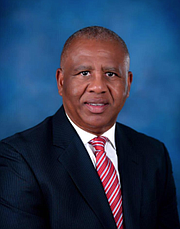 Algernon Cargill, pictured, director of aviation, told Tribune Business the government was proceeding with its compulsory land acquisition and other plans for the airport’s growth despite the April 21, 2021, claim launched by representatives of 3,000 “common” land owners.

The commoners, making good on their threat to pursue Supreme Court redress, are seeking to repossess the land upon which the airport, Water & Sewerage Corporation water fields (now a reverse osmosis plant” and North Eleuthera Garbage Dump now sit on the basis that the government has violated their constitutional and property rights in taking these assets without paying a single cent for it.

The writ and statement of claim, filed on behalf of the Harbour Island Commonage Committee as representative of the commoners, is also seeking an injunction to bar the government and its agencies from accessing the land while claiming multi-million dollar damages over both the airport and Water & Sewerage facilities.

However, Mr Cargill asserted that the action will not threaten or delay the long-awaited airport expansion that is designed to enhance North Eleuthera’s prime aviation gateway and boost access to the island prior to tourism’s full rebound from the COVID-19 pandemic.

“We don’t envision any setbacks,” he told this newspaper. “Our policy is that we don’t comment on any litigation matters but I can tell you the Government is moving ahead with its plans.”

Confirming that work to facilitate the Government’s planned compulsory acquisition of land for the airport expansion is “in the final stages”, Mr Cargill added: “I’m not going to give any details because the matter will soon be before the courts, but I believe most people know the Government has eminent power to acquire land under the Acquisition of Land Act for the good of the Bahamian people.

“It’s a matter the court will have to review and make a determination on. It’s a matter already referred to the Attorney General’s Office. They have the writ and will respond.”

The writ and statement of claim, which have been obtained by Tribune Business, allege that the commoners were granted their rights to a 6,000 acre-site by a Crown grant dating back to July 1, 1842.

However, in alleged breach of the Commonage Act, the committee is alleging that “some time in 1959” the Government “unlawfully constructed the North Eleuthera terminal building and runway on 150 acres of commonage land pursuant to a purported licence”.

This licence, though, was described as in breach of both the Crown grant and the Commonage Act, rendering it “ultra vires, null and void”. However, the Government subsequently took a further 100 acres of commonage land to extend the airport’s runway after obtaining a second licence that was also alleged to be illegal.

The documents, filed by Richette Percentie, of KLA Chambers, on the Committee’s behalf alleged that the Harbour Island Commonage Committee turned down the Government’s overtures about further expanding the airport in 2014.

They accuse the Government of also “unlawfully allowing persons and companies that are non-commoners to enter the airport and operate businesses at a profit, and without any proper compensation or compensation at all to the commoners” - a reference to all the concession operators and services providers that operate from the facility.

And, prior to that, the Water & Sewerage Corporation and Ministry of Public Works were both alleged to have “unlawfully entered” on commonage lands to construct a reverse osmosis plant to supply north Eleuthera, Harbour Island and Spanish Wells, as well as the area’s garbage dump, without “paying any compensation for their purported acquisition and use of the tracts of land”.

The committee alleged that it was forced to initiate legal action after the Government failed to respond to its February 17, 2021, letter urging that the commoners be compensated for the loss of their land and that agreement be reached within seven days,.

They are claiming $1.125m and $2.025m, respectively, for the loss of the airport and Water & Sewerage land, and $135,000 in relation to the garbage dump. Damages and “mesne profits” are also being sought, together with Orders directing the Government to provide for an accounting of all monies collected from the airport and reverse osmosis plant operation.

The figures seem much-changed from those quoted in Ms Percentie’s February 17, 2021, letter in which she sought $25.889m in compensation on behalf of her clients for the past use of their property by the Government and its agencies.

This was broken down into $9.3m and $3.5m for the 150-acre and 100-acre tracts that comprise the North Eleuthera Airport, the latter of which was taken in 1986. The wellfields and dump site were priced at $12.339m and $750,000, respectively, while Ms Percentie said her clients will also seek “damages for the permanent scarring and abuse of the land” by those two facilities.

The 450-acre and 30-acre sites taken for the Water & Sewerage Corporation’s wellfields/reverse osmosis plant and the district dump, respectively, were taken in the mid-1990s. Ms Percentie argued that in the circumstances the Government is “a willful trespasser” on her clients’ land and they will seek its eviction via the courts unless their demands are “speedily” resolved.

Reiterating that the Committee and the commoners were “eager” to see the airport’s expansion “come to fruition” but aghast at how this is being done, she added: “None of those agencies are registered commoners, which is in clear breach of the Commonage Act.

“Additionally, the Government has unlawfully allowed persons and companies that are non-commoners to enter the airport to operate businesses at a profit. These are violations of the Commonage Act.”

Ms Percentie said the Act’s section ten prohibited non-commoners, such as the Government, from holding an interest in commonage land, while section 15 stipulates that any non-commoner using such land is a “willful trespasser” and can be “ejected” from such property.

Tribune Business previously revealed that talks over the airport expansion between the Harbour Island Commonage Committee and the Government initially focused on establishing a partnership arrangement between the two sides. The then-plan was to develop and gazzette “rules” that would enable the commoners to licence the airport land to the Government.

However, the Minnis administration then reversed course in April/May 2020, when it revealed it will now acquire the 658 acres for the airport - the 250-acre existing site, plus an extra 408 acres - via the Acquisition of Land Act rather than the original partnership proposal.

Mr Cargill said the Government changed course because it felt owning the land would provide the airport with a more secure future rather than leasing it from the commonage.

There is a place in Miami called Jethro's that does great food wholsale. Imagine how many cases of food could br brought in for the poor with just $1M out of that $65M could buy!! But, no, they will give coupons for retail. No vision.

After 60 years, you would think that the Brilanders would use common sense if they haven't collected any money for the "commonage land" from the past UBP, PLP or FNM governments.

Silly sheep, the FNM government is not upgrading to service the tourism industry of Harbour Island - they are upgrading it because it's a convenient way to funnel funds back to business affiliates in the private sector. Spending 70 million to expand an airport to a destination that is already at capacity is waste when that destinations lacks the basic infrastructure - roads, water and power..let's not forget waste management services either...Or did you miss that beyond headlines Watson show with raw sewage from Briland being spewed into on the land with being covered or treated...? At most a larger terminal is needed the rest of budget should be allocated to bring the basic utilities of the island..