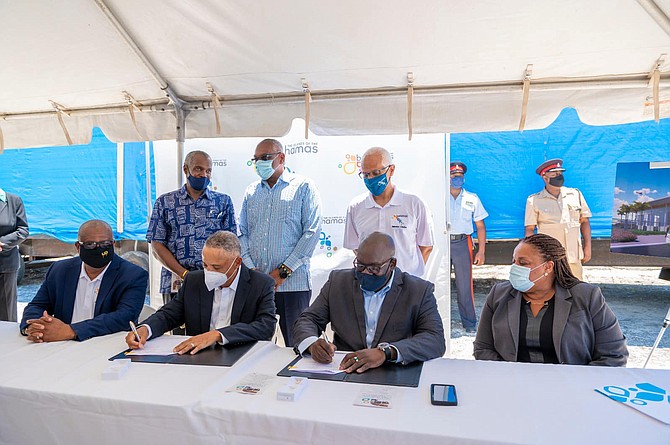 The contract signing for the new Exuma International Airport. Photo: Office of the Prime Minister

PRIME Minister Dr Hubert Minnis led a delegation of government officials to Exuma on Friday for the $65 million contract signing and groundbreaking ceremony for the new Exuma International Airport.

The investment represents the largest ever single investment for a Family Island airport.

Dr Minnis said: “We recognise that airports have a direct positive correlation to the growth of the economy.

“We envisioned that this facility will one day become a major airline hub and cargo facility for the Southern Bahamas.”

Dr Minnis said the master plan for the Exuma airport highlighted a need for airside upgrades to meet international standards; the construction of a new fire station which will also house critical airport mobile equipment; and a new terminal building to accommodate current and future passenger volumes.

He said the 60,000 sq ft air terminal building will have 100 percent emergency power backup and will be designed to require minimum maintenance.

“To mitigate the use of natural resources, efficiency strategies are proposed to make the facilities sustainable,” he said.

“Details of proposed energy and water strategies are presented in the engineering section of the report on the new airport.

“The proposed Exuma land-side parking is comprised of about 108 marked surface spaces.

“It will be located north of the air terminal building for public vehicles, car rental companies and airport and tenant staff.

“The intention is for the parking to be revenue generating to help sustain the airport.”

The airport terminal building was designed by Mike Alexiou of Alexiou and Associates and Stantec International. Woslee Construction Company is the contractor for the project. Dr Minnis said the company has committed to hiring local talent from Exuma first and to recruit from within the Bahamas if the available talent is not on the island.

Ashley Glinton, the president of Woslee Construction, said the company will employ 75 to 100 Bahamians on the project.

He said mobilisation to the site will begin in two weeks and construction will begin shortly after.

Woslee’s contact for the project is $33m and the project’s completion schedule is 20 months.

“As always, we intend on finishing this beautifully designed, state of the art facility on time and within budget,” Mr Glinton said.

We desperately need effective, transparent and meaningful election campaign finance reform laws, but don't ever expect to see the enactment of such legislation under Minnis's watch.

We’re not going to see that under anybody’s watch!

On the positive, eventfully they will be defeated at the final polls!
Should those holding every expectation that the voters in the upcoming General ' Distraction' Election, returns a sufficient enough majority red regime's* field, 35 red+ candidates, back to form a second term Thee Mr. Minnis majority government.
Well, my comrades, all hope for change, shouldn't be shattered completely cause before the next century kicks off January 1, 2101 - they'd all have departed this much cooler surface of the earth, yes?

1.327bn deficit. so the government signs a 65 million contract for the Exuma airport. It is hoped that car parking will help to sustain the revenue.

It makes no sense. the Country's finances are in deep trouble. And God alone knows how long it will take to recover.

A Sensible Government will be cautious. Hold on and wait for some improvements.

@Comrade Birdie, I will I say this seriously because wouldn't you rather for a tiny chunk of the billions is dedicated to Exuma's infrastructures and the jobs and long-term economic benefits it presents.
I'd rather focus energy to advocate for a bi-partisan airport authority to oversee our airports, yes?

@ComradeHobo, even if you might have a valued point is this an evidence-persuasive worthy looking into counter-argument - thinks to call for a totally different debate, yes?

The Government shows us nice contract signing ceremonies ........... but we do not see the details of this contract (WHO will REALLY get the $65million to build this airport) ....... Who will account to the public that $65million will REALLY be spent on the ground on this project????

Will the final product REALLY be worth the investment of $65million ???????? ......... We remember Wolsee Construction and the national baseball stadium ripoff

Its all bs! Why does exuma need a 65m airport again when you have so many bahamians without jobs or anything to eat. This money could be better spent at this time. How will this improve the life of average bahamians when so many are in need.

Well i love the idea they have a great tourism product, but Exuma always had an airport, we in Grand Bahama waiting for ours!

So is Minnis shy to tell the people who got the rest of the contract for the runway and other paving works? Exuma has been on a boom for the past several years, especially with tourism. And yes, they deserve this airport, especially if it will be a hub for the Sourhern Bahamas.