The Rise Of Nfts 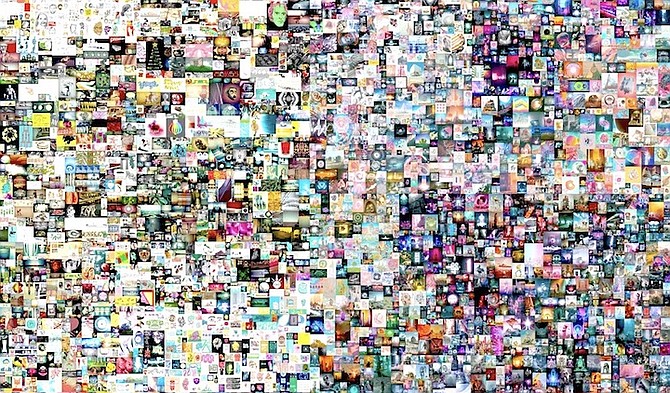 THE artistic world has through the years provided many anecdotes that illustrate the subjectivity of the concept of value.

One such moment is the story of Yves Klein, a French avant-garde artist active during the 1950s and 60s, who once convinced a visiting couple of rich Americans to pay $2000 worth of gold ingots for nothing more than Paris fresh air and a receipt confirming the purchase of a “Zone of Immaterial Pictorial Sensibility”. The ‘artist’ then proceeded to ask the buyers to burn the receipt and, once they did, threw half of the gold into the River Seine, as an art dealer and a museum curator looked on with incredulity, while also conferring “artistic legitimacy” to the transaction.

Beauty is the eye of the beholder, as the saying goes, and it appears that value is in the pockets of the buyer.

Many will be surprised to hear that the third most expensive artwork ever sold by a living artist, costing $69m, cannot be used as a decorative piece in a mansion or hang on a palace wall. In fact, it won’t ever even be touched because it only exists in digital format. Sold at auction house Christie’s in March this year and named “Everydays: the first 5000 days”, the piece is a patchwork of 5000 digital images created by Beeple, an American graphic artist. Crucially, the work is freely available to download and share by anyone with an internet connection.

So, what did the buyer pay $69m for? Not the artwork itself; rather, a receipt that can be used as proof of ownership of the original digital file. Such receipts are known as “non-fungible-tokens” or NFTs. These are unique files based on blockchain technology, that allow verification of the digital file’s ownership. In a way, purchasers of these tokens are just buying the right to claim ownership, and to sell those same rights at a later stage.

The incredible rise of NFTs - and the shockingly high prices at which some are being transacted - is undoubtedly part of a wider speculative wave of blockchain-based products, with cryptocurrencies such as bitcoin and dogecoin (which surged 15000 percent since the beginning of the year - not bad for a coin based on a dog meme that started of as a joke) capturing headlines and rallying to levels few thought possible only a year ago.

Some argue that this speculative fever resembles a pyramid scheme, where those who got in early stand to benefit financially by, through social media hype and mediatic stunts, bringing others into the game in order to inflate prices. This is perhaps a harsh and too-simplistic view of a complex dynamic that has attracted several heavyweight investors, who see cryptos as a way to mitigate the devaluing effect that a potential rise in inflation may have over traditional currencies.

However, during the last atypical 12 months most of the investment in blockchain based instruments came from locked-at-home traders, a phenomenon a Bloomberg columnist called the “boredom market hypothesis”. With life slowly returning to normal, it will be interesting to see what happens in these markets.