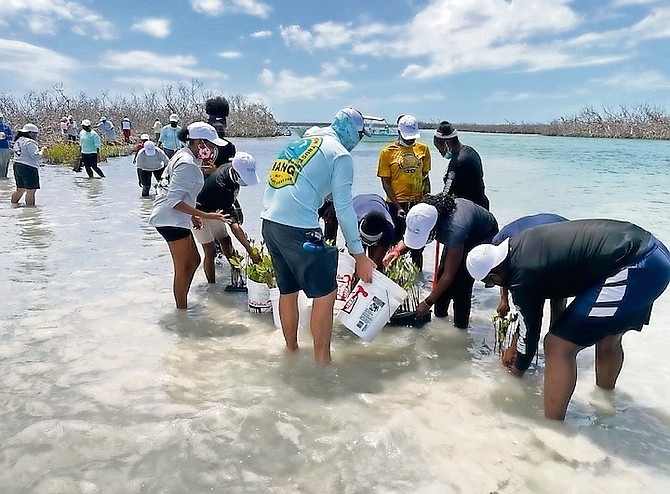 MANGROVE restoration is underway in Grand Bahama and Abaco, where replanting events have taken place, bringing the total number of mangroves planted to over 10,000.

The event held on Saturday, May 8, was hailed as “a great success.”

“We had 60 people in attendance, and it was truly a collaborative effort.”

According to Mr Lewis, about 40,000 acres of mangroves were destroyed and damaged on Grand Bahama and Abaco.

The BTT, along with the University of Alabama, conducted detailed surveys in GB and Abaco.

“So, in total it is over 40,000 acres of mangroves in the Northern Bahamas that got destroyed,” Mr Lewis said.

That type of destruction is very rare, he explained.

“Usually what happens with mangroves’ death after a storm, it is very patchy and there are areas adjacent to the impacted areas that can reseed, but in this case, it is so vast that reseeding naturally will take an extremely long time.

“And so that is why we jumped in to help kick start and help ‘Mother Nature’ along.”

Mr Lewis said the seedlings will generally catch in a month.

“They will start growing immediately and once we plant them, their roots will start to expand and stabilise,” he added.

The seedlings will get to adult size within three to five years and will start to reseed on their own in surrounding areas, he said.

“We are not trying to replace every mangrove that was lost, but instead trying to kick start recovery and focus our planting in areas where there were previously adult mangroves,” Mr Lewis stated.

Mr Lewis said they decided to plant along creek edges where there is more nutrition, like at Romer Creek, which allows red mangroves to grow to adult size and produce seeds.

He believes that the seedlings produced will be swept into adjacent areas where there are dwarf red mangroves that are stunted and rarely produce seeds.

Mr Lewis said Roemer Creek, which is a few miles northeast of Crown Haven, Abaco, is the perfect area for replanting.

“Importantly, that area had previous living adult mangroves because of how the channel is set up and is a high-nutrient area that allows them to get to adult size and reseed.

“And with the channel being adjacent to it is a good way for dispersal of seeds to the surrounding area. Once the seeds drop with the current going to channel it will disperse seeds to a wide area,” he stated.

Mr Lewis said BTT plans on doing more planting, especially this year and over the next three to five years.

“We are doing some work this summer. Abaco is the next big step and we will be focusing on an area on the west side of Abaco, which is a very large area called the Marls,” he said.

BTT is a science-based non-profit organisation based in the US. It has working partnerships with the Bahamas National Trust; Friends of the Environment, a grassroots NGO in Abaco; and MANG, a clothing retail company that does a lot of mangrove restoration work in Florida.

More information about the project can be found at http://www.bonefishtarpontrust.org/btt-events/ mangrove-restoration-project/