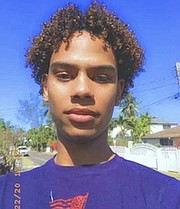 ALEX Kemp was on his way to work in Abaco when he lost control of his car on Saturday and died after hitting a utility pole.

The 21-year-old was one of two deaths on the island as a result of separate incidents. The other accident happened on Friday night.

Since his son’s death, Andrew Kemp, who spoke to The Tribune from New Providence, said he has been unable to sleep. Mr Kemp learned about his son's death from his daughter.

“I can’t explain it,” he said. “(It is) something no parent want to go through.”

Police said shortly before 8am they received information of a traffic fatality in the area of Cherokee Sound Highway, involving an aqua Suzuki Swift driven in a northerly direction by an adult male.

"Further enquiries that the lone male driver, who attempted to overtake a vehicle, lost control and collided into a utility pole. EMS personnel attended the scene and pronounce the male lifeless."

Alex lived in Nassau but moved to Abaco in February. He was living in Winding Bay and worked as hotel concierge at the Abaco Beach Resort.

“He was making friends," his father said. "He was only there for three months and my daughter, and his co-workers and his roommate (were his friends).

“He’s a person you could get along with and make friends and he wanted the (different) experience from the city life.”

He described his son as “full of life” and “a happy person at all times”. He said the two had a good relationship.

Many friends and loved ones posted photos and messages about the 21-year-old’s devastating death on social media.

Police said the BMW was heading west on the highway when the driver lost control, swerving into the eastbound lane and collided head on with the Dodge Caravan. Both male occupants of the BMW had to be extracted from the car using the Jaws of Life. The BMW's male passenger was pronounced dead at the scene, while the BMW's male driver and the Dodge Caravan's female driver were taken to the area clinic for medical attention. The BMW's driver received injuries to his leg while the woman driver in the other vehicle also received serious injuries, but is said to be in stable condition.

The men in the BMW are said to be residents of Treasure Cay, Abaco while the woman driver is a resident of Murphy Town, Abaco.

After the two accidents, police are urging the public to slow down and obey speed limits “to drive to arrive alive”.