DIANE PHILLIPS: This isn’t the first time we’ve had to get tough to beat a disease 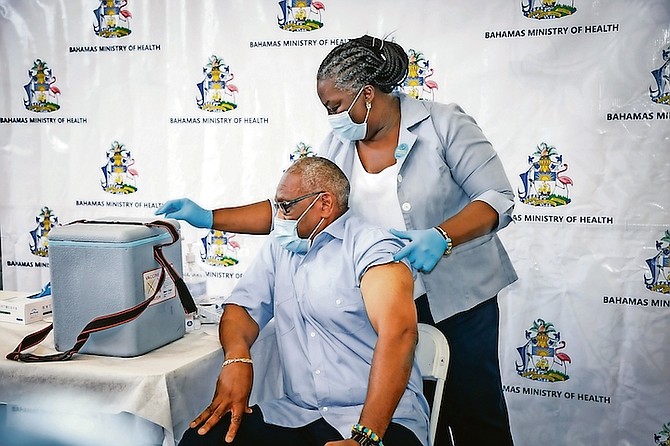 Prime Minister Dr Hubert Minnis leading the way as he receives his second dose of the COVID-19 vaccine earlier this month, administered by nurse Bastian.

WHEN the first local cases of COVID-19 were reported in March last year, The Bahamas headed by a medically trained Prime Minister, got tough.

It wasn’t the first time - wait till you see what we did long before those of us writing or reading this today were alive. But it was predictable. In my column of March 27, 2020, I wrote: “When you consider that Hubert A Minnis has been a doctor ten times longer than he has been Prime Minister, you can appreciate his medical stop-the-spread-at-any-cost approach to COVID-19.”

So the doctor/Prime Minister immediately limited the number of touchpoints and opportunities for interaction. That was quickly followed by full emergency powers that went beyond a shutdown of schools, public gatherings and non-essential business and commanded that we stay inside except for 90 minutes a day during which we would be allowed fresh air in our own yard so long as we wore a mask.

We acquiesced. What else could we do?

We grumbled, we obeyed. It is what we always do. Grumble and then do what we are told.

But now as the country prepares to re-open fully with airlines reporting excellent bookings for June and even more for July, with major hotels looking at up to 80 percent occupancy as the summer wears on and with Royal Caribbean and Crystal Cruises announcing they will homeport in The Bahamas, it is worth looking at how far we have come to reach this level of comfort and what we have to do to make sure we don’t blow it.

First, we need to stop criticising those who are insisting on staff, crew or visitors either being fully vaccinated or showing a negative rapid antigen test result. Anything short of that as people start to move about freely and visitors arrive from all over the world is inviting a resurgence of a spread or even a super spread.

It’s not a crime to be afraid of a virus that can kill or leave long-lasting effects on mental and physical health. It’s already killed the economy. Do you really want to go through that again? Applaud the hotels like Atlantis that are requiring anyone working on the premises to be tested every five days and Royal Caribbean for insisting that every crew member and all guests over 18 be fully vaccinated.

This isn’t about someone’s freedom. This is about survival. If you don’t want to get vaccinated, fine. But understand that you will pay the price of being barred from some safer environments until we reach herd immunity and this nightmare is behind us.

Secondly, this is a great time for officials, NGOs and businesses to get creative and incentivise vaccination. Look at the results in Ohio after the state which had an inordinately high rate of COVID introduced the Vax-a-million lottery. Adults offered their arms up for a jab and a shot at being one of five lucky winners of a million-dollar prize. The lottery extended to 12 to 17-year-olds who got a chance at a full scholarship to any Ohio state college or university. Within 14 days of the introduction of the lottery, vaccinations shot up and the rate of new cases declined by a whopping 35 percent.

Thirdly, why are we all so shocked by The Bahamas taking a tough stand on slamming the door on the face of disease? Look at the surprising history of how we’ve done it before. We built a whole quarantine headquarters and convalescent hospital on Athol Island to separate those infected from those who could become infected. No one balked at the ambitious undertaking in response to the 1852-53 cholera outbreak. According to an article by Kelly Delancy in the 2018 Journal of the Bahamas Historical Society, the outbreak was taking some 70 lives a week and the death toll in Nassau reached 696 with Harbour island and Eleuthera reporting nearly 400 by the time cholera gave way to a series of yellow fever outbreaks.

A SKETCH of the Athol Island Quarantine Station - used to check for disease on incoming vessels in the 19th century.

With the construction of the Athol Island Quarantine Station - and harbour pilots stopping incoming vessels to check for disease in the mid-19th century - The Bahamas was applauded for being first in the region to take such strong measures to keep the deadly disease from overwhelming the country and its people.

That quarantine station accessible only by boat and located north of eastern Nassau remained operational until the violent hurricane of 1929 damaged it so severely that it was abandoned. In 2004, Delancy reports that archaeologists “identified ruins of the convalescent hospital, store, physician’s office, keeper’s dwelling, keeper’s kitchen, flagstaff, latrine building, stone jetty and access steps from the original wharf.”

Though the original pier is little more than broken pilings and jutting rebar, the courageous among us can anchor off Athol Island near the beach and clamber over the rocks to the highest elevation to see what remains of the steps and a foundation that remind us – this is not our first go-round with taking strong measures to keep disease at bay. Strong measures are demanded if we are to go on living in a country that depends on a moving local population and those who migrate for pleasure or commerce. We can do it by raising our arm for a vaccine or we can raise our hand in protest and drag this tragedy out even longer than it needs to be.

Anyone want to offer a million-dollar prize for Bahamasvax-a-winner?

If you ever wondered where the word quarantine came from…

Every new thing we think is novel has a past. The subject of quarantine sent me on a search to learn where this somewhat awkward word got its start. Turns out it was nearly 800 years ago when Europe wanted to protect its coastal settlements from plagues and epidemics. The word comes from the Italian quaranta giorni, meaning 40 days, which makes perfectly good sense considering that the root quar mans four. Think quartet or quartering a chicken ahead of souse.