Minnis: We Have Not Yet Completed Marijuana Legislation 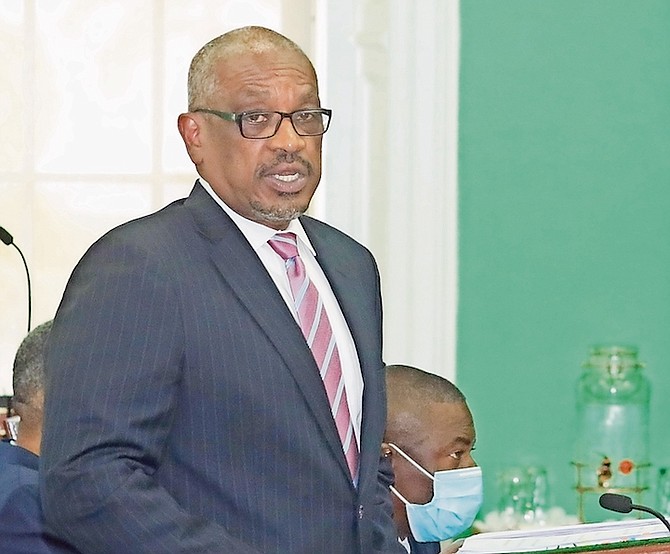 DESPITE recent talks of marijuana legislation being tabled in the House of Assembly in upcoming weeks, Prime Minister Dr Hubert Minnis said the bill, which will specifically look at the regulation of medicinal cannabis in the country, has yet to be finalised.

He made the comments while speaking to the press after viewing the body of former Cabinet minister, the late Sir Charles Carter, who lay in state in the House of Assembly last Friday.

“With respect to marijuana, we have not yet completed the marijuana bill,” he said. “We’re looking specifically at medicinal marijuana, and we’ll have just like we did with the National Drug Plan where they had specific committees that monitored disease processes so that new diseases can be added to the list of the requirement(s) for marijuana.”

Dr Minnis said they would also have a “specific committee” to ensure that even the physicians who are involved in prescribing marijuana as a medication will go through “special training and understanding” to avoid any “abuse or mishandling”. He also said it would be handled “almost similar to narcotics”.

“As you know, as a physician, we can only prescribe a certain amount of let’s say morphine, cocaine, etc, and that is to monitor the situation so that we don’t end up in a situation where individuals or physicians themselves abuse it, so we’re looking at it very closely,” he explained.

When asked if he could say when the bill would be tabled in the House of Assembly, Dr Minnis said he could not answer that question at this “particular point in time”.

“Obviously you know we’ve gone through a process already in the House of Assembly and we would be doing the budgetary items at this point in time,” he said.

“So, we would meet as a grouping — ministers, parliamentarians — and we would prepare to present our budget and our future plans for the Bahamian people and we would be specifically concentrating on delivering, making available at least about $50 million annually for young people and for Bahamians at large, so that they could use that to invest and start their entrepreneurship and businesses that they want to.”

If a draft amendment to the Dangerous Drugs Act — which was circulated earlier this month — becomes law, people who are caught with two ounces of cannabis or less would face a fixed penalty of $500.

The penalty, if finalised, would be one of the largest fines in the region among countries that have decriminalised small amounts of marijuana. The maximum fine in St Vincent and the Grenadines for having two ounces of cannabis or less is $185 while the fine in Jamaica is only $5. Some Caribbean countries offer no penalties for possessing specified amounts of marijuana.

A draft Medical Cannabis Bill has also been circulated, which outlines that medicinal marijuana would only be allowed to be smoked in a private residence or a medical facility.

A patient smoking medical marijuana outside these areas would be committing an offence.

The leaked bills are not the final versions of the legislation.

Nonetheless, it would remain illegal to possess any amount of marijuana for non-medical purposes in the country if the draft legislation passes Parliament and is enacted. However, people caught with two ounces or less of the substance would be given a notice similar to what traffic violators receive when they commit offences. They would not be arrested or detained.

According to one of the draft bills, people would have 30 days from the date of their notice to pay their penalty to the Public Treasury in New Providence or in Grand Bahama or to any Magistrate’s Court or Administrator’s Office on other islands.

Police officers can refer people to the National Drug Council, or another body prescribed by the minister if a person in possession of two ounces of cannabis or less is either under 18 or is older than 18 but has received a fixed penalty notice more than once within a three-month period.

People who do not pay the fixed penalty would be required to perform unpaid work for no fewer than 40 hours and no more than 360 hours as specified by courts. Judges can fine such people $1,000 if they are not satisfied that arrangements can be made for them to perform work under an order or for them to be properly supervised.

Under the draft bill, people who have more than two ounces of cannabis could still face severe punishment, including up to ten years in prison or a fine not exceeding $100,000.

Please stop the bullshyt and simply legalize possession of under 2 ounces. NOTHING else makes any damn sense!!

I remind you that the prime minister is not a king. No PM, has the authority to order weed or anything else, legal. “No man is good enough to govern another man without that other's consent,” yes?

I urge the Government to really reconsider legalizing this poison. Please have the testicular fortitude to say marijuana will continue to be illegal. Look at the health problems in our country caused by smoking marijuana. Obesity, violence, High Blood Pressure, BiPolar mental problems, female abuse and the list goes on. Look at the nation of Singapore. They are one of the world’s most competitive and productive nations and marijuana is illegal. There is no demand for this drug whatsoever. Compare Singapore to Jamaica and you will get my point.

Mr. Impirialist, Your logic is seriously flawed. The only reason that Singapore does so well financially is because you are sentenced to a public caning if you spit on the street or are caught chewing gum. both of which cause Obesity, high hypertension, and bi-polar,, as everyone knows.. Just compare the per capita murder rate in the UK or Canada,where possession of mariuana for personal consumption is legal, with The Bahamas where it is illegal. See my point?

i agree with you on the holes in the argument but not on the stance. I think theyve put just as much thought into this marijuana issue that they put into the gaming. Its all about how much money THEY can get. A new batch of addicts will be created and families destroyed with this legalization. Theres no if ands or buts about that. Im sure they'll have a march through downtown soon with all the marijuana supporters. 4 years from now the doctors and psychiatrists will tell us about the damage, it wont be the majority but it will be enough. then the growers will establish a fund to ... show how much they care.

don't get out much huh?

Try meditation and exercise for your altered state of consciousness. Leave marijuana and alcohol, the twin destroyers, alone. Strengthen your faith in the Almighty and stop looking for excuses to destroy our youth.

So they should also ban alcohol, fast foods, most Bahamian dishes and a host of other stuff because they all lead to the issues you are talking about.

Dr.Minnis does this all the time.He makes grand pronouncements and policy decisions to the media .This is done without his clear cut understanding of the policy decisions and consulting his colleagues. He is simply horrible as prime minister. He is giving Mr. Christie a run for his money.

I agree with thisisours. Minnis only formula is who has the money democracy. We got swing to vote for Minnis. Both Gaming and Marijuana were in acted to benefit 0.005 green money. He does not care about voters we cannot satisfy him. He only need us as flippened tokens. Even the average street police was shocked the Marijuana would be legal only for his five millionaire growers who would be untouchable with acres of weed while a person among some fifty thousand recreational users will be locked up or fined. Might as well keep the current laws on the books, illegal for all.

Minnis has bolted 360° around fifty years of Bahamian dreams and expectation. We have been made out casts with no say in our own land by the have money have all the say democracy Minnis style. Now only joy for the elite five to make money. While users pay continue paying fines and incarseration. This will buried on arrival.

Can we please legalize medical marijuana soon - my back hurts!!!

What's me to do when my personal Lawyer/family member was elevated to sit highest up on Relm's Court bench? Whom shall be making legal medicinal use consult contact with, pertaining to, am I goin' be sittin' okay with the continuation of mixing up batches my specially developed ingredients required to bake from scratch, my HomeBaked Brownies, tuning out be sufficiently medicinally potent effective enough yes?

Could someone please tell me what value is derived from smoking or eating marijuana? Absolutely nothing. What are the consequences from smoking marijuana? Wild unfulfillable illusions, hunger leading to gluttony, trances where individuals become spaced out zombies and the list continues. As I am urging try meditation and yoga, exercise and prayers. I bet you our nation will be transformed. Let’s give it a try.

Yoga. Most people know of yoga through reading. At a slower point in time say the 70's many Bahamians tried both meditation and Marijuana. As the world got more instant yoga lost its appeal. Curious though to compare the two. Menopausal women sure are old enough over 16 to could make a decision for her body and family without the stigma of government having a microscope up your life. I am not sure of the value of breath control toward sexual potency for women like Marijuana brings. I have certification on Marijuana through The Canadian Public Health Authority. Government is imposing critical criminal stigma on the relaxation benefits of Marijuana for adults if they do chose to use it.