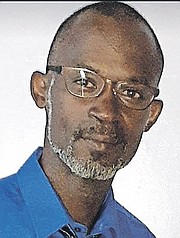 A FAMILY is devastated by the “senseless” killing of 43-year-old Charles Taylor, who, they say, was an innocent bystander shot at the Platinum Sporting and Hookah Lounge at Eight Mile Rock last Tuesday.

Mr Taylor was hit in the neck by a stray bullet when several men discharged a firearm in the establishment. He died on the scene.

A second man was also shot and taken to hospital.

“He was an innocent bystander,” he told The Tribune. “I am taking it pretty hard because we were very close – he was my little brother.”

Police have classified the incident as a homicide.

According to reports, the shooting occurred shortly after 10.30pm on Tuesday. Police reports said two men were standing outside in front of the business when an unknown man approached them. The suspect produced a firearm and fired in their direction.

Both men sustained injuries to the body. EMS pronounced one of the men dead at the scene, and the second man was taken by ambulance to the Rand Memorial Hospital.

On Sunday, ASP Stephen Rolle confirmed the deceased is Charles Taylor, 43, of Jones Town, Eight Mile Rock. He said there is no further update and an investigation is continuing.

Meanwhile, Mr Taylor’s brother said he was made to understand that some guys had a quarrel with someone else, and not his brother.

“What I understand is the guys were coming to the club shooting after another gentleman they were chasing. One of the shots missed and hit my brother in the neck, killing him,” the brother claimed.

“I got the phone call from my mother that my brother got shot. She was not sure and asked me to please find out if it was him.”

Mr Taylor went to the Rand Memorial Hospital to check, but the ambulance had not arrived.

“When I went to the hospital, people were saying that two got shot – one dead and one is alive. So not knowing which was dead and alive, I stayed there for an hour and the ambulance finally came.

“I looked in to see if that was my brother because the ambulance doesn’t bring dead people to the hospital. So, when I saw the other guy come out of the ambulance holding his shoulder, I was like it got to be my brother.”

Mr Taylor said his brother had just dropped his wife home before he was killed.

“They were home relaxing, and he just went down there for a little ride, not even 10 minutes he was there for; his life was gone in a quick ten minutes.

“It is rough for my family. My mother is hanging in there pretty good. I am actually taking it hard because we were very close and tight. You could not get between us.

“So, it was rough for everybody, but a little harder for me. I have been trying to stay around people to keep positive and from blowing my mind out. It is pretty rough... We always talked about what we gone do and how we will watch our kids grow up.”

Mr Taylor said his brother was the father of a one-year-old.

“That was his only child. Now he must grow up without his daddy who died by accident. And that is the worst part about this – it is a senseless death.”

Mr Taylor said his brother was a hardworking man – he was a wonderful painter and carpenter, and a good fisherman.

“You know when people in the street doing fool and die, you know that it was coming. But when someone dies senseless who does not cause problems, and they die like that unexpectedly, it is devastating. So that is why it is so hard. Every day you got to cope with it.

“His wife is taking it hard also. It is hard when you got a whole healthy person with no sickness – went out and then you hear (he) got killed over some foolishness. Yes, family is taking it hard.”

Mr Taylor believes the police have three to four men in custody. He also said he understands there was video footage of the shooting.

He said he and his brother were supposed to hang out the night after his shooting.

“My nephew them came from Bimini on Wednesday and so we all were supposed to hang out, relax, and talk about old times, but it didn’t turn out that way. We are now talking about making funeral preparations,” he said.

Can't even go out and enjoy yourself without getting shot by these animals.

They're not animals. There might be some real sociopaths among them but for the most part these are kids who just never had any guidance growing up... on second thought, they had guidance. someone taught them that if someone made you mad or disrespected you or stole something from you the answer was to shoot them and not care who you hurt in the exercise.

The answer to most of it is simple. Train up the child. We've been given all the instructions.

Please don't insult animals, they are by far better.

animals that are in pain are extremely dangerous. Its one of the things we do have in common

"But when someone dies senseless who does not cause problems, and they die like that unexpectedly, it is devastating."

When people hurt children, elderly people or really good people I always think the purpose is "the outrage".

Most of these ppl with guns think that the guns don't kill when fired ..... Like the actor on a movie set. We live in a time when there is an alternate universe mentality.