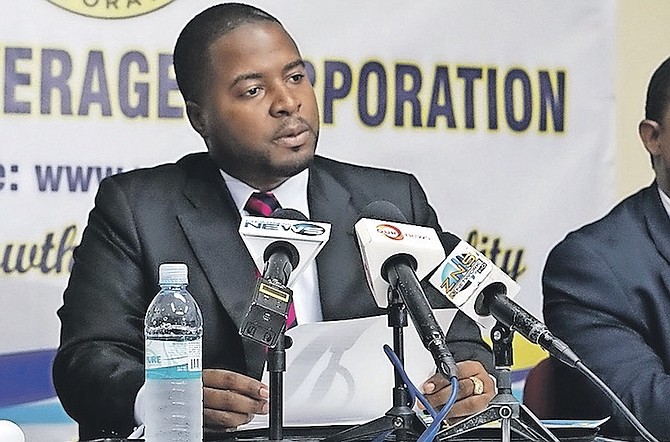 LONG Island MP Adrian Gibson has taken issue with an article appearing in a local daily saying it contains evidence of “parroting a political claptrap” on social media.

The article titled, “Gibson tried to speak privately to magistrate in defamation case” appeared on the front page of The Nassau Guardian yesterday.

The article said the former Water and Sewerage Corporation executive chairman barged into a courtroom and interrupted the magistrate who was on lunch break because he wanted to speak to her privately.

The trial in question is being presided over by Chief Magistrate Joyann Ferguson-Pratt and it involves contractor Gregory Miller who is being accused of defaming Mr Gibson by transferring $200 to his RBC account on December 31, 2018. He is also accused of making defamatory remarks during a TV appearance in June 2019.

Yesterday in a statement, Mr Gibson gave his version of the story calling the article, “inaccurate”.

This morning, I read a story in The Nassau Guardian that asserts that I ‘barged’ into a courtroom and disrupted a magistrate during her lunch break in an effort to speak to her privately,” Mr Gibson said.

“That is inaccurate reporting and evidences a parroting of political claptrap on social media that has become all too common and demonstrates not the slightest effort to be fair and balanced.

“Interestingly, the story also gives an account of what was happening outside of the court (ie references to purported ‘loud complaining’ of the defendant) and what was supposedly happening inside the court – all at the same time,” he said.

Chief Magistrate Ferguson-Pratt is quoted in the Guardian’s article as saying, “Mr Gibson, I see myself as a referee, to hear both sides. As an officer of the court, you should have never come to me.”

It says she then asked Mr Gibson to state what he wanted to tell her publicly. And, that he addressed press reports that the magistrate had given prosecutors a final adjournment after witnesses had failed to appear.

In his statement, Mr Gibson continued to defend himself indicating possible legal action.

“Contrary to the story, in my comments before the court, I did not reference any press reports as I am unaware of any prior mainstream press report on these proceedings,” he said.

“Today, and in recent weeks, I have instructed my legal counsel to take note of certain liberties being taken with a view to bringing actions, as necessary.”

Listing his version of the facts, Mr Gibson said former Works Minister Desmond Bannister and three other prosecution witnesses attended court at 10am Monday. Mr Gibson is claiming that he nor the other witnesses knew of the previous court dates for the trial.

He is also refuting the article’s claims that he tried to speak privately to court officials.

“During that time, Chief Magistrate Joyann Ferguson-Pratt informed us that there were three prior hearings of the case and that yesterday had been set down for a final adjournment given that none of the witnesses had previously appeared for trial,” he said. “Put simply, the case would have been dismissed if we had not shown up yesterday.

“Having discussed certain matters with external counsel and, given the magistrate’s comments during the earlier hearing, I sought to speak with the prosecutor. I attempted to reach him by phone but was unable to do so.

“However, I took note of when he later entered the courtroom.

“Given the same, I subsequently entered the courtroom where he was sitting and had begun chatting with the Magistrate. At no time did I barge into a courtroom, as was falsely and sensationally reported.”

Mr Gibson explained his version of how the magistrate handled the situation of him having to bring something to the court’s attention.

“I did not expect to see the magistrate when I entered the court room as the matter had not yet been reconvened,” he said. “Upon seeing her, I bowed and, in open court (not in chambers, side bar or anywhere else), I then indicated to the magistrate that there were two issues that I was desirous to bring to the court’s attention,” he said. “At no time did I seek to speak privately or circumvent protocol.

“The magistrate then stated that if that was the case, both the defence counsel and the defendant would have to be present. I had no issues with that and stated the same. I then informed the magistrate that I wanted to speak to the prosecutor beforehand.

“The prosecutor stepped out and we went into a small room in the foyer of the court. At that time, I apprised him of what I intended to say to the court. Following that conversation, we returned to the courtroom. Mr Ian Cargill - counsel for the defendant - was already seated. The magistrate then asked her clerk to invite the defendant into the room.”

Mr Gibson said it was he who requested that what he had to say be put on the court’s record.

He said the magistrate then directed her clerk to also call the press into the courtroom and once that happened, the magistrate publicly commented that she did not want to see me privately and that defence counsel and the defendant should always be present.

“I then stated that that was never my intent,” he continued. “At that juncture, I informed the magistrate that I had heard her comments earlier that morning about that day having been set down as a final adjournment because none of the prosecution witnesses had shown up to testify.

“I reiterated that I had not received any summons to appear and informed her that I had recently written a letter to the commissioner of police and director of public prosecutions seeking clarity on the same and that I was subsequently served summons a week ago.

“That, given the likely prospect of the court fixing further hearing dates, that I wanted to inform the court of upcoming parliamentary debates - namely, the ongoing debate on the Speech from the Throne and the upcoming Debate on the Supplemental Budget, which would likely require my attendance in Parliament for consecutive days of debate,” he said.

Due to the lack of a stenographer, the trial was adjourned to December 7.

does the courtroom have cameras? perhaps the press can be allowed to review to get an objective reporting of what happened. Nobody can see into Mr Gibsons brain about wjo hd intended to speak with when he barged/quietly opened the door. The Magistrate by her statement seemed to have thought he had sought her out.

This wouldnt be the furst time Mr Gibson sought privilege above the norm as Desmond Bannister had to tell him he couldnt just bring an investor to his office. At that time Mr Bannister also sought to imprrss upon the public that he had no part in the arrangement

Comrades, just so we get point leadership reference!
Two leadership contenders with (A). Levelling Parroting of Political Claptrap, (A). Some persons were inclined to misbehave, and I'm not making anything and all else like this up.
RED ALERT! The Red Ship may yet be Captained by either (A) or (B)., — Yes?

Give it up my brother. Losing cause.You wont win this one.

Its comical that all of a sudden they all have voices.