$7,000 a month for unused COVID trackers 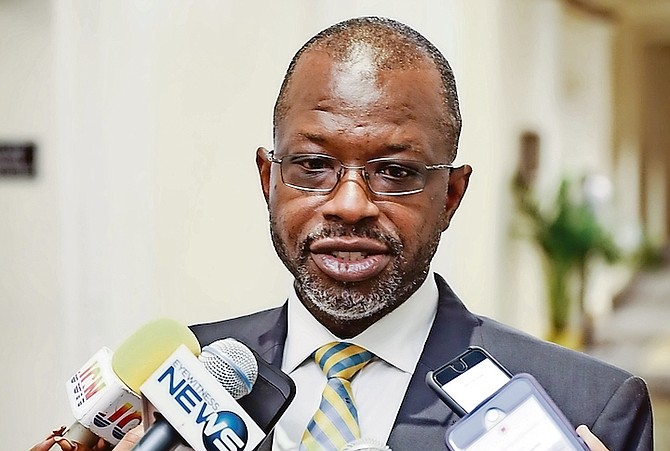 NATIONAL Security Minister Wayne Munroe revealed that the government has been paying $7,000 per month for COVID-19 tracking devices that have never been used.

He said the Davis administration believes the devices, brought in by the Minnis administration, are useful and will be deployed to help track people who should be in quarantine.

He said the contract for the product expires in March.

“So during this COVID emergency, the Bahamian people have so far paid about $70,000 to track persons who ought to be in quarantine without it being deployed at all,” he told reporters during a press conference at the Office of the Prime Minister yesterday.

Initially, the Minnis administration planned to monitor people in quarantine using digital technology provided by Hubbcat Solution. It was expected that the software would be installed on a person’s phone, enabling tracking services.

“Hubbcat,” Mr Munroe said, “was the beginning model with apps on your phone but all one needs to know is that I have three cell phones and I can let you put the app on any one of them and when you call me someone just needs to answer my phone.

“That was abandoned in exchange for what is in effect a tagging system where there would be a little tag, almost like what you see the hotels put on the individual. There would be a base set and if the tag moved out of the base set it would be an alarm and the person would be geotagged to an area in which they were to quarantine. It seems to be a useful product. The Minister of Health Dr Darville is keen on using it and we expect shortly to at least roll out and use the 100 units that we pay seven thousand some amount for. The past administration was spending public funds for a product that was designed to track people and ensure that they stay in quarantine and they chose not to use it for whatever reason.”

Mr Munroe also said he is still investigating his predecessor’s acquisition of drone technology. The Minnis administration had signed a $17m contract with California-based Swift Systems.

“This drone programme, we have paid out a lot, a lot of money. We haven’t gotten much product in exchange for that vast payment and we are currently investigating to get to the bottom of what has happened,” Mr Munroe said.

“Generally, my disposition is that CCTV coverage of New Providence is not wide enough, that we need to improve and expand the coverage of CCTV in New Providence,” he said. “I am told by the member of Parliament for Centreville where (a recent) shooting took place that people are refusing to make available to the police their private CCTV material and that only brings home that public CCTV is necessary, particularly in spots where they would be useful in identifying perpetrators of crime. So true to the mandate, I will be approaching The Bahamas government to expand these resources of the Royal Bahama Police Force so that they may properly do their jobs.”

They probably did not use them for legal reasons.

It just stupid to buy the gadgets.

It is only 100 and will be used to track chosen few.

I would really, really, really prefer to hear about what you are doing to improve the prison, police force, and your other real mandates...... rather than all this divisive digging up of mistakes made by the previous administration. What are your plans and how far along are you in realizing your plans, sir?

This government doesn't seem to have a plan for anything. 2 months in and nothing but excuses and blame game

But they "keeping: all the "mistakes" to use!! Now either they lying or the last government made some good decisions. . .things that could or would work!! Oh he "doin a dr darville" on us!! Darville say he did all the work with the vaccines after they come in government. . .like ween know them vaccines them were gotten almost one year now!!

I am begining to think that Munroe is in over his head too!!

Same old, same old! Why would anybody believe any changes would happen.

Brave, his wife, and entourage are probably paying way more than $70,000 per day for their globe trotting adventures.

We can't even keep our traffic signals properly functioning and this bozo wants to continue with all of these overly-sophisticated, complex and useless technology suveillance systems. Get real !!

Munroe is proving himself to be a buffoon of the highest order with absolutely no common sense.

The unscrupulous foreigners selling all of this useless rubbish to us at ridiculously inflated prices are laughing all the way to the bank and we have every reason to suspect some of their good fortune has worked its way back to certain of our senior government officials, both past and present.

Psst. . .I think we are being treated just like the Indians were treated. . .the white man bought their expensive good for glass beads, old pots and pans and their "trow aways". . .I am of the notion that some er we "get fixed up" like the Indians. . .flashed the bright lights before our eyes. . .gee them plenty money. . .we gat "flashing lights them nah". . .only thing the rest of the world are now using blinking lights!! Up into the corner goes them "new brand" flashing lights we just bought!! Next ya hear them in the news talking about "we need some blinkin" lights like errybody them usin nah!!

I like what Ive seen so far from Mr Munroe. he's hinted at both prison and police real reform. And now he's find this stuff that's still under contract and is usable and he's said he intends to use it What Id suggest to him is to take about 10 of the bands and do a test. Do all the Im going to bypass the system tests that you can before they're required .

I guess he more than anyone knows about legality. I suspect public health laws would give the state the right to limit someone's movements