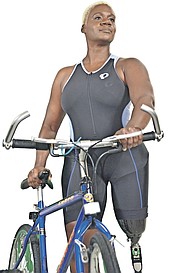 ON November 13, hundreds, or as many as a few thousand people, will watch as a Bahamian woman is named godmother of a ship at a dockside ceremony in Port Everglades, Florida. Among those with cameras flashing and pens poised will be 150 members of international media. Their eyes will be on a 41-year-old mother of two, a woman named Erin “Bionic “ Brown.

Brown might not have been chosen for one of the highest honours in the global maritime arena had it not been for cancer or, rather, what she did after she was diagnosed. Her story starts with what set the stage for how she looked her condition square in the eye and said “You may have taken my leg, but you will never steal my life.”

The only daughter of the late Senator Edwin Brown, Erin was 13 when her mother, Tangy, was diagnosed with Lupus (SLE) linked to cancer. She watched her mom’s valiant battle that lasted an agonizing five years before the disease won. Erin left her native Grand Bahama to finish high school in New Providence and went off to college where her life regained momentum. She was a star volleyball and track and field athlete. Then one day, she had a fall. Months later, even after rehabilitation, she had another. Her leg was failing her. Something was going wrong, it made no sense. That is, until the diagnosis came back – Erin had a rare form of bone cancer called Osteosarcoma that had already reached Stage 4. The year was 2004. Erin was 23 and president of her student body as well as a strong athlete with a promising future.

Having watched her mother fight the disease with such courage, Erin was determined to do so herself. A year of hell followed with rounds of chemo leaving her nauseous. Her hair fell out. Her gums turned black. By 2005, at age 24 and with a young son, she knew what the doctors said would change her life forever. She also knew she had no choice. She agreed to amputate above the knee leaving one remaining leg and one residual stump.

Erin could have been just another amputee crying, why me? And for a while she was lost. No one is perfect. Then she got hold of herself and said for the sake of her son, decided she would go on and be better than she had ever been. She would fight for her life and to show others that they, too, could do things they never realized they could until they tried. She started cycling, then with a prosthesis, power walking and running. She finished with her adaptive team members; the first for Ride for Hope in Eleuthera, 100 miles on a bike up and down the island’s hilly terrain, in tears and to applause from onlookers. She started swimming, completing her the first UWC Triathlon and with every finish line she crossed, she hoped there were others looking on who would say to themselves, ‘If she can do it, so can I.”

Erin has gone on to fight for inclusion and rights for those with disabilities. She has a consulting company in Nassau and a full-time job at the University of The Bahamas where she is the sole overseer of rights for the disabled. She has also found love and the new man in her life is the only father her 6-year-old daughter knows and loves, too. Son Aaron, now grown, is a basketball star in his high school in Kentucky. He will be there with the rest of Erin’s family among those thousands watching as the bionic, can-do woman from Grand Bahama is named godmother of Royal Caribbean’s new Quantum Ultra class ship Odyssey of the Seas next Saturday in Port Everglades. It will be her task to bless the ship and send it on its way, wishing safe passage for guests and crew and good wishes for the communities it visits. Erin’s story deserves to be shared. Now it will be carried silently across the many miles of ocean that Odyssey of the Seas will cross and the decades the ship will sail.

For the past few weeks, this car has been parked on the lot across from Montagu Park with the front end of the vehicle south, just before the intersection of Shirley Street and Village Road. Assuming that someone from the Free Town constituency office or the Royal Bahamas Police Force has spotted the car with the dangling license plate and checked it out and there are no dead bodies, can someone please explain if it is just another abandoned vehicle or a makeshift home for an otherwise homeless person who sometimes dries laundry on the hood.

Funny how you can pass by something that shouldn’t be where it is and become blind to it after you see it enough times.

By the way, there is growing concern on the part of at least one loyal reader about the worsening conditions and abuse of the same land. The gentleman with a keen eye is frustrated at trucks parking all over the grass, leaving trailers for the day. I believe we need to provide truck and trailer parking for recreational boaters, though those fishing commercially should be able to pay a nominal annual fee for parking the vehicles they tow their boats with. Some of us worked so hard to restore Montagu Park and make a better, cleaner, safer space for fish vendors as well as creating more parking and enjoying for swimmers, walkers and others enjoying Montagu, it seems a shame that the area has begun to deteriorate. First up – replacing the “snow” barriers that help keep sand in place when the wind picks up.

Last Saturday, my husband and I were sent on a shopping mission. Find two identical large clay-based pots that make a strong statement for the outside entry point of a high-end home décor store. We trod and traipsed at all the usual suspect places, saving our regular go-to for last, and sure enough after sifting through the short supply they had, we finally negotiated, settled for one with a chip that could be fixed with a little work and another that was like it was supposed to be when new. The vast yard was nearly empty.

It was another jolting example of a shortage in the supply chain. Worse yet, the place with more empty spaces than filled and where we eventually were happy to settle for something, anything, was not going to order any more of the large pots because shipping costs had tripled since last year’s order. We know the feeling. In both retail and manufacturing, costs have skyrocketed so dramatically that businesses are reviewing the business plan on which they were founded.

It is only a matter of time until the cost of supplies, the delays in shipping and the final cost of landed goods landed impacts the construction industry. And see what happens then when the much-desired shovels in the ground are even hard to find on the shelves.