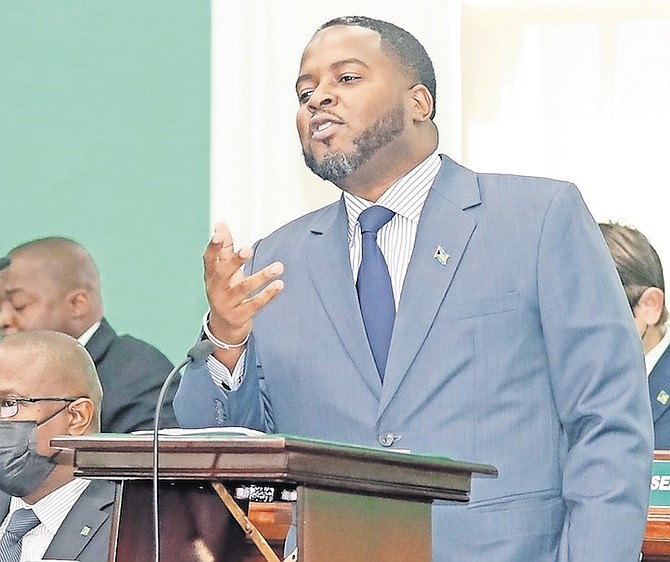 Mr Gibson said he was slighted by Dr Darville who was accompanied on the trip by Tyrel Young, the Progressive Liberal Party candidate for Long Island in the recent general election.

Dr Darville and the members of the ministry’s COVID-19 technical team recently visited islands in the southern and central Bahamas to conduct an urgent assessment of the situation there.

Mr Gibson said the opportunity provided by the minister should have been for himself, the sitting MP for Long Island.

“I believe in respect,” Mr Gibson said in the House of Assembly last week. “Though we might be on different sides politically, no member from the opposite side could say that I went to their constituency without giving them the courtesy of informing them and/or even inviting them.

“So, I wondered... who is paying for this? Are taxpayers being made to pay for a political poke in the eye towards the sitting MP?

“Subsequent to that trip, I noted that Mr Young has in recent days been appointed to chair the BAMSI board. So, why was he on that trip and why are taxpayers funding it? Was he detecting COVID in some unknown capacity?”

Mr Gibson said he was pleased to hear about investments in Family Island clinics and expressed interest in seeing the IDB funded works undertaken at the clinic in Deadman’s Cay, a settlement in Long Island.

“Notably, we were also promised works – from the Ministry of Health’s capital budget – to the second major clinic, ie the Simms Community Clinic,” he said. “Both clinics have fallen into a state of disrepair. We are desperately in need of consistent medicine supplies and increased nursing staff.

“In conducting renovations to our clinic, we are keen to have telemedicine and lab services put in place so that Long Islanders are not forced to fly to New Providence for medical issues that can be addressed locally and/or for blood tests and other simple lab works. This is how we decentralize healthcare on these islands.”

Mr Gibson updated Parliament on the much talked about Long Island International Airport.

“I have spoken to the member for Exuma about the new Long Island International Airport,” he said. “He has pledged that the airport will be constructed.

“When we left office, both the landside and the airside of the airport had been tendered. I am advised that the tender evaluation had been completed and, given the same, the airport was at the stage for an imminent contract signing.

“I intend to pay a great deal of attention to advocating for this much needed airport.”

Mr Gibson also spoke out about a recent Water and Sewerage Corporation notice about impending disconnections.

At the onset of the pandemic, disconnections at WSC were put on hold because so many consumers were out of work.

As the former executive chairman of WSC, Mr Gibson said a snap disconnection exercise would leave many without water.

In regards to the corporation itself, he said annual audits have all been compiled and that his team had years of audits ready to table on September 22 when they thought Parliament was to resume after the summer break. He said those audits were printed and left at WSC.

Mr: Gibson set your own sail for Long Island. You know how to find your way there. when you are looking for votes.

To my fellow comrade sailing enthusiasts, from the sound it I'm sensing a possible boom, boom brain concussion delivered to the head of but one the Red Party's leadership hopefuls after crossing paths, once too many times from whole lotta mouthing off at sailboat's moving ever more swiftly boom and everything like this and that can happens during 20 hours sailing time out Nassau Town to Clarence Town, Long Island, ― Yes?

Them FNMs are "springing all ova da place". . .wiith no government to get "row out" for messing up!! Them PLPs are "nah tied". . .making the mess!! If it were not for Davis, Hanna-Martin and Pia Rolle. . .so far, the PLP een "catchin they feets dem" yet!! Lol!!