Face To Face: A Helping Hand From A Man I’Ll Never Forget 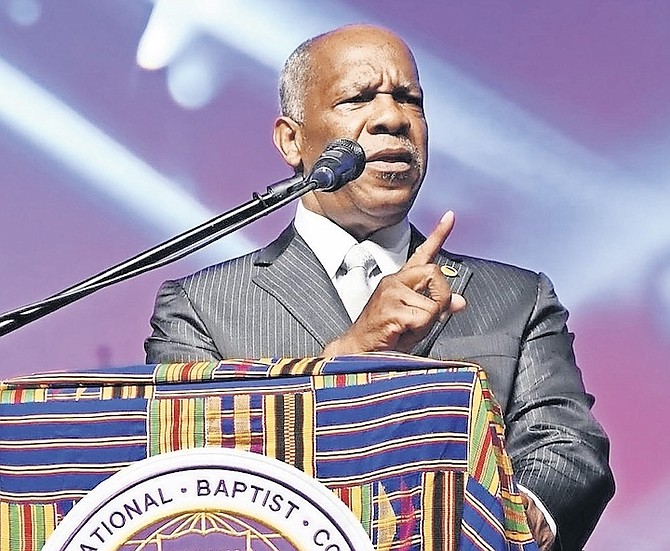 HE was the shepherd of one of the oldest Baptist churches in The Bahamas and longest continuing Baptist church in the Caribbean. He presided over an entire convention of churches across the United States and the region. He was a nation builder and community leader. He was a husband, father, uncle and friend.

He was many things to many people. But to me, he was a stranger. He was a man I did not know, who went out of his way to help me, making such an impression that I never forgot him. He didn’t have an audience to impress. He didn’t have the judging eyes of those who expect so much. With nothing to prove, Reverend Dr Timothy Stewart demonstrated every virtue a spiritual leader should have. I only recall meeting him once, but in that time, he proved that he didn’t just talk, but he walked his Christian faith.

On October 1, 2021, a state-recognised funeral was held for Reverend Dr Timothy Stewart: Pastor of the Historic Bethel Baptist Church; 21st President of the Progressive National Baptist Convention Inc, USA; former Chaplain of the Honourable House of Assembly; and Moderator Emeritus, Bethel Baptist Association. Officiated by Rev Dr Ivan F Butler and Rev Dr Reuben Cooper, Jr, the funeral brought together many of the nation’s leading pastors, politicians and dignitaries, who praised Rev Stewart for his exemplary service to his God and people. Tributes came from near and far. My testimony of him was not one grand enough to be told from a podium. But it is important enough to declare in this space.

When I came face to face with Rev Stewart, it was nearly 20 years ago. I was walking along Meeting Street with three small children. I was walking on the southern side of the road with the intention of stopping under the big silk cotton tree by St John’s Native Baptist Church where my great grandmother Blanche Hanna Thurston is buried. I didn’t make it there that day. Although it was sunny and the skies were clear, it started to rain very lightly.

I didn’t know if the rain might come down harder, but I didn’t want the children getting wet at all. I noticed a man across the street who appeared to be the pastor coming out of Bethel Baptist Church and getting into his car. I said ‘Lord, what am I going to do?’ The man pulled right up alongside us and offered us a ride. My children and I got into the backseat. Long story short, we enjoyed a light, hearty conversation. He took us to our destination and when we arrived, it wasn’t raining anymore. As we were coming out of the car, he gave me a $100 bill, and said I should buy lunch for the children. He had no idea the money was needed. God supplied my need that day through Rev Stewart because he walked in the Spirit.

He did not judge me based on my appearance. He could tell I was Rastafari at the time, with my long dress, irie colours, and long dreadlocks tied in a scarf… and three children with locks. He did not open a religious debate with me or try to win me over to his beliefs. He looked past the flesh into the soul. By doing that, we surpassed any divide the physical world could create, and simply spoke in genuine love. We spoke about life, country, and the blessing of having children. He has a son named Gardner who is in set with my children. I ended up meeting Gardner in recent times. He is a genuinely nice young man, displaying good moral character, just like his father.

Meeting Rev Stewart was a once in a lifetime experience – literally and figuratively. Although I did not see him again, I never forgot his genuine kindness and generosity. His prayers to God for wisdom, discernment, compassion and a Christ-like nature were sewn into good soil, and bore good fruit. This encounter should be mirrored throughout the world anywhere those who say they profess to walk in the footsteps of Christ exist.

Prime Minister Philip Brave Davis called him a “giant in the international religious community, a consequential national leader, a community leader and builder and a supporter of the progressive movement.”

“Rev Stewart provided a global platform for the collective voices of The Bahamas and the Caribbean to be heard on not only religious matters, but secular issues affecting the developing world,” PM Davis said.

“He is noted and widely celebrated for his civic and humanitarian work in over-the-hill communities, especially the iconic community of Bain Town and Grant’s Town. His passing brings to an end an important era in servant leadership.”

Rev Stewart served as Pastor of Bethel Baptist Church for nearly 39 years. It was 229 years ago that freed slave Prince Williams, Sharper Morris and Sambo Scriven became the architects for what is now Bethel Baptist Church. They purchased lots 20 and 21 in Delancy Town, Nassau and erected a wooden chapel which they called “Bethel Meeting House.” Prince Williams, who is listed on the deed as the carpenter, served as the pastor of Bethel Baptist Church for 44 years. In 1833, Prince Williams departed from Bethel and established St Johns Native Baptist Society, and Sharper Morris then became pastor of the Bethel Baptist Church. Fast forward to November 3, 1982, Rev Stewart was elected as Pastor at the tender age of 26. He was 21-years-old when he was ordained at Mt Zion Baptist Church. He received a Bachelor’s degree from the American Baptist Theological Seminary and attended Southern Baptist Theological Seminary in Louisville, Kentucky. Later in life, the Eastern Theological seminary conferred on him the Master of Divinity and the Doctor of Humane Letters in Lynchburg, Virginia. 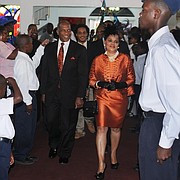 Bishop Neil Ellis of Mt Tabor Church called Rev Stewart “a powerful and prolific prophet, pastor, preacher, a mighty man of valor and one of this nation’s finest sons.” Georgia State Senator Reverend Raphael Warnock said that Rev Stewart “leaves a legacy of prophetic activism and a model for civic and community engagement that will inspire so many others for years to come.” Congresswoman Sheila Jackson Lee also sent her condolences to the family in a letter from Capitol Hill, where a flag was flown on October 18 in Rev Stewart’s honour.

As President of the Progressive National Baptist Convention (PNBC) Inc, Rev Stewart led thousands of Baptists in an organization founded in 1961. Member churches include those across the United States, in Africa, Europe, Haiti and Cuba. Rev TM Chambers was elected as its first President. Leadership from across the United States joined the Progressive Baptist family and spawned the Progressive National Baptist Movement. Issues of freedom, civil and human rights, and progressive ideas became the cornerstone for the convention. The PNBC became a new Christian movement which included an array of social and political concerns embodied in its founding principles of “Fellowship, Progress, Service and Peace.” The PNBC movement supported Dr Martin Luther King, Jr’s struggle for freedom for African Americans. It was the PNBC that provided a denominational home for him and many of the Baptist leaders in the Civil Rights Movement.

Rev Al Sharpton of the National Action Network pointed out that even before Rev Stewart was the International President, he helped “keep the organization in the tradition of Dr Martin Luther King, Jr, of Dr Gardner Taylor and of Dr Wyatt Tee Walker.”

“Dr. Stewart was not one to covet the limelight,” said Rev Sharpton.

“He found solace in lighting the path of others to progress responsible and prophetic ministry. Most importantly, he took seriously his calling, while steering clear from profiteering.”

PNBC General Secretary, Dr A Wayne Johnson made a special presentation to his wife, Sharon Stewart, and sons Timothy, Henry and Gardner during a memorial service at First Baptist Church Highland Park, Maryland, where he gave them the flag flown at Capitol Hill in Rev Stewart’s honour.

There, lady Stewart said that 10,000 tongues could never express how much he meant to them: “You were always the priest of our home and we loved and respected you. You taught us how to be Godfearing, kind and loving. We were a strong team. You embraced your nieces and nephews like your own sons and daughters. Everybody knows that Gandhi was your celebrity niece. You were the patriarch of our family. A true leader and shepherd, you extended your love to (your church family) and they became a part of us too.”

Rev Dr Timothy Stewart was born on October 30, 1956 to Reverends Henry and Lavinia Stewart in Nassau. He was the ninth child of 11. His father served as pastor of the Salem Mission Baptist Church in Kemp Road with his mother at his side as a faithful partner in ministry. Young Timothy was nurtured in the Christian faith, both at home and in church, and professed his hope in Christ at a tender age.

In the latter years of his pastorate, Rev Stewart emphasized the theme, “In Pursuit of Wholeness,” with a special focus on “The Promotion of Unity” in 2021. He passed away on September 17 leaving behind a legacy in the world that won’t be forgotten. May he rest in peace and rise in glory.