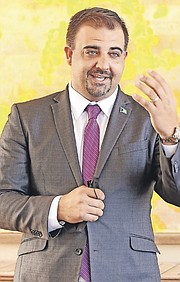 AGAINST a backdrop of blue sky and perfectly manicured greens at the Ocean Club Golf Course, two Cabinet ministers, the CEO of ALIV and community leaders today threw their support behind a golf tournament aimed at raising $100,000 to help fund BAARK’s efforts to slow the stray pet population through spaying and neutering.

Agriculture and Marine Resources Minister Clay Sweeting and Minister of Youth, Sports and Culture Mario Bowleg were on hand for a press conference at the golf course along with tournament chairman Mario Carey, title sponsor ALIV, representatives from BAARK (Bahamas Alliance for Animal Rights and Kindness), and tourney organizers. 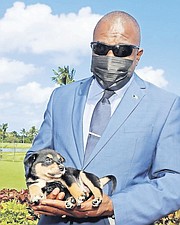 MINISTER of Youth, Sports and Culture Mario Bowleg holds a puppy at a press conference on Monday at the Ocean Club Golf Course to announce the first Annual Potcake Golf Tournament - which will assist BAARK (Bahamas Alliance for Animal Rights and Kindness) with executing their spay/neutering programme.

Funds from the Potcake tourney will go toward BAARK’s operational costs for a mobile unit including veterinary staff, supplies and ongoing outreach efforts.

“I am proud to learn that BAARK will be going into the communities where they’ll be able to operate five days a week, performing as many as 5,000 spay and neutering surgeries a year,” said Sports Minister Bowleg. “You have my full support and I encourage business owners, all golf lovers and supporters to be part of this inaugural event.”

“My constituents in Eleuthera are very grateful to BAARK for the work that they are doing through spaying and neutering in various settlements. BAARK is scheduled to continue its work in December and the community looks forward to their arrival,” said Sweeting.

Tournament organizer Mario Carey admitted the goal of $100,000 was ambitious for an inaugural event but called the work of BAARK “tireless and important to protect and control the dog and cat population.”

For title sponsor ALIV, the tourney with an island heritage competition is a match for its mission of connecting communities.

“ALIV is excited to partner with Baark for the inaugural tournament because it will have a long-lasting impact on animals in our community,” said John Gomez, ALIV CEO.

“As ALIV is a 100 percent Bahamian-owned company, we’re particularly proud of the theme ‘Represent Your Heritage.’ Our five-year anniversary, is later this month and we’re reflecting on our history and community ties— so this event feels like a full circle moment for us. We’re looking forward to having other companies that compete in the tournament because it’s fun to flex your golf skills, while contributing to a worthy cause.”

Along with Carey, tournament organizers include Louisa Holowesko, Mark Carter and Rachel Hale. Organizers say the Potcake tournament has attracted “super prizes,” including a seven-day Caribbean cruise for two donated by Royal Caribbean.

Other prizes include four day, three night stay for two at Comfort Suites; golf and lunch for four at Albany, two-night stay at SuperClub Breezes, two-night stay at Sky Beach, Eleuthera, dinner for two at Sapodilla, return flight from Fort Lauderdale for two on Tropic Ocean Airways, custom label cigars from Graycliff, golf for four at Ocean Club, four-round trip tickets to Harbour Island on Bahamas Ferries, three golf lessons with Atlantis golf pro Mike Simms, two Daniel Wellington watches from John Bull, round of golf at Baha Mar, round of golf for four at Lyford Cay, a beach day for four at Dolphin Encounters and a three day, two night stay at a ranch in Ocala, Florida.