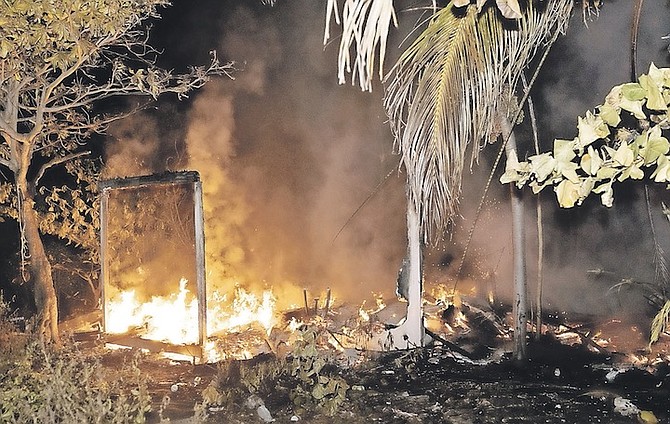 THREE families are believed to have lived in the building destroyed in the fire. Photos: Racardo Thomas/Tribune staff

SEVERAL families have been displaced after a structural fire in a Haitian community just off the Kool Acres Subdivision last night.

Police responded to the fire around 7.49pm yesterday.

“While on scene they met a multi-structural wooden house engulfed in flames,” ASP Peters said. “The fire delta unit extinguished the fire and did a search of the structure and apparently at this moment there seems to be no life lost.

Asked if the blaze was the result of an electrical fire, ASP Peters said: “No, we’re not able to determine how the fire started. Investigations are ongoing in this matter.”

Resident Tiffany Reubins told The Tribune she was at a shop with her daughter and was going home when she saw the neighbour’s house on fire.

“When I saw the neighbour’s house on fire I decided to grab at least two baskets… I grabbed two baskets and that was the only thing I was able to save . . . Everything was on fire and I have asthma so I couldn’t even try to say go in smoke and save anything else,” the mother explained.

The 22-year-old and her daughter lost “literally almost everything” in the blaze.

I am sorry they lost their homes it can not be easy. but I am happy there was no loss of life.