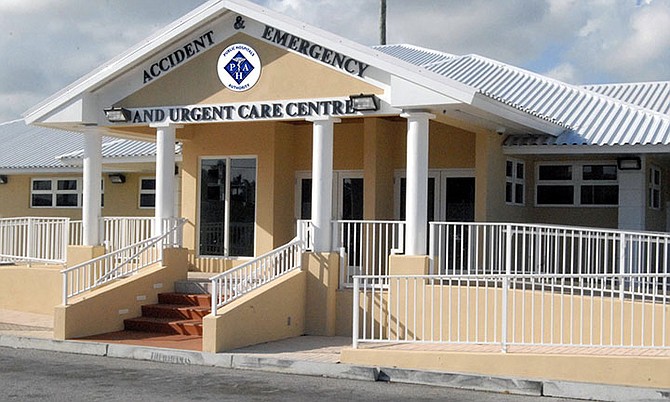 A concerned resident has expressed frustration over the long wait time and delays at the Rand Memorial Hospital before patients are seen by a doctor.

The delays are so long in a video post on social media, a Grand Bahama woman claimed she and others had to assist a pregnant woman who gave birth to a baby after waiting outside to be seen by a doctor.

“It made me cry to know where that baby born in the middle of the floor,” the woman claimed in a video posted on facebook.

According to the woman, the pregnant woman and other patients were made to wait outside the hospital.

The woman said she took her mother who experiencing breathing complications to the Rand around 7pm.

Her mother was screened and told to wait in the vehicle.

The woman said someone came out with a wheel chair and wheeled her mother to the front door, but did not take her inside.

She said she was told the doctors were busy.

“His finger was hanging off and they…wrap couple pieces of gauze around it and say they dealing with a baby first,” she said.

The woman claimed a pregnant woman in labour also came to the hospital.

She said the woman appeared to be in a lot of pain.

She said she sanitized her hand and started to comfort the woman by rubbing her down and fanning her because she was sweating.

“We were sitting outside and we were cold, but she was sweating,” the woman recalled. Me and a next lady we timed the contractions. She said, ‘the baby coming’ and I said, ‘don’t push.’ “

“Me and two ladies had to throw our hands around her and the baby was out. We helped deliver the baby right there in the middle of the hallway,” the woman claimed.

“They have to do better with this system.

“We have babies sitting up out here in the cold.

“We were sitting outside because there is no place to sit.

“When they screen you, you have to sit outside. If it is rain… you getting wet - this ain’t a place for nobody to be.

“That lady deliver her baby walking inside the Emergency Room door. We had to grab the blanket and throw her sweater around her.

“And it is hurtful.”

The woman claimed hospital personnel came running to assist only after the woman had already given birth.

“The baby was in the woman pants crying, she said.

“I am so angry right now, but I am happy because it is a healthy baby girl.”

The woman called for improvement in hospital.

The Tribune understands that hospital officials were aware of the video post. However, the hospital administrator did not return our call up to press time.

... it is amazing, people don't want to pay for healthcare to improve the standards and quality of care, but expect miracles with limited resources during a pandemic. This is obviously a rare occurrence, which doesn't justify it, but some people still give birth at home!

Maybe she was lucky. No hospital might mean no Covid for her and child. Back in Austria almost 200 years ago, women died because doctors would not was their hands, women started guvibg birth on the side of the road. From Wikipedia:

Despite various publications of results where hand washing reduced mortality to below 1%, Semmelweis's observations conflicted with the established scientific and medical opinions of the time and his ideas were rejected by the medical community. He could offer no acceptable scientific explanation for his findings, and some doctors were offended at the suggestion that they should wash their hands and mocked him for it. In 1865, the increasingly outspoken Semmelweis supposedly suffered a nervous breakdown and was committed to an asylum by his colleagues. In the asylum he was beaten by the guards. He died 14 days later from a gangrenous wound on his right hand that may have been caused by the beating. Semmelweis's practice earned widespread acceptance only years after his death, when Louis Pasteur confirmed the germ theory, and Joseph Lister, acting on the French microbiologist's research, practised and operated using hygienic methods, with great success