Concerns over guns after daylight shooting on Bimini

THE brazen daylight shooting of a man on Bimini has sparked serious concerns over the proliferation of guns now being seen in the Family Islands.

A video of the incident circulated on social media and WhatsApp yesterday.

Prime Minister Philip “Brave” Davis, Minister of Social Services and Urban Development Obie Wilchcombe, along with Health and Wellness Minister Dr Michael Darville were in Bimini when the incident occurred.

Dr Darville, who is a physician, was able to assist the victim, who sustained serious gunshot injuries and was airlifted to New Providence for further medical treatment.

According to police, the incident occurred around 9am yesterday in Bailey Town.

Assistant Superintendent of Police Stephen Rolle reported that officers at the Alice Town Police Station received information about a shooting. He said initial investigations revealed that two men were involved in a physical argument, which resulted in one of the men being shot about the body.

ASP Rolle said the victim was taken to the Bimini Government Clinic in serious condition and later transported to New Providence for further medical attention.

He said investigations are continuing into the matter.

A video of the shooting shows two men fighting in the street. One man was seen pointing and firing a gun at the other. Several shots rang out and the victim could be seen running away. The gunman was also seen chasing and shooting at the victim who was injured and bleeding. 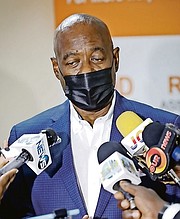 When asked by reporters why the victim was taken on the back of a truck and not in an ambulance to the clinic, Mr Wilchcombe said the ambulance was out of order.

“There is an ambulance here, but what I discovered today is that it was not working… it would not start,” he said.

“We need to have a better plan of renewing and the plan must be where we change vehicles every two years. I thank God… that the Minister of Health was here and he was able to administer help to the young man.

“And it is a most interesting thing because he came here to administer the vaccines. But, in fact, he was on the scene and saw the man and was able to discover that something was wrong and administered help. I thank God for him, and I think God might have sent him here to save the man’s life.”

Mr Wilchcombe, the MP for West Grand Bahama and Bimini, expressed concern about the guns on the street, and gun violence in the country.

“I am wounded by it and severely disappointed,” he said of the shooting. “The reality is that we have to take guns off our streets. I think that the proliferation of guns in the capital and also in the second city, is now moving to the islands.

“And the incident this morning, obviously, we feel very badly about the injury to the young man. But the truth is we have a bigger problem. The bigger problem is that we don’t have to have guns on our streets.”

He stressed that there are too many weapons being smuggled into the country.

“We have to do more to protect our borders. It is all well and good to talk about protecting our borders against illegal immigration, but I would prefer us to have an equally strong campaign about keeping weapons off our streets and out of the hands of individuals who are responsible and causing for what happened today.”

He also said: “What we must do now is… ensure that we get guns off our streets.”

When asked how he felt about the video, the MP believes that it speaks to the inability of persons to resolve conflicts without violence.

“Why can’t we resolve issues without having to develop to what we saw this morning? My ministry is certainly looking at gender violence, and looking at a number of issues we believe have been talked about over the years, but very little done.

“So, I intend to at the next meeting in Parliament when we discuss the budget to speak about those issues and the initiatives being taken by my ministry. It is imperative that we do something about it. We don’t want to find ourselves another year and going through the same thing. But something we should be starting immediately is public relations and more advertisements, and getting the message across because we believe it is important that we display common decency and respect for our fellowmen.”

Mr Wilchcombe indicated that he knows the individual involved and is very hurt by what had taken place on Bimini.

“I do know everyone in my constituency. I’ve either seen or spoken with them. Because of the campaign, you know the names and you have to reach out to everyone.

“That is why I am so wounded by it, these are my people.

“And whether they voted for me or not, it does not matter, these are all my people and when one hurt, we all hurt. And I am hurt by it, and feel very badly that it happened and what caused it to happen.”

The MP said that a gun is the weapon of people who lack courage.

“But that weapon is giving people unnecessary power and it is giving the weak person power and they utilise it the wrong way.

“And so, today, yes, the people of Bimini would be hurt by it, and so am I, and I feel very badly it has happened and pray to God for his life,” he said.