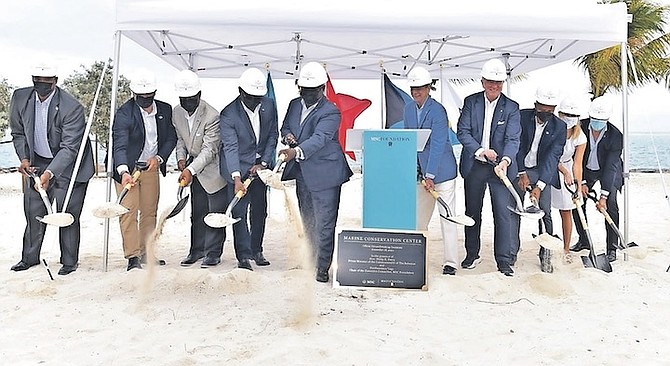 His comments on Ocean Cay yesterday came during a groundbreaking ceremony for MSC’s new Conservation Center. 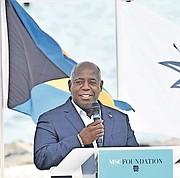 The centre aims to regenerate ocean health and educate visitors about marine life.

The centre will open next spring to researchers and guests.

Through the work of the centre, officials hope to reverse the decline in corals around the world as global temperatures rise, among other things.

“Your multi-pronged focus on coral preservation and growth, combined with your facilitation of academic research and public education, are exactly the kinds of initiatives that we wish to prioritise as part of our New Day Agenda,” Mr Davis said.

“The mere fact of travelling here, and the fact of being here on a land mass the size of Ocean Cay, heightens awareness of the fact that our country is an ocean state.

“Although we have only been in office for eight weeks, my Administration has made clear its commitment to developing the ‘Blue Economy’, a term of art as well as science, that speaks not only to the potential economic benefits which may be derived from our seas, but also support for the many ecosystems on which our lives and livelihoods so crucially depend.

“At the recent UN Summit on Climate Change in Glasgow, COP 26, I highlighted the fragility and vulnerability of The Bahamas to the impacts of climate change.

“We know full well that carbon emissions are the main driver behind the rise in global temperatures, which in turn produce the increase in hurricanes, the rise in sea levels, and the flooding, fires and devastation that we have seen worldwide.

“But in respect of the coral reefs which are the main focus this Conservation Centre, we know that other factors are also at play.

“As you drive this venture forward to what will hopefully be a very successful future, I encourage you to also keep those other causes in sight.

“We can prevent damage and degradation in the ways that we navigate shipping lanes.

“We can observe strict adherence to regulations concerning waste and pollution.

“And we can do whatever we possibly can to avoid damaging the seabed and those prized coral reefs every time we lay anchor in our beautiful, aquamarine waters.

“Let us see conservation as acts of prevention, not just as efforts to mitigate and repair once the damage has been done.”

We would be better to have responsible development of the Out Islands for tourism rather than a proliferation of cruises. They do not give us the same revenue as land stays. All the potential damage to our crucial environment will increase with more and more cruise ships. The average Bahamian does not benefit from cruise ships.

Trying to make a deal with the cruise lines is like taking hold of a rattlesnake and placing it next to your heart.

These cruise lines already feel that they own us, and we have given away our precious cays to them at bargain prices PLUS the NP cruise port.