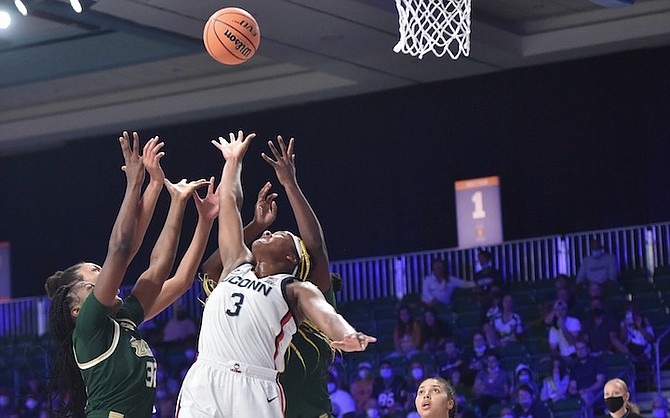 The inaugural Bad Boy Mowers’ Battle 4 Atlantis Women’s Tournament will conclude with an epic matchup between the top two teams in all of college basketball.

The No.1 ranked South Carolina Gamecocks will face the No.2 UConn Huskies in today’s championship game at the Atlantis resort’s Imperial Arena.

Tipoff is at noon and the game will be broadcast live on ESPN. It is the second consecutive year that the two storied programmed will face off in a No.1 versus No. 2 matchup. The Huskies won last year’s game in overtime.

Both teams had to emerge from hard-fought games against ranked opponents in yesterday’s semifinals. 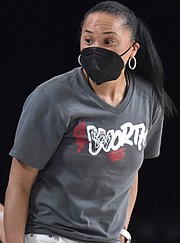 The Gamecocks pulled away late and advanced with an 80-63 win over the No. 9 Oregon Ducks.

“We’re excited. We chose to play in this tournament because we got an opportunity to play top teams in the country,’’ said South Carolina head coach Dawn Staley. “That’s been our theme all season long, so why not? UConn has always been on our schedule the last couple years and still are on our schedule. It’s great for women’s basketball.’’

Staley was named the Naismith, United States Basketball Writers Association, Associated Press, and Women’s Basketball Coaches Association Coach of the Year in 2020. She led the Gamecocks to a Final Four last season.

Second leading scorer Zia Cooke, who scored 20 in the semifinal, said she relishes the challenge that the Huskies are expected to provide. “I love when we play good teams early so we can get tested early,’’ Cooke said. “I think it will be a pretty good game.’’

The Huskies advanced to today’s final with a 60-53 win over the No. 23 South Florida Bulls.

Huskies legendary Hall of Fame coach Geno Auriemma said for his team to continue its development as a unit, he continues to encourage his young underclass women to accept a larger role.

“I think being a great teammate is shooting every time you’re open when you’re a great shooter,” Auriemma said.

“For young kids, I think it’s somewhat natural at times to not want to put yourself in that situation. Some kids just take a little bit longer to kind of see it. It’s not a bad thing, it’s what it is.”

Fudd added: “Coach has been telling me to shoot and every game so far I’ve been overthinking,” Fudd said. “... And when I got the ball and my defender’s hands weren’t there, to just shoot.”

The Huskies opened the tournament with an 88-58 win over the Minnesota Golden Gophers.

The Gamecoks opened their run in the tournament with an 88-60 win over the Buffalo Braves.

Oregon will face USF in the third place game, scheduled to be broadcasted at 2:30pm on ESPNU.