Insight: It’S Past Time For Just Talking About Domestic Abuse 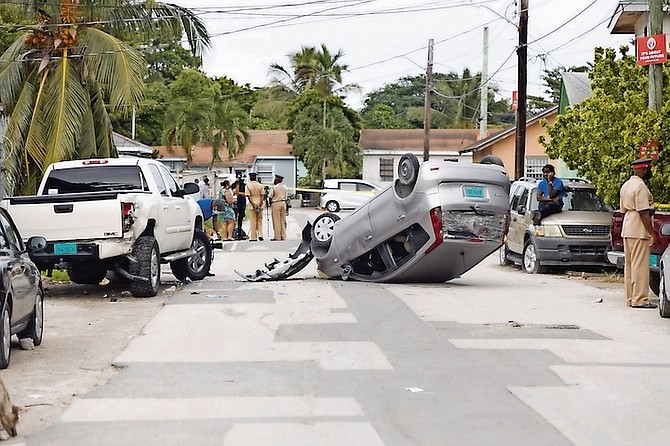 THE SCENE of the incident on Key West Street.

THEY say a week is a long time in politics – and Prime Minister Philip “Brave” Davis has just seen that at first hand.

When he effectively shrugged off the issue of marital rape, saying “I have too many other things on my agenda to be thinking about”, it sparked an outcry that led to him taking a small further step forward. He took to Twitter where he declared that “marital rape is wrong” – it’s sad to say that this most obvious thing of all is a step forward, but it is. He went on to say: “We remain one of the few countries where that is not recognised in the law. An effort to change the law should be part of a larger national conversation and consensus. I very much support having that national conversation.”

So a conversation, without a timeline or a direction, was his solution.

Within a week, the broader picture of the scale of domestic violence in The Bahamas played out in the streets, with a video circulating of a man dragging and beating a woman before running her over with his car.

Transport and Housing Minister Jobeth Coleby Davis also commented on Twitter, saying: “I just saw the video! What is going on? I am completely outraged! This type of treatment must be condemned by all. Women, men, boys and girls, we must join our voices in the fight against domestic violence. So blatant, my goodness.”

Police Commissioner Paul Rolle also took to Twitter, saying: “No more tolerance for the abuse that existed for years unchecked. Truth is, many of us are products of rape. We need change now! Rape is not statute barred.” He ended the tweet with an image of a green parrot and the words “deal with it” in an animated image.

However, when The Tribune asked if there was an increase in certain sexual offences, the Commissioner said he didn’t have those figures and was “simply voicing my opinion on the public debate”. He added: “Whether an increase or decrease is really not the issue. It has to be condemned otherwise it will continue unabated.”

While this latest incident – playing out on video on social media – might be in the spotlight, the issue of domestic violence should hardly come as a surprise. Time and again in the pages of The Tribune, court cases are reported where women are victims of abuse by male partners or former partners, ranging from smashing the windows of their homes or their car to assaulting the women or their new partner.

This is a moment of outrage that is being felt at a perceived lack of interest in action followed by a demonstration of why action is so clearly needed. The question is, will our leaders respond to this outrage with more than tweets? What happens after those tweets? What will Mr Davis do to further the national conversation? Will Commissioner Rolle treat the issue with enough importance that he actually finds those figures rather than just fire off a tweet and move on?

At least those speaking about the issue now are taking it more seriously – rather than when then Speaker of the House Halson Moultrie said that spiritually a husband cannot rape his wife, or when former Social Services Minister Lanisha Rolle declared marital rape was a private issue. Her successor, Frankie Campbell, also declared that more discussion was needed, just as Prime Minister Davis does now. So, where is the discussion?

In 2017, the UN’s special rapporteur on violence against women, Dubravka Šimonović, said marital rape was the most pressing gender-based issue facing The Bahamas. She said the legality of marital rape was “a sign that something is deeply wrong”.

She was right – and not one thing has happened since she said that to change matters.

This is a subject with deep roots – remember when then DNA leader Branville McCartney said that he didn’t think marital rape should be illegal and the outrage that followed in 2012? His response at the time was to open a discussion with women’s rights groups and religious leaders. More discussion, and nothing happening.

Few of those women will have faith in any kind of swift action.

To show how slowly our country moves in taking such action, we need only look to the image of Mr Munroe alongside Ann Marie Davis, wife of Prime Minister Davis, holding up phones to show a successful test of the MARCO alert system last week. Mrs Davis said: “I’ve been waiting for this for a long time. I think maybe seven or eight years, ever since young Marco Archer was found brutalised and killed.”

It was on September 23, 2011, that 11-year-old Marco Archer went missing and was found dead days later in bushes. That’s more than ten years and we’ve only gotten as far as a successful test on a cellphone.

The people being hurt and abused now do not have ten years to wait. If there is a national conversation to be had, it’s past time it started.

Hanging has not stopped murder so just what miracle one cut solution could be proposed? Why is marritial rape clamoring? The high profile global proponents of this sort of justice sees only the results of million dollar divorce settlements. But is that the full depth of our culture? Our institutions have yet to define cultural biases and harms done in totality. Split second anger and well timed provocations with children involved calls for great resources to adjust children's rights as they are abandoned emotionally from a parent. A lit is at stake. It calls for a discussion at all levels. Poking at instances of violence by hollow minded seeking to get their fill of other people's problems and coping mechanisms avoid the challenges of life by staying single with no regard to coping skills in relationships. Mothers with multi baby daddy's pose challenges facing economic realities and shortages of money. The least critics can do is show real DATA from Churvhes, Social Services, Women's Crises Center to find expert opinions. Reporters need to understand social behaviors and risks, female insensitivity, fatherhood whole household challenges, sacrifices and lack of coping mechanisms during the dynamics of decaying martial or relationship dreams. The females of the Bible Narrative and men destroyed has not changed. Salvation is yet to be found among men and women.

... physical abuse, though wrong, is only the tip of the iceberg. More people are mentally and emotionally damaged by verbal abuse. Low self esteem, depression, sexual promiscuity, attention seeking behavior, anger and acting out physically are all evidences of this.

Journalistic ambushes of the PM is a lazy way of failed due research. The church perform Baptism, Marriages and burials. Why are they silently not being questioned on this aspect of humanity? As expected, the press is searching for a rolling story to blame, pin engaging in answers on experts as leadership failure. More marriages and relationships end up separated before violence occurs with many lasting less than a year. In many cases among the aspiring middle class divorce ends up in poverty and worst misery with females doing the single girl shuffle and males committing a slow suicide by alcohol.

Many men find themselves ambushed by professional divorce with all financial gains and losses worked out after beyond prime of life. Spiritual Church Laws tend to wane down by everyday life gains that come with unplanned expenses at growth and decay are dynamic not static. Some females are burdened by financial overreach and shamed by peer pressure so enter the fast lane. When overlapping do eventually occur then terror couldld could ensue. There is no manual when faced by sudden deception of the passions. About one (1) in every thousand men turn to violence and the once that cannot cope are usually dedicated, quiet and friendless. When that brother is silent or changes patterns reach out to him. Most bartenders and barmaid have saved hundreds of lives. The unsung heroes.

The eyes of a man suddenly jilted by a lover is the same as a man shot at at close range. For the jilted for years he just stares and needs lots of support assistance. They tremble and are incoherent. Traumatized harm being done most never regain mental, social, emotional, or physical health.