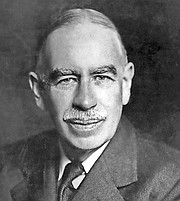 Between the end of World War II and the 1970s, mainstream economics was dominated by the ideas of John Maynard Keynes, a British economist. Keynesian economics, developed in the 1930s as an attempt to understand the mechanics that led to the Great Depression, was a theory that postulated the existence of an inverted correlation between inflation and unemployment. To Keynes, weakness in production would induce a decline in wages and prices, while prosperity and high employment generated rises in prices. According to this theory, whenever unemployment rises, monetary as well as fiscal stimulus should be applied to re-energise the economy without fearing inflation, which would arise only once the recovery was achieved.

But then the 1970s came along and so did stagflation, which can be defined as a period during which slow growth and unemployment co-exist with high inflation. Such a scenario presented a dilemma for economic policymakers, as actions aimed at lowering inflation would be likely to further stifle growth and exacerbate unemployment.

Enter Milton Friedman, an American economist and statistician who gained notoriety for explaining the role of money supply in economic and inflation fluctuations. His research work, focused on the role played by monetary supply in an inflationary environment, eventually won him the Nobel Prize for Economic Science in 1976. Friedman subscribed to the idea of monetarism, a theory that highlighted the importance of monetary policy and how shifts in money supply can have immediate and lasting effects. For Friedman, inflation was always a monetary phenomenon, meaning that to control it central banks must tighten policies through hiking interest rates.

Fast-forwarding to the present, we can see that throughout 2021 consumer prices have been escalating. At first, central banks dismissed the process as transitory, the product of COVID-related supply bottlenecks. However, with time passing and inflation remaining a hot topic, recently reaching the highest level in more than 30 years in the US, that argument is wearing increasingly thin. Many observers suggest that, rather than transitory, the problem is structural and could last for years.

Some even fear the return of stagflation. Supporters of this view have been advocating for immediate rate hikes, arguing that the short-term impact such a shift in monetary policy may have on growth and unemployment is a price worth paying, despite the fact that economies are still recovering from the pandemic’s brutal impact.

However, there is little political appetite for such tightening of money supply and government spending. The austerity of the post-2008 financial crisis generated discontent among large sectors of the population. It may even have created scope for the global wave of populism that followed. If anything, stimulus looks set to grow through gargantuan programmes in the US, Europe and Japan, which may lead to a new form of capitalism - one with a larger state footprint than we got used to over the last decades. This is something Milton Friedman would have disapproved of, but… we are in unchartered waters and, just like Keynes’ ideas revolutionised policymaking in the post-war, a new economic template may be required to map the way forward in the aftermath of the pandemic.