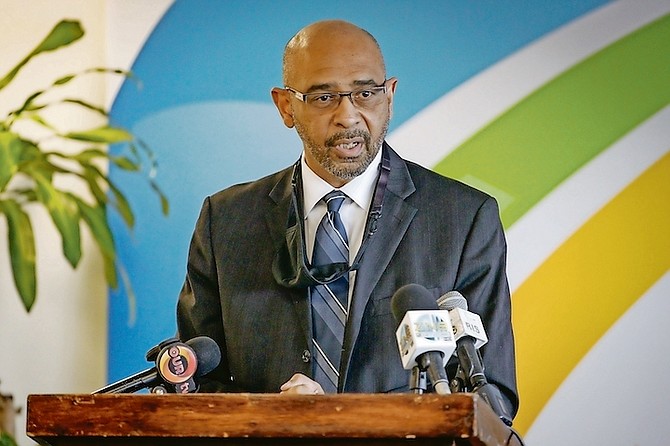 BAHAMAS Power & Light CEO Whitney Heastie revealed yesterday more than $100m in unpaid bills is owed to the company which is in “dire straits financially.”

Mr Heastie stressed that BPL has reverted to its 50 percent policy, meaning when people are disconnected, there is a six-month window to repay the remainder of what is owed.

At the height of the pandemic, the company revised this policy to a repayment plan of 25 percent with a 12-month payment window.

However, Mr Heastie said this policy had made little difference.

His comments came during a press conference yesterday in which Minister of Works and Utilities Alfred Sears unveiled the new BPL board.

“The payment plan was if you were disconnected you had to pay 50 percent of the arrears and then the other 50 percent would have to be paid over six months.”

“The pattern of individuals who were disconnected initially remained the same. It was not long after that they were put back on the grid even with 12 months to pay, they found themselves disconnected again.

“Let me just make it clear, BPL is in dire straits financially and therefore we have reverted to our 50 percent policy. If you are disconnected, you have six months to pay. What we found too is people will pay their cell phone bill because they want data but they really didn’t care about paying the electricity. Sadly, enough that’s the truth. The outstanding receivables for BPL is over $100m.”

During the COVID-19 pandemic, BPL was prohibited from disconnecting electricity supplies for three months. That policy ended in June 2020.

“Since June of last year, once the three-month ban ended, disconnections resumed,” Mr Heastie said. “Typically, it has been anything over $300 but there have been so many customers it has been anyone (in arrears of) over $500 for three months that we have targeted for disconnections.”

BPL is in dire straits because of years of mismanagement. Unpaid bills are simply a result of that mismanagement. Unreliable service, sky high rates and government interference just to mention a few.

@KapunkleUp I agree with your assessment of mismanagement; however, it was and is mismanagement due to ineptitude.

From American Heritage Dictionary inept: 1. Not apt or fitting; inappropriate. 2. a. Displaying a lack of judgment, sense, or reason; foolish: b. Bungling or clumsy; incompetent:

So what does that have to do with people not paying their bills.

It shows a deficit in critical thinking skills, which then affects all areas of BPL including the financial operations.

Need to sell BPL, BTC, Water and sewage, and Bahamasair. none are manged well at all and a drain on the tax payers because of all mentioned above and Government looading the corps with overstaffing for votes.

The only chance of possibly selling those entities is to offer them for $1.00 and assume the debt.

True to form, the very incompetent Whitney Heastie waits until after the September 16 national general election to tell us what he should have long ago spoken up about. Show him the door, and please don't put him on the payroll of another government controlled enterprise or the civil service.

DECADES of management by friends and family that's still going on today,

The "hole" country wants to put $50 on it . Do people in the Bahamas actually pay bills?

Bahamas Power & Light CEO Whitney Heastie, might want to make a quick, quick call up the Guardian's .The Revolution talkie show to place BPL's order with Comrade Leon "Mr. Crypto Williams.
His call to buy up just a couple Crypto Coins and wait for just one of them to raise $1 million dollars - thus say goodbye youse guys entire debt load of BPL and everything else like this and that, "Mr. All Things Crypto," must done be a multi-billionaire off his vast knowledge of BITCOIN from way back since a single coin was trading at mere Fifty Cents, ― Yes?

The problem existed a long time before covid but pandemic panic and policies that effectively cratered our economy and put people and businesses out of work for months has further compounded this situation.

The problems were there when Minnis became PM in May 2017 and got ever so much worse in the ensuing 4+ years. And to think this past September, in the lowest voter turnout national general election in our nation's history, the PLP party led by Davis won most of the seats in parliament and believe they have a mandate from the people. LOL

Like Heastie says, people always have money to pay for their cellphone data, but not their electricity. Difference is, they mainly pay for the data upfront, and not after using it. Maybe it's time to go back to the old school coin operated electricity meters, where you had to pay upfront.

The BPL mgmt team that gets paid like kings should try harder to make BPL more efficient for the small man. And collect the big bucks from the big men

BPL, Bahamasair and Water & Sewage all need to be privatized.

BoB could have been the second most largest and powerful bank in the country. Owned by the people and serving the people according to their needs. Not a profit hungry , foreign institution trying to reap from Bahamians millions and millions in revenue it lost in fines and other expenses for operating in contravention of banking laws, rules and regulations. But NO! The politicians could not keep their grimy claws off BoB! And some were goodies on by others is the banking industry. Persons who had ulterior motives. And many bday ‘get rid of Bahamasair!’ Do you know what the cost of flying to and from The Bahamas will be if Bahamasair was dismantled or disposed of? Bahamasair and BoB and BPL just needs right fixing like the Arawak Port, the airport and the soon to be revamped cruise port. Some private investment and a management structure that prohibits political interference. And ALL these institutions can become cash cows where Bahamians can benefit. They call you a racist when you oppose the attitude that ‘foreign is better.’ But time to prove that ‘Bahamian can be better. And it must be better!’

One of my neighbors was disconnected from the pole three years ago. A few days later his BPL buddies showed up at night and reconnected him and he is still connected this way even to this day. This is not the first time, he been disconnected and reconnected many times during the past 15 years or so the same way. For more than 15 years he hasn’t spent a dime on power. He is running heavy equipment all day including air condition day and night, summer, and winter without paying a dime. And I am sure he's only one of many. Imagine how much money they can collect from him, and others like him. If we know some of these people, I am sure BPL knows also. They are not serious.