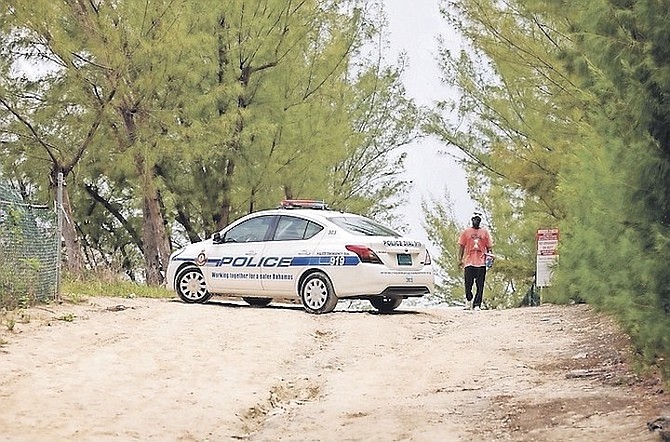 TOURISM, Investments and Aviation Minister Chester Cooper says government is very “close” to resolving concerns relating to Cabbage Beach access, suggesting the matter could be concluded in the “next week or so”.

He said discussions between government officials and relevant stakeholders concerning the beach’s access remained ongoing, but added there were many “teething issues” being addressed by his ministry.

However, he declined to elaborate on exactly what those issues entailed.

Mr Cooper made the comments when asked for an update on the matter before yesterday’s Cabinet meeting.

He said: “Cabbage Beach has been a vexing problem for several administrations and we are continuing discussions with the owners and the neighbours and the businesses in the area as well as the police so this is a complicated issue that’s a vexing problem and our government’s position is that Bahamians have a right to beach access.

“That is our position, and we are working through the teething issues and there are many of them and suffice to say, there is access to the beach through an alternative entry point. That continues to remain open on weekends. Bahamians can access the beach as normal and there’s one particular entrance way that’s a question .. it’s an ongoing issue for the weekend and some problems in the area.

“I don’t want to discuss specific problems in relation to neighbouring businesses, etc, but suffice it to say that we’re working along with the stakeholders to resolve the issue once and for all.”

In June, vendors who operate on Cabbage Beach protested after an access point to the beach was closed.

The group was further angered after discovering their property had been removed from the beach and stacked on the side of the road.

Access Industries, the company that owns the land, said the entry point to the beach was closed for safety purposes while clearing work for a condominium hotel is being done.

At the time, former Minister of Tourism Dionisio D’Aguilar said he was “blindsided” by the move.

Asked yesterday if access to the beach was private or public, the Deputy Prime Minister replied: “I don’t want to comment any further in relation to the access itself. Suffice to say that we are close to resolving the issue and I believe in the course of the next week or so, everyone will be happy.”

In 2016, former Prime Minister Dr Hubert Minnis, who was in opposition at the time, marched with protestors to remove a fence blocking the same access point.

During his last term in office, former Prime Minister Hubert Ingraham had fences erected by private homeowners to cordon off access to beaches torn down.

Mr Ingraham said no Bahamian should be forbidden from going on any beach as no beach in the country was private.

What's even that more perplexing is when yet another governing administration is caving into rights of foreigners over The Colony's Popoulaces Vendors.
Any of youse here listening to the Guardian's talkie host Z Live: Off the Record with Zhivargo Laing, and caller Tobby Smith...is obvious Zhivargo is being so dismissively combatted towards Tobby as a Comrade Brother's running up against Royal's Paradise Island's 150-year land lease, and everything else like this and that why Tobby should just as rudely hang up on the argumentative Zhivargo, ― Yes?

I hear the show. . .Toby just show how dumb he is being!! He seem quite aware that he don't own no land!! What you want people them to do. . .just shut-up when yinna PLP dem talk fool?

Just imagine. . .Mr. Laing could "make an azz" of Toby just by asking a few common sense/logical questions and Toby "came apart" souding like a "slick willie" trynna swing somebody!!