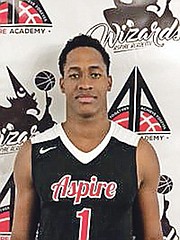 AHMARD Harvey had an opportunity to play an official game on Bahamian soil for the first time since his high school days but remains out of the rotation for the Coastal Carolina Chanticleers at this point in the season.

Harvey received another “Did Not Play - Coach’s Decision” as the Chanticleers opened the Baha Mar Hoops Nassau Championship with a 64-61 win over Valparaiso last night at the Baha Mar Convention Center.

Coastal Carolina improved to 2-1 on the season and advanced to take on the Toledo Rockets in today’s championship game. Tipoff is set for 8pm.

Both semifinals were decided by a total of four points. Toledo advanced with a 68-67 win over Tulane. Toledo opened the competition with a 98-86 win over the Charlotte 49ers while the Chanticleers had a bye in round one.

Coastal Carolina was originally scheduled to open play against Valparaiso on opening night, but changes to the schedule were made after Abilene Christian withdrew.

CCU opened the season with a win over Ferrum but lost to UNC-Wilmington in game two. Harvey has yet to log any minutes early in the season and was slowed by a wrist injury.

He reached double figures twice. He finished with a career high 10 points in his team’s 103-45 win over Greensboro College and tied that with 10 points in a 90-81 win over Troy. Harvey went 5-6 from the field in just 10 minutes.

Harvey, a 6’6”, 210-pound wing player joined the Chanticleers after completing his high school career with the St George’s Jaguars in Grand Bahama and the Aspire Basketball Academy Wizards in Louisville, Kentucky.