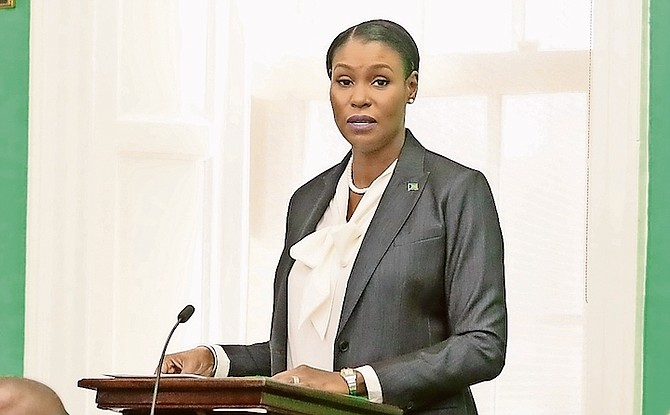 Yesterday, Mrs Glover-Rolle reiterated her concerns about the large numbers of people being paid for work they have not done because her ministry simply has nowhere to place them.

Some, she said, remain unposted because, upon assuming office, the Davis administration placed “an immediate hold” on those hires pending a status review.

Meanwhile, others are not consistently showing up for work among other reasons.

The situation has resulted in a hiring freeze in the public service, which will remain in place until an audit of the service is completed in 2022.

“Since July, 233 people were engaged (by the previous administration),” she told reporters before going to Cabinet yesterday.

Mrs Glover-Rolle conceded that it is unfair to waste the Bahamian taxpayers’ money like this and called on those in the private sector to reach out to her ministry if they’re interested in hiring some of those workers.

She said ministry officials will cross-check skill sets and find those most suitable to meet the needs of the respective employers.

“I think it’s important in responsible governance that there’s accountability and transparency. The taxpayer’s money is being used to fund the salaries of these workers and they’re not providing basically a decent day’s work for the pay that they are receiving.

“So, what I have sought to do, and what I’m seeking to do, is to engage some private sector employers (and) persons who may be interested in engaging our workers who are already on the government’s payroll in some decent work and I know this will fall well with businesses that are now trying to re-open and bounce back from what may have been extended periods of lockdowns or their businesses being shuttered, so, of course, I would extend to the private sector employers that we haven’t already reached out to reach out to the public service to see if we have employees where we can place them based on their skill sets or the needs of your businesses.”

Asked if this means those workers will be disengaged by the Davis administration, Mrs Glover-Rolle said this was not the case.

“No, the programme itself we have always invited private and public to engage the workers so it would mean that they would remain on the payroll but would’ve been engaged in decent work in the private sector. If the taxpayer’s money is being spent, we should ensure that decent work is engaged and that is the critical part of the process.”

According to the minister, the government’s 52-week employment programme is budgeted at some $11m.

Yeah , with minimum wage going up....what are you thinking? You want people to hire more staff, and you also want them to pay more while the government collects business license fees ? Everything is going up in the country including NIB soon . The employer had to pay and bahamians want credit. Wow, what a pickle.

Minister , why dont you start a.business and hire some people. Why dont you encourage more businesses to open, and you and your ministers start one?

Minister, why don't you also publish a list of the job skills possessed by these 88 workers you wish to fob off on the private sector as many of these government hires can't and don't do much more during the course of the day than eat lunch and look at their phone, come late and leave early.

the messenger is absolutely right. Having worked at a government clinic firstly many of the 52 week employees were often related to staff. Secondly some not all are there simply for the pay check. First hand I have witnessed several of the 5 employees sit in the staffroom glued to their phones whilst janitorial staff twice/three times their age would help[ unload medical supplies from a truck. Turn up late, go home early, complain about getting their hands dirty but no problem collecting their pay check. A waste of public money and to be fair, they often have no skills and furthermore there is little continual work for them to do.

Be fair now. . .some of them 52 weekers them are excellent workers them!! These ones in question are "political" baggages from the FNM government. . .now the PLP problems!! If the government can't "use them". . .they have not been hired for one year yet. . .government has an option to dismiss them without cause!! SO SEND THEM HOME. . .OR FIND WORK FOR THEM TO DO!! Otherwise. . .don't waste my time talking fool. . .just send them to "they FNM" friends who have businesses!!