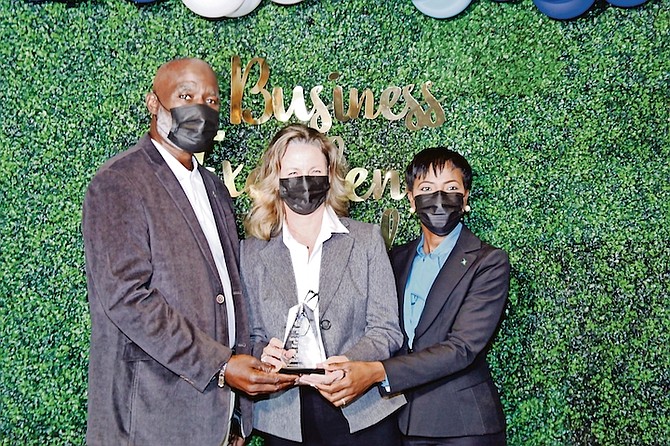 GRAND Bahama Minister Ginger Moxey has indicated the government is committed to rebuilding and revolutionising the island of Grand Bahama and its economy.

And she called on major stakeholders on the island to also help bring about success for Grand Bahama.

“We must unite and work together to build alliances for… the ultimate goal of ensuring that GBI is a success - we are all in this together,” Minister Moxey said at the Grand Bahama Chamber of Commerce ninth annual Business Awards ceremony yesterday held at Pelican Bay Resort.

She commended businesses that have remained open in Grand Bahama following Dorian and the onset of the COVID pandemic. “As a Grand Bahama business owner, I can attest to the challenges we have faced over the past decade,” Ms Moxey said.

The minister noted the devastation of Hurricane Dorian in 2019, followed by the onset of the pandemic, strained Grand Bahama’s already fragile economy.

“The Davis administration is also aware of the challenges that GB has faced in the past decades. Nonetheless, we will deliver on our commitment to recover, rebuild and revolutionise our island, our economy, and usher our people into a ‘new day’.”

Minister Moxey commended the Chamber for its role and the support and assistance it gives to businesses in Grand Bahama.

“This year’s event under the theme, ‘Celebration of Excellence,’ acknowledges and highlights businesses on GB that have stayed the course,” she said. “This kind of recognition is a beacon of hope for our local business owners who have faced and overcome some of the most challenging circumstances that we have encountered in our island’s history.”

She promised to live up to the pledge made on November 1 in the House of Assembly “to do the people’s business and utilise every resource at my disposal to get the job done for GB”.

“I plan to do this through partnerships for developments,” she said.

She said the success of these partnerships for the island is dependent on efforts between government ministries, the Grand Bahama Port Authority, GB Chamber, Hutchison Port Holdings, industry stakeholders, and the business community.

“I thank all businesses represented here today that have kept their doors opened and our people employed. To all business excellence award nominees, I congratulate you, be encouraged, and know that your efforts have not gone in vain.

“I am honoured and humbled,” Miss Ferguson said. “It was not expected.”

Pure Limited is a bottled-water and packaged ice company. Ms Ferguson explained the business initially started as an extension of another business on another island. When the opportunity presented itself, she purchased it.

“I have a partner in the business and without him, we would not be where we are,” she said. “I do have support and I have made it this far after Dorian and COVID because of the support system I do have between my partner, family, and friends, the GB community. As much as I try to support the community, they have very much supported me as well.”

She encouraged other entrepreneurs to “stay the course”.

“It is not easy, and there are many days where you will want to say ‘no, thank you.’ There are days when you are going to want to bow out because it is rough, it is hard. It is not easy, especially as a female in business. But you have to stay the course,” said Miss Ferguson.

Chamber president Greg Laroda commended Ms Baptista for her outstanding work in the business community and at the Chamber.

“She has always stood out as an outstanding individual, and she represents a company that has served this community well, especially during the recovery of Hurricane Dorian and this past year during the lockdown, he said. She continued to do great work and was the driving force behind the various surveys that the Chamber conducted after Dorian and during COVID.”

Mrs Baptista said it is up to everyone to make Grand Bahama grand again. “We are all in this together,” she said. I got involved in the Chamber and hope everyone will become involved because Grand Bahama is meant to be grand – let’s all commit to making that happen,” she said.