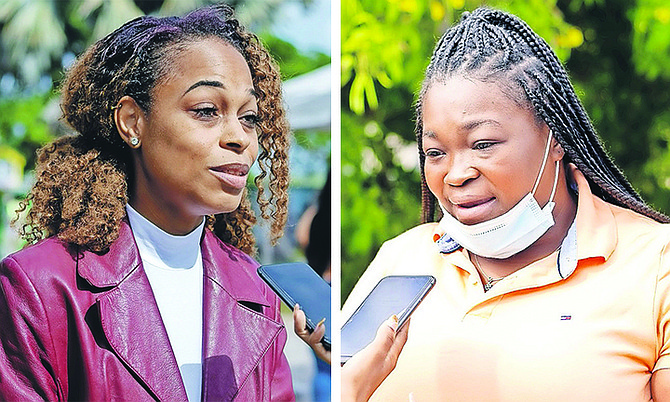 DAVINA Smith was only 13 years old when she conceived a child by her molester.

The now 33-year-old remembers enduring the abuse at the tender age of six.

“Basically, almost every day as far back as I could remember at the age of six, he would come into the room and he would start touching me.”

“That’s how it started,” she recalled yesterday.

“Then it started from touching to being penetrated at the age of six and after he was done, he would then say don’t tell anyone it would ruin the family.”

Ms Smith said she remained silent until the age of 15 when she already gave birth to her daughter and had enough of the molestation. It was enough to run away from home.

Ms Smith was among other women with similar stories of molestation who told their stories to The Tribune at Rawson Square yesterday following a demonstration that called for better laws and protections for women and children.

It was a collaborative effort with other organsations to take a stand, according to Women United Founder and President Prodesta Moore.

“We’re here in solidarity. We have people here sharing their stories of abuse. We want to sensitise the nation that this happened. We want to let people know that you are not alone. That it’s okay to tell your story,” Ms Moore said.

“Talk to other people. When you see a child or someone being abused, call the hotline. Be a neighbour to that individual or that person that is being abused.

Lashan Robins first spoke of her abuse when she was 21, by confiding in a pastor.

At around the age of seven or eight her abuse started, she said.

She told this newspaper that her suffering came at the hands of relatives.

It started with touching and escalated to sexual assault – sex being one of the acts.

Ms Robins, 34, said: “When I got older and it’s not that I had much more to say. It was just maybe because I was older that they decided to stop.”

She reflected on the various aspects that the ordeal affected.

“I never wanted to be home. I was always labelled as being rude as a child because I didn’t want to be home. I didn’t want to be inside. I would always rather stay outside. I rather stay with other families and I just wanted to guard myself from that environment. So, by the time as I went to school I wasn’t focused. I couldn’t focus on my studies. I didn’t study when I was home because of things that was going on,” she explained.

“I didn’t know if it was normal or if it was abnormal. I just knew that there was something that was happening to me and I was told to be quiet.

“..I forgave them and myself because a part of me felt responsible for not saying something. For not putting boundaries. For not speaking out for myself.”

Similarly, Ms Smith was misunderstood when she ran away from home

“My aunt found me they took me to the station. When I went to the station, the police told me I wanted to be bad, rebellious. So, I slept in the cell that night. I went to court the next day and told the judge what had happened, why I ran away from home, and they sent me to Sandilands.

“I don’t know why they sent me to Sandilands. I stayed in Sandilands for about six months in the adolescents centre,” she explained.

She believes one shocking revelation forced her mother to believe what had happened to her.

“I was in my early twenties when she really believed me,” she recalled. “They had a fight and I went to my mother’s house and I told her ‘what are you going to do? You have other girls here. You have my sisters here…

“To abuse your children and to abuse me?”

“I said ‘You know what he did to me” and then he shouted ‘No I didn’t do anything to you. You’re lying’ and so my little sister said ‘Yes, I saw you’.”

Ms Smith and Ms Robins’ stories and the thousands of others are reason enough, Ms Moore said, to ensure the country saw to it that that kinds offenders get death sentences and stiffer penalties are enforced.

The Tribune has become a most disgusting and disgraceful tabloid that seeks to prey on the weakest and most vulnerable among us by publicizing their misery to make a buck for its financial stakeholders. These stories can and should be told without mentioning the names of those who have been so cruelly and brutally victimized. Shame on The Tribune for being so exploitative!

I read this and the first thing I thought was that even this story is protecting the abusers....one lady just calls him 'the molester' and the other seems to only speak of interaction with her mother. Are both these ladies unconsciously still sheltering and keeping the secrets of their sexual abusers?