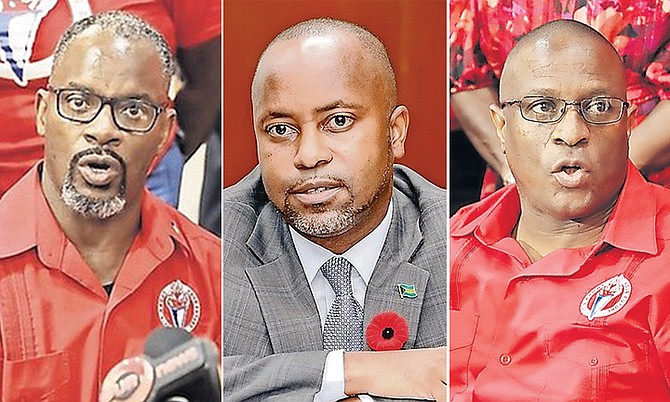 WITH one day left until the Free National Movement’s leadership convention, the three contenders vying for the party’s top post are urging party members to turn out in a show of support, all insisting they are the best choice to lead the organisation.

This as St Barnabas MP Shanendon Cartwright endorsed Mr Pintard for leader of the FNM.

Some of the MP’s campaign promises include engaging Free National Movement freedom fighters, better communicating with the Bahamian public and fighting to include more women in politics among other things.

Speaking to The Tribune, Mr Pintard said he was proud of the campaign he and his team ran in the last several weeks and felt confident about his chances heading into Saturday’s race.

“We are confident going into the weekend but we want to encourage all delegates to come out,” Mr Pintard said yesterday. “It’s a safe environment within in which to vote. The process will be smooth. Once again, I wish to make the case that we are stronger together. We are weaker when supporters are not inclined to work collaboratively with each other or when during election time, they are disaffected and decide to stay home.

“The consequences could be dire because what we in essence end up doing is selecting an administration that may not act in the best interest of the country.”

After the party’s crushing defeat in September, Mr Pintard said there is a need for the party to become more united, adding that he was the most suitable candidate to do the job.

“Having worked in the past in so many pivotal positions in our organisation, knowing the members of the organisation and understanding the organs of the administration having been in charge of them as chairman, having the correct temperament and not having belonged to any particular camp, I’ve always stood as a unifying force and I’ll continue to do that work as leader as I believe, working with folks even if they have dissenting opinions. I’m prepared to work with persons who see things differently because it’s out of that dialogue we will arrive of the best possible solution.”

“I also believe there’s a need for leadership that will communicate and work with others with a spirit of humility. Good ideas not only flow from the top from the bottom, but from the bottom to the top in all directions in our organisation. Hence, being a good listener is extremely important. Communicating even tough messages to the public with a sense of humility is very important, especially in the midst of this pandemic.”

For his part, Mr Lewis described himself as a “team player” who will listen to party members irregardless of their rank.

“The message I’ve been selling is that we are open to listening, open to talking, I’m a team player,” Mr Lewis said yesterday. “I’m going to have a seat at the table for the youth’s arm of the Free National Movement, the TYA to give them a seat at the table and allow them to have their input in the way forward.

“So again, I’m a team player,” the FNM MP added. “I will listen to the voices of all who are a part of this party because we do have the talent internally. We have a chance now to do an introspection of where we are and make the necessary adjustments to make the FNM an even better party so I feel confident going out there. I want to bring something new to the table and we’re starting from the bottom up.”

Sharing similar plans, Mr Thompson told The Tribune yesterday his vision is to move the party forward, noting his record speaks for itself.

“We feel very, very confident going into Saturday,” he said. “We have reached out to hundreds of FNM delegates. We’ve made the case to those delegates that I’m the better choice and that I have a vision to move the party forward and that persons who would’ve looked at my record and have been able to look at my experience of being an attorney, experience of being a former member of parliament, deputy speaker and also a former Cabinet minister for Grand Bahama and in particular former Cabinet Minister with responsibility for the Ministry of Finance.”

“We’ve made the case to delegates that the party needs new energy and passion and really a new way of politics and that I have what it takes to unite the party having served under (former prime minister) Hubert Ingraham and having served under (former prime minister) Dr Hubert Minnis and that I have the ability to reach out to all sides and keep all sides together in addition to the vision plan of focusing on service and ensuring that we do those things that rebrand the party and take the party back to our core principles.”

In a press statement last night, Mr Cartwright said while all of the leadership candidates should be lauded for their contributions, he was of the view that Mr Pintard fulfilled the demand for generational change and transformational leadership that Bahamians have wanted for a long time.

“...In this moment with his capacity to unify the Free National Movement it is my humble belief that Michael C Pintard fulfils that promise,” Mr Cartwright said.

One thing is for sure, the FNM party is kaput for as long as Minnis and Culmer are allowed to remain in any way involved in its affairs.

The FNM, sadly, is back, Lost in the wilderness of multiple political tragedies. Still not accepting responsibility for all of its failures and still not understanding that it's your core support base that is the bridge that will build the rescue plan from a life of wandering lost in the pitiful wilderness of political failures and shame.

The Brave/Chester team will do its best to lock the gates of any FNM return; in what I can estimate, the gate will remain closed until the FNM rebrand with new faces and faces that didn't remind supporters of the disastrous failures and missed opportunities of the Minnis Administration.

As the Bahamas turns its direction to its 50th anniversary and as the world continues to evolve, the Bahamas will be placed in the limelight, attracting investment, creating jobs and innovations. The Brave/Chester team will move our country to a realm that makes the sad complaint from voices lost deep in a wilderness of political tragedies; silent thumps in the darkness of night that no one hears.