Loretta - Plp Now The Party For Me 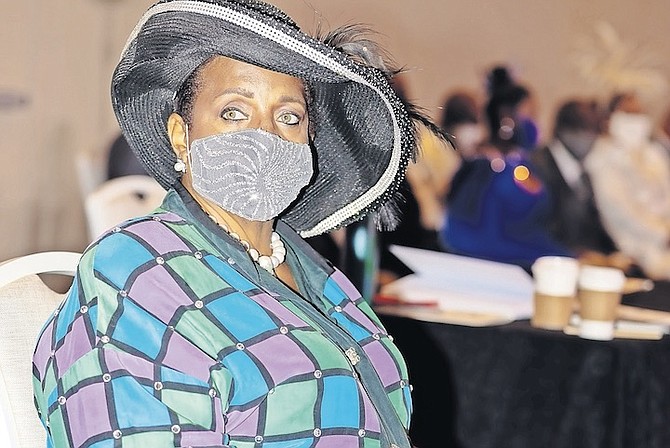 LORETTA Butler-Turner, the Davis administration’s newly appointed consultant to the Small Business Development Centre, said she is now aligned with the Progressive Liberal Party, shifting further away from the Free National Movement which she once led in the House of Assembly.

Asked if her new role signifies a preference for the PLP, she said: “I have got to tell you very clearly that as an independent candidate in the last election that I participated in, obviously you know that I would no longer have been aligned with the FNM and I’ve had four-and-a-half to five years to look at what the previous party I had been a part of had done. I loved, I truly loved - this is no secret – I loved the PLP’s blueprint for ‘a new day’ and I believe that if I could help to make that a reality, then yes, there’s definitely that shift that you’d like to know about.”

Mrs Butler-Turner’s new appointment and alignment with the PLP are significant developments in her storied public life.

She became the first woman to be Leader of the Official Opposition in December 2016 after most of the FNM’s parliamentary caucus voted to oust former Prime Minister Dr Hubert Minnis from that role.

She was first elected to the House of Assembly in 2007 as the Member of Parliament for Montagu and was elected MP for Long Island in 2012. She was Minister of Social Services from 2012 to 2017. Running as an independent candidate in 2017, she lost her re-election bid and subsequently retired from frontline politics.

Her grandfather, former Governor-General Sir Milo Butler, is a figure of foundational significance in the PLP. Over the years, some PLP supporters have hoped she would follow him and align herself with the party.

During a press conference at the Office of the Prime Minister yesterday, Mrs Butler-Turner said she hopes to make a positive difference as consultant to the SBDC.

“…Over the last four-and-a half years my life has been truly devoted especially to young people, in making them more self-sufficient in their dreams and in expanding our economy,” she said.

“I was delighted to be invited to this particular position because I believe that small businesses, micro businesses and self-employment is truly a part of what we need in The Bahamas when we talk about inclusion. So, today it is a great privilege and an honour for me to take on this challenge.

“I am so proud of the fact that people would say most Prime Ministers choose people who are party supporters, who are persons within their advisory. I’m so glad that as a Bahamian, a nationalist, that the Prime Minister saw what I was doing, appreciated it, saw that I could probably be a very good fit for the dreams of the PLP, the ‘new day’ government in expanding our economy.

“Most importantly for entrepreneurship he knows that I have a very strong passion for women so one of my mandates is also to ensure that women in particular are given the ability to build their own businesses. As you all very well know, the majority of our households are run by women.

“As you also well know, there have been so many workers that have been displaced, displaced from their jobs, displaced from their homes by natural disasters, Hurricane Dorian, but these displaced workers have a lot of latent talent, they have a lot of ability to be able to be creative, they have the ability to do things on their own because jobs have become very difficult and so we’ve seen a plethora of growth in that regard and we want to be able to help direct that.”

This was very strategic move by Brave Davis. Admirable too. At the start of the last administration I mentioned that Minnis would send a very strong signal if he gave Komalafe a substantive post. at the time I had no idea, as Carl Culmer described it, how "petty and conniving" he was. Very good move.

Perhaps with Mrs Butler-Turner there the SBDC will evolve into what it should be, a place that fosters innovation and not just a small grants program with a once in a while exception

and no there's nothing wrong with small grants, but to turn this country around dramatically, we need innovation

... and this is what political opportunism (not statesmanship) looks like!

Master move on PM Davis part. . .for real. Any fool can "see that". . .but beware of taking a snake into ya bussomes. . .she is "low hanging fruit". . .no big deal. . .but a step in the right direction none the less!! Heen remember that "Rollins" thing aye? All he need to do is "keep them dang tiefin PLP them in check" and continue to "squar" labour issues with the people and he will be "sitting pretty" for the next election!! But yinna PLP them can't keep yinna "mits" off the people's money. . .yinna ger "sink" hm for sure. . .iffin he don't watch yinna mobbish actions!!

Ohhhhh......this is why they were holding hands and acting all buddy buddy at the opening of Parliament......and then she suddenly surfaced all over the news outlets......I am so slow......wow!!!!

I repeat what was said above by @licks (Jesus must be coming), "master move". Now he just need to appoint Ingraham as special advisor to the Disaster Recovery Agency. They was smiling at each other too.

Brave is turning out to be a pleasant surprise. I hope this continues throughout the 5 years and I hope its more than surface deep.

Comrade Sister Loretta Butler-Turner's selection serve alongside Premier "Brave" Davis, should act as a sufficient wakeup call to the mostly 480 hand-picked delegates now making their way to tomorrow's red party's unnecessary and rushed one-day leadership convention that neither of the three Mr. Minnis's Jump Offs, has what it takes to be occupying the red party's top post as the Queen's official opposition, and everything else like this and that's to follow a real leader's words and action...It's never too late to revolt on the convention's floor against being rushed into a sinister short version of a convention by remaining focused on...Free at last! My soul is dancing!” - Sir Cecil Wallace-Whitfield,.― Yes?

Look at Gravey Davey eyeing the Long Island seat in Parliament. Run LBT for the PLP in the next election, Adriane is going to have a tough time winning.

Oh what a tangle web we weave once we practice to deceive. Can you imagine the epiphany this turncoat must have had to abandon the FNM? But then again she got Turner in name. She should be ashamed of herself. A once aspiring leader is now a boot licker.

Quote, "Ask not what your country can do for you. Ask what you can do for your Country" it is all about our beloved Bahamas and its people what can be done to make the Bahamas better.

Sir Milo Butler would be full of laughter and joy to see his Granddaughter.,

She has shown her true colours. She apparently tried to undercut the leadership in the fnm. Why would the fnm or the plp want a.person whom they cannot trust? But, it seems like this type of thing is rampant in our boring political stage. It happens all the time, I am done with voting.it truely is a waste of time.