Minnis: Pintard Will Have My Support 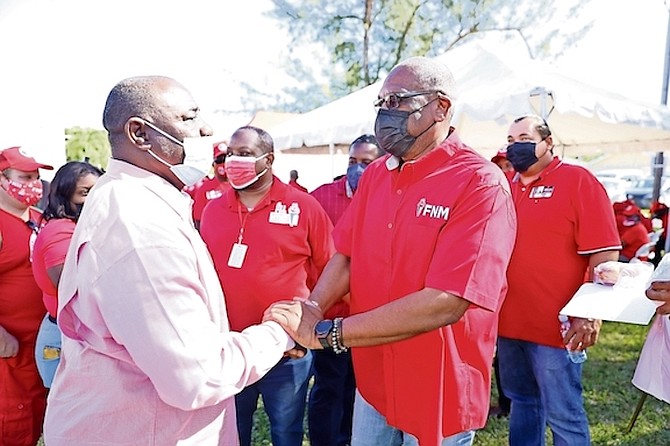 The party held a one-day leadership convention Saturday and elected the Marco City MP as leader of the party.

The former prime minister said despite him leading the party to a loss in the September 16 general election, the FNM is still the best choice for The Bahamas.

“I am a party man,” Dr Minnis said yesterday in an interview with The Tribune. “I am an FNM and I will remain an FNM. My job, like all FNMs, is to work together to ensure that we remove the PLP.

“All of the programmes that we instituted are working. The economy is coming back, but now we are facing a new variant — the Omicron variant — and that will present great headwinds for us moving forward.

“It has a plan to try and decrease poverty within the country and increase the middle class so as to expand the middle class. We must continue on that road and I will do all I can to ensure the success of this Bahamas and our party.

“Pintard and the entire party will have my full support. I am an FNM.

“I want the PLP removed. I want the FNM back in power because we have direction and a plan. So, Pintard has my full support,” Dr Minnis said.

The Killarney MP also responded to criticism that his absence on stage where Mr Pintard gave his first remarks as party leader signaled that he would not support the Marco City MP.

Both former leaders Hubert Ingraham and Tommy Turnquest stood on either side of Mr Pintard as he spoke.

“No, me not being there does not show that I don’t support Pintard,” Dr Minnis said. “That is a bad interpretation. That is an incorrect and wrong interpretation.

“Pintard was chosen by the people and Pintard will have my full support.”

Similarly, Mr Thompson said he would be supportive of the new leader and accept the outcome of the convention.

“The people of our party have spoken and I congratulate our new leader Michael Pintard,” Mr Thompson said in remarks to The Tribune.

“The new leader has my full support. I wish to thank the many supporters and voting delegates for their support and encouragement. We have our new leader Michael Pintard and we must all join together to support him in leading our party.

“It is time for us to unite and reignite our Free National Movement in the best interest of all Bahamians.

“Yesterday’s result has only motivated me to work even harder for my constituency, our Party and our Country. It is not about a position, but making a difference. I give God thanks for his favour, grace, purpose and the opportunity.”

Mr Lewis did not respond to The Tribune’s inquiries yesterday.

For goodness sakes Papa Hubert, the new leader is talking about fostering brungin' together fractions new breed intelligence pathway moving beyond September 27, 2021, and everything else like this and that ― excluding gettin' drunk in the holy spirit. fluences of hangovers likes Papa Hubert, Minnis, Jeff Lloyd, Edison Key, Marvin Dames, Kwasi Thompson, shouldn't force 'em kick all youse out to the Mackey Street curb, ― Yes?

Both of them are just alike. Twins in evil. They have both made bad deals for the Bahamas do not forget the Papa BTC deal. doc lighthouse point deal OBAN

____ Livestreaming Pride of Nationhood: Declaration of the Republic and Installation of the President of Barbados -----

His nightmare of a track record speaks for itself. Ask some of his former ministers.