SAC cheerleaders get ready for their chant.

IT was a fitting Big Red Machine Madness tribute as the faculty, staff, students, parents, alumni and friends came together on Saturday to help close the door on a long and illustrious career of Sonja Knowles as a former student, teacher, vice principal and principal of St Augustine’s College. 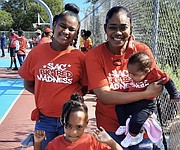 In a show of gratitude and appreciation to Ms Knowles, SAC’s Athletic Department put on a Big Red Machine sporting frenzy between students of the four houses – Seton, Alcuin, Bernard and Leonard - in various competitions ranging from a three-point shooting contest, a home run derby and a mixed medley relay.

SAC’s athletic director Jason Edwards said there was no better way that they could honour Knowles, who will demit office at the end of the school year in December.

“Big Red Madness was just a small taste of the SAC experience,” Edwards said. “Our athletes were on full display and for me to say it was exciting would be an understatement. This event was first intended to be for the student population to engage in activities outside of the classroom but it quickly turned into something more meaningful.

“It was only right that this event be in honour of our principal Ms Sonja Knowles who is a sports enthusiast and avid sports fan. The Big Red Madness was embraced fully by SAC alumni. The students got the chance not only to compete in sports but to also interact with many alumni and long time SAC supporters. It’s safe to say SAC PRIDE is alive and here to stay.”

Edwards thanked the administration, teachers, parents, alums, faculty, staff and his committee for helping to make the event such a success that many persons in attendance were calling for it to become an annual event.

Saturday, however, belonged to Ms Knowles, who was proud as a peacock as she strutted around SAC’s playing field, absorbing every moment of the activities, as well as engaging in conversations with so many people. She even took the time out to dance her feet off at the end of the DJ competition that brought the curtain down on one of her memorable moments she will take into her sunset.

“It was a wonderful event, and it was well-attended. Inter-house sports is one of the pillars of SAC’s foundation where sports and school pride is concerned,” said Knowles after she engaged in the awards presentation to the winners of the various competitions.

“Due to the pandemic, the students haven’t been able to enjoy any extra-curricular events in such a long time. It was great to see them engaging in friendly competition. I also enjoyed seeing SAC alumni and I appreciate those who took the time to wish me well in the next chapter of my life.”

As a former alumni, Marici Thompson, who will assume her new post as principal when school reopens in January, expressed her kudos on the SAC pride exhibited and what could be her introduction to a promising tenure in office ahead of her.

“I was elated to see the amount of SAC alumni who came out to the event, and I look forward to it becoming an annual event. I really do,” she said.

“I think coach Jason Edwards and his team did a really great job. Of course, I am happy that the students got the opportunity to fellowship with one another through sports.”

At the end of the day, there were no overall winners, but just the fact that the student-athletes got a chance to display their skills were more than enough for them to fathom in the COVID-19 environment, which has hindered all sporting activities outside of the popular inter-house competition.

With no competition since the start of the pandemic in March, 2020, the student-athletes were just delighted to engage in their own rivalries and secure bragging rights until sporting activities return to some sort of normalcy.

On the court, Neil Gibson of Seton emerged as the bantam boys’ champion over Trent Evans of Bernard. Leonard’s Azariah Smith took home the junior girls’ crown with Dior-Rae Scott of Seton as the runner-up. Seton’s Carmeljo Woodside won the junior boys’ title over William Sturrup of Bernard.

Arianna Gomez of Alcuin clinched the intermediate girls’ title with Leonard’s Azariah Marshall as the runner-up. The boys’ title went to Bernard’s Jeloni Morrison with Brandon Hall of Leonard as the runner-up.

“I feel really good about the event. At first I was kind of nervous, but after the first round, that nervousness went away,” said 15-year-old Gomez, a 10th grader.

“I’m just proud to win this event in honour of Ms Knowles. She was a great principal and she’s leaving now. I will definitely miss her.”

And in the senior girls’ division, Orielle Johnson of Alcuin pulled off the win over Gabrielle Murphy of Seton. Jaden Percentie of Leonard was the senior boys’ winner with Brian Carey of Seton as the runner-up. Percentie also carted home the overall trophy for producing the most shots.

“I feel good about my performance. I really wanted to do something special since we didn’t have a season,” said Percentie, a 18-year-old 12th grader who hopes to make it to the professional ranks in the sport. “I practiced a lot so I expected to do very well. Plus, I wanted to let Ms Knowles go out with a bang. She will be missed. She’s one of a kind. You can’t replace her. She’s Ms Knowles.”

On the field, the home run derby saw Leonard’s Tatum Watkins and Seton’s Neil Gibson capture the bantam girls and boys’ crown, Seton’s Dior’Rae Scott added the junior girls title to her triumph in the three-point competition and was joined by Sherman Ferguson of Leonard with the boys’ title.

Hutchinson also was declared the overall champion with the most hits.

“I just want to thank SAC for accepting me into their school and for allowing me to participate in sports here,” said Hutchinson, who transferred to SAC in grade nine from Grand Bahama in 2018.

“I just hope that we have some inter-school sports next year because I’m looking forward to representing the school.”

As for the event, the 17-year-old Hutchinson, who is now in the 12th grade, said it was definitely a good way to get the student-athletes acclimatised to some sporting activities again after being off for a while. He was proud to salute Ms Knowles before she leaves office.

In what turned out to be the highlight of the day, the infamous SAC track brought back so many memories for those old enough to remember and those only young enough to hear about it, as the mixed gender 4 x 400m relay, which is fast becoming a staple to watch at various track and field meets, took place.

Alcuin set the stage winning the bantam and junior races. Seton showed their prowess in the intermediate division, while Bernard reigned supreme in the seniors. The only house shut out of a victory on the track was Leonard. The event certainly displayed some of the top talent that SAC has to offer if they get the chance to participate in any BAISS events next year.

Unfortunately, Knowles, who served previously as the chairman of BAISS, won’t be there to bask in her SAC pride as the principal.

Annastacia Sands, another member of SAC’s Athletic Department, summed up the event as an “awesome” one and without a doubt, the best way sports wise to show their appreciation to the woman who continued the SAC dynasty after replacing the late Leviticus ‘Uncle Lou’ Adderley. “This was the first time that we in the PE Department decided to do something that was different and it was only fitting that we did something special to honour our principal as she gets ready to leave SAC,” Sands said.

“It was called the Big Red Madness, but the turnout was a lot more than we anticipated. “So we’re glad that we could hold the event and to honour our principal, who was a big supporter of sports here at SAC.”