She Did It Again! Former Miss World Is The New Miss Universe 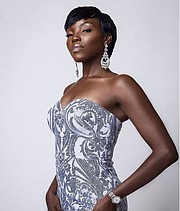 On Sunday, one determined woman of a line-up of 16 applicants fought her way to the top and walked away with the Miss Bahamas Universe crown during the pageant’s grand finale at the Rosewood Baha Mar.

Chantel O’Brian, who now holds the title, is no stranger to the pageant world. In 2015, the beauty queen won the Miss World Bahamas title on her third try.

Chantel thanked her mother for encouraging her to never give up even after her losses.

“Last year, she was the first one to say, ‘Well, when you go back just get a nice gown and a really good sponsor’. She is so inspiring. I am happy to sit here and know that I didn’t give up and it was all worth it; doesn’t matter how long it took, it happened. I have waited a long time for this moment, a feeling of relief,” she said.

Chantel encouraged all young Bahamian women interested in pageantry to just go for it.

Miss Bahamas Universe National Director Anthony Smith said the turnout of last Sunday’s event was a great one, given its boutique style due to COVID-19 restrictions.

“We had a room of 150 persons. It was a very contained space and that is what made it different. We knew we wanted to have a coronation... crowning the winner from the top four finalists. But the response from the public, the pageant fans and the families of the young ladies, was...they wanted to actually see a show. They wanted to see the girls in the nice dresses and see who’s going to win and all that, so that is what inspired the boutique setup,” he said.

For those who are true pageant fans and who have followed the journey of Chantel, Mr Smith said they are probably very much aware of her experience.

“Chantel was a former Miss World, so this wasn’t her first rodeo. And I think that is one of the things that was considered in the judging. The young lady that would have been chosen would have little time to prepare to go to Eilat, Israel, this coming December to compete. So you have to get the most prepared young woman in order to compete, and obviously she demonstrated with experience and the pageant that she is prepared, and she is ready to represent this country to the fullest extent of her skills and ability,” said Mr Smith.

Chantel is a first-generation college graduate, motivational speaker, model, entrepreneur, and a Christian. She considers charity and mentorship to be at the core of her identity, having been born into humble beginnings in Englerston. She obtained a Bachelor of Administration in Business Enterprise from the Edinburgh Napier University in Scotland. While obtaining her degree, she founded PS O’Brian Consulting, a pageant, etiquette, runway coaching and consultation agency.

“Chantel has come from a long way…With her background as a pageant coach and former title holder, she has been behind the scenes and on stage. She brought all of those experiences to the table, and I think that was advantageous to her,” said Mr Smith.

“Also at heart, she is a very giving person. She is a very community-minded person, and she is someone where pageantry sheds light on her platform, which was ‘Perfection is a Myth’,” he said.

Part of what won the judges over was Chantel sharing her story of growing up in a single-parent home and how her family was evicted from their house at one point.

“It really boils down to who she is as a person, which is a genuine spirit. She shares her testimony in order to help others. And she has always been that way, very respectful and a very respected young lady. There were outpouring congratualtions from her sisters in the pageant community so that means a lot, it means this journey has been earned for her,” said Mr Smith.

Via her marketing and branding business, Chantel has contributed to the success of several pageants, including Miss Universe, Miss World and Miss Earth Bahamas, NAM, IJM, Collegiate, Miss Black International Ambassador, and more.

Chantel has continued to actively build her personal brand as a spokesperson and print ad model for local companies. She is the co-founder of The Leading Ladies Project and the creator of "The Final Crown", a faith and pageantry vlog. Through her initiatives, Chantel advocates for underprivileged youth by fostering confidence and the feeling self-worth, which are both needed to realise and achieve dreams.

This coming December, as the newest Miss Bahamas Universe, Chantel will represent the Bahamas in Eilat, Israel, on the international stage.