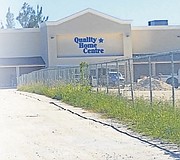 A well-known Bahamian retailer yesterday said it is aiming to complete its eastern New Providence expansion in time for Christmas 2021 and reach a market segment currently underserved.

Don Davis, Quality Home Centre’s general manager, told Tribune Business in a brief interview that he hoped the department store’s second location will signal to other entrepreneurs and Bahamian consumers that the economy is continuing to rebound following COVID-19’s devastation.

He revealed that the merchant had been seeking to grow via a new location since 2019, and it is now constructing its second Quality Home Centre format on land adjacent to the former Pepsi-Cola and Robin Hood property on Prince Charles Drive.

“We’re trying to open before the holidays,” Mr Davis told this newspaper. “We had the plans in place two to three years before COVID-19. This was something we started before; this started in 2019 before COVID came out.”

He added that the expansion was about “growing and trying to reach the customer in different areas”. The closest competitor to the new Prince Charles Drive site, in terms of product type and range, will likely Kelly’s Home Centre at the Mall at Marathon, thus giving the second Quality Home Centre a proximity advantage to consumers in areas such as Winton, Yamacraw and Nassau East.

“There’s a lot of people out east, and there is pretty much nothing out there,” Mr Davis said. “That’s where we’re looking to expand into different areas, bringing it closer to them.”

He voiced optimism that Quality Home Centre’s second location will match the performance of its flagship Carmichael outlet, adding: “I’m not sure yet, but I hope it will be the same as Carmichael.”

And Mr Davis said the Bahamian-owned retailer’s expansion, and investment, should encourage other entrepreneurs to risk their capital while also signalling to Bahamian consumers there is hope for the future in the aftermath of Hurricane Dorian and COVID-19.

“I expect them to see it that way,” he added, “getting out of this COVID situation and more people getting vaccinated, and bringing the economy back to normal.

Mr Davis yesterday said he did not have information to hand when speaking to Tribune Business on how many jobs will be created by the expansion, nor on the level of investment being made or size of the new store.

The first Quality Home Centre, located at the junction of Carmichael and Blue Hill Roads, involved a $9m investment when it opened a decade ago just before Thanksgiving 2011. Located next to the Southwest Plaza, the inaugural 50,000 square foot outlet sought to provide such a wide range of products that Bahamians would no longer have to travel to the US to shop.

This newspaper’s research showed that around 80 staff were hired initially for the first store, with its principals - Mr Davis and his brother, Trevor - then harbouring ambitions to stock up to 40,000 products.

The product mix included a toys department; Christmas decorations; clothing for adults and children; hardware and paints; and mirrors, lamps, tables and fixtures; plus barbecues, fridges and couches. Before the Quality Home Centre, they had already launched the 8,000 square foot Q Club on Mackey Street.

Tribune Business was initially informed that Quality Home Centre was acquiring or leasing the neighbouring site that hosts the former Robin Hood store, but this newspaper’s research showed this was not the case.

Leigh Rodney, the Compass Point owner, who holds a mortgage on that site as security for loans he previously advanced to Sandy Schaefer, the Robin Hood owner who has since departed The Bahamas, revealed that while Quality Home Centre and its principals had looked at his property the two sides were unable to reach a deal.

“They looked at the building, said the price was too high and ended up building a property right next door behind the church,” Mr Rodney disclosed. “They approached me a year or two ago. They said this building was a tear down, it was not a solid building, which was not the case. It seemed as if they were negotiating just to buy the land.”

The Compass Point chief, who was embroiled in controversy with the former Minnis administration over plans to close that resort due to its failure to address his concerns over the hotel licensing regime and other issues, said he had been trying to sell the former Pepsi Cola and Robin Hood site “ever since Sandy Schaefer left the island” some years ago.

“It hasn’t been overly busy,” he added, in terms of buyer inquiries. “We’ve kept the sign up. There’s a limited number of people that will come to The Bahamas looking for a 40,000 square foot industrial building.

“I have approached a couple of people in The Bahamas that I recognise as being good businessmen, saying how about making me a partner and you can move into this larger building? I’ll be your landlord and partner, and it will be a good deal for you. You can become the size of a Bahamas Food Services. I’ve not found anyone to make that leap.”

As you may notice, there is a fierce battle going on amongst the ‘big boys’. Not only just for market share, but for survival. The Solomons/ CostRight, AID, Kelly’s, CBS and, of course Quality Home Center. Not only are these stores expanding their footprint with new and/or expanded locations, but they are also expanding into other lines f merchandise. Some into clothing, hardware and footwear. And they are not only gobbling up smaller entities, but they now also pose a threat to the Super Values and Qualify Markets who will definitely not be able to continue to compete on just a foodstuffs alone format. And the format of these new stores is to carry more SKU’s but less inventory. Meaning the variety of items they sell will increase but the quantity of each item kept in inventory will decrease. In marketing it is called JIT or ‘just in time inventory’ when new inventory arrives just before the old inventory is about to run out. But will these giants with their expanded SKU’s be able to survive? The market is depressed but still strongly competitive.

You are correct about the expansion, but the market share is not having a corresponding increase. The pie is not getting any bigger since the 2008 global financial crisis Even the gass stations are selling food items to survive and most of them dont even provide air for your car tire no more ... so in time a few of the big boys will fail just like John.S George, Maura's Robin Hood and City Markets did.