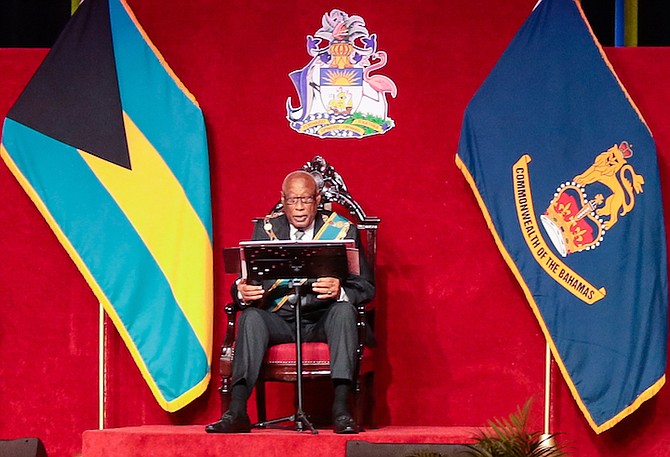 AS the country grapples with the economic fall-out from COVID-19, the new Davis administration has promised to increase pensions for the elderly and raise benefits for the disabled community as a part of its plan to improve social assistance.

The pledges — some of which were announced before on the campaign trail — were outlined in yesterday’s Speech from The Throne, read by Governor General Sir Cornelius A Smith.

Speech from the Throne in full

Yesterday, the government recommitted itself to much of what it promised the Bahamian people in the lead up to the election, including a minimum wage increase and increased social assistance for hurting Bahamians.

The speech read: “Even as we vigorously pursue avenues of progress throughout our country, my government is mindful that we will not leave behind the most vulnerable or discouraged people in our society.

“My government will enhance social assistance programmes. My government, in collaboration with the private sector and non-governmental organisations, will implement immediate relief measures for Abaco, Grand Bahama and Ragged Island.

“Through partnerships with Social Services, Urban Renewal and civil society, including the churches, my government will work to ensure that every Bahamian has life skills, food to eat, clean water and a roof over their heads.”

The Davis administration also promised to dole out additional benefits for the elderly and disabled and re-implement former social assistance programmes aimed at helping vulnerable families.

Sir Cornelius said the government will also work with relevant stakeholders to bring relief to mortgage and rent payers in a bid to reduce homelessness and also introduce new legislation that will allow the establishment of an Urban Renewal Authority.

The government’s promise of further social assistance comes at a time when the country is facing one of its worst economic crises and $10bn in debt.

During the onset of the COVID-19 pandemic, thousands of Bahamians were either laid off or temporarily furloughed after a near total shutdown of the nation’s leading tourism industry.

The former Minnis administration had sought to assist those impacted by the pandemic by implementing several COVID-19 relief initiatives, including a food distribution programme.

However, some of those programmes have since ended, with government officials announcing plans to put in place new ones.

They do own us. Get a copy of Who Owns the World: The Surprising Truth About Every Piece of Land on the Planet by Kevin Cahill. Make sure your heart pills are nearby when reading it 'cause in fee simple means that you are a tenant.

You'll learn that: Only 15% of the world's population lays claim to landownership, and that landownership in too few hands is probably the single greatest cause of poverty. Queen Elizabeth II owns 1/6 of the entire land surface on earth (nearly 3 times the size of the U.S.). The Lichtenstein royal family is wealthier than the Grimaldis of ...

whats up with the photo?

To be recycled for the upcoming fnm convention.

The Governor General is the Queen by 'Proxy'. The Queen is the Crown Corporation by proxy. The Crown Corporation owns us, our lands and our Government. It is all very simple and in your face. Our government is simply local government governing on behalf of the crown. Our constitution outlines the powers and rights of the Queen.

... and this is exactly why I am against income tax. The government will always find ways to expand the social welfare net to increase entitlements and create dependence on the government. It is an unsustainable socialist method that will result in economic collapse or devaluation.

What government should be talking about is how it will increase government revenue without adding new taxes on the middle and lower classes to pay for these entitlements WHILE paying down the national debt!!

You know when they are bereft of any real plans. They use the old fall back line of promising to give everyone something free. The fact that they are increasingly welfare and other entitlements is alarming.

What is this THRONE thing all about!? OMG

it does look rather silly, especially as its been removed from its historical halls, where the environment around it had special significance. Its just "there" with nothing....Its like one of those dystopian movies where random objects like "the last book on earth" get elevated significance... unlike the last man, woman, child, or woman able to bear a child on earth of course.

The THRONE thing is our official acknowledgement to our owners - the crown corporation, whom the queen is the face for.

What the hell is this suppose to be???? Speech from the throne???? What throne??? These egomaniacal, self-aggrandized, pompous politicians really need to stop their shit!

its vestiges of the past, tradition, customs handed down from our forefathers. The US president gives a state of the union address, same thing. This spectacle here just looks odd because theyve tried to modernize it and spiff it up by moving it from its dank but historically significant halls/environ over to beautiful Bahamar but it just ended up looking empty and out of place.

What we could really benefit from is some expertise in preserving historical buildings. Maybe we do have a Bahamian here who can do it but as usually makes sense to us, we're victimizing the people with the knowledge and letting the lunch lady who campaigned for us manage the restoration projects.

Go and get a copy of Who Owns the World: The Surprising Truth About Every Piece of Land on the Planet by Kevin Cahill. Make sure your heart pills are nearby when reading it 'cause in fee simple means that you are a tenant on the Queen's land.

Brilliant. Lots of free money for everybody. It mussy be Christmas....

Sounds great! But...how are you gonna pay for it? 🤔

What does Tribanon have to say about this? Please let us hear from you ASAP.

You saying you will drop VAT(even though whispering only for 1 year) and give out increase the money you will give out. This remains to be seen how the Bahamas will survive 5 years of this..