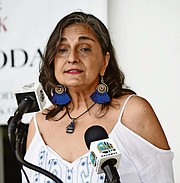 Activists yesterday said Disney’s Lighthouse Point project will be “the first test” for the Davis administration when it comes to “matching words” in Opposition to “actions” when in government.

Sam Duncombe, reEarth’s president and a leading opponent of Disney Cruise Line’s plans for Eleuthera’s southern tip, told Tribune Business that The Bahamas had “no more time” for politicians who failed to translate talk into meaningful action and reform.

“The Prime Minister had some very bold words to say in 2019,” she said, “and we want the words and actions to match otherwise it’s more talk. We don’t have the time for more talk.

“This is their first test, and we hope.... we’re here to help in any way we can.... but the words have to match the actions. We cannot continue to operate as business as usual when we have so many environmental challenges coming our way.

“When Disney’s Heads of Agreement came out [under the former Minnis administration], we were thoroughly impressed by Glenys Hanna Martin’s comments because she showed a real understanding of what we had given away,” Mrs Duncombe added.

“Now it’s time for these very profound words both she and the Prime Minister said about a better deal for The Bahamas from Disney to bear fruit. Right now, they benefit and we get the crumbs off the table. We need to completely alter that scenario, and a land-based project does just that.”

Mrs Duncombe laid out this argument for “heads in beds” in a September 27, 2021, letter to newly-appointed minister of the environment and natural resources, Vaughn Miller. She also reminded him of the contributions by Mr Davis, Mrs Hanna Martin and others when the Progressive Liberal Party (PLP) was in Opposition and had concerns over Disney’s cruise port plan.

Mr Davis, while leader of the Opposition, challenged the transparency of the Disney deal, saying on March 10, 2019: “Hard on the heels of the fake and phoney Oban deal, the prime minister sat in secret and signed the Disney deal.

“No cameras or outsiders were allowed save for the government’s minders and mouthpieces. The public found out by a release from the Bahamas Information Services. The PLP would never have gotten away with this and never tried to.”

Mr Davis said then that questions remained over the environmental impact study; how Bahamians will benefit; and how Lighthouse Point’s landmarks will be protected from ruin by poor developmental practices.

Mrs Hanna Martin, though, went further, blasting just two weeks’ later: “A project which was chosen over a competitor with Bahamian involvement, and which attracted so much controversy and which encompasses perhaps one of the most beautiful spots on earth, should have been diligently negotiated to yield high performing economic opportunity for our people and contained stringent environmental provisions.........

“This is essentially a giveaway to Disney. Further, the reference to Oxford Economics on the economic impact is misleading unless it also factors in the value of the many concessions made from the public purse to Disney, a multi-billion-dollar international corporate entity.

“But, even on the face of it, the sum of $805m projected GDP impact and $357.5m in revenues over a 25-year period is far from spectacular especially when considering the concessions that are being given.”

Even Chester Cooper, now deputy prime minister, got into the act by arguing in relation to Disney’s Lighthouse Point deal that The Bahamas was being “chopped and sold for control” to the interests Sir Lynden Pindling “spent his life keeping at bay”. He added that the Heads of Agreement only left locals with “crumbs”.

Mrs Duncombe, in her letter to Mr Miller, called for a meeting between activists and the Government “to discuss the reconsideration of plans for Lighthouse Point and related major environmental issues”.

“We hope that your ministry will pause the rush to grant environmental approvals for this project, and require Disney to give serious consideration to a better, more equitable alternative, including a Disney Land and Sea Legacy Park,” she wrote.

“For two years, our groups have stood ready to co-operate with Disney to identify a more appropriate alternative site for its cruise port. Disney claims that they are following the same high environmental standards at Lighthouse Point that they would anywhere else in the world. They say they will not proceed with their current plans unless they are ‘environmentally responsible’.

“We hope that your Government will perform much better than the last by holding Disney accountable for these promises.” Mrs Duncombe said more than 450,000 persons had signed the petition opposing the Lighthouse Point project as presently conceived, although she did not say how many were Bahamian.

“From the outset, Disney and its allies have stifled the voices of Bahamians expressing serious concerns about the project,” she asserted to Mr Miller. “We look to your Ministry to assure that both the public’s right to be heard and the environment are protected in the Government’s decision-making process on Lighthouse Point.

“Both Disney and the previous government refused to make public the full data on the economics of the deal. A study conducted by Oxford Economics purportedly proves that the project will benefit the local and national economy. Yet Disney still has not released the full document.

“Lighthouse Point is an important first test of your new Government’s resolve to address the most existential environmental challenges facing our country, most importantly climate change and protection of our marine resources.”

Mrs Duncombe noted that the 18,000 acres of sea surrounding Lighthouse Point have now been declared a Marine Protected Area (MPA) as of July 2021. However, all the concerns appear to neglect the fact that it is Disney which won the race to acquire what was already privately-owned land.

Kim Prunty, Disney Cruise Line’s vice-president of public affairs, told this year’s Eleuthera Business Outlook that the cruise line was hoping to begin operations at Lighthouse Point in the first half of 2024.

She added that while Disney had committed in its Heads of Agreement to supplying 30 percent of the project’s energy needs from renewable sources, it was now targeting a 90 percent threshold as well as “zero waste to the landfill”.

Ms Prunty also said the $355m in extra tax revenue that the development is projected to generate over a 25-year period exceeds that value of the concessions it has received from the Government, although it has provided no figure for the latter. The project is forecast to generate 120 construction jobs, with a minimum 80 percent going to Bahamians, and 150 full-time operational posts