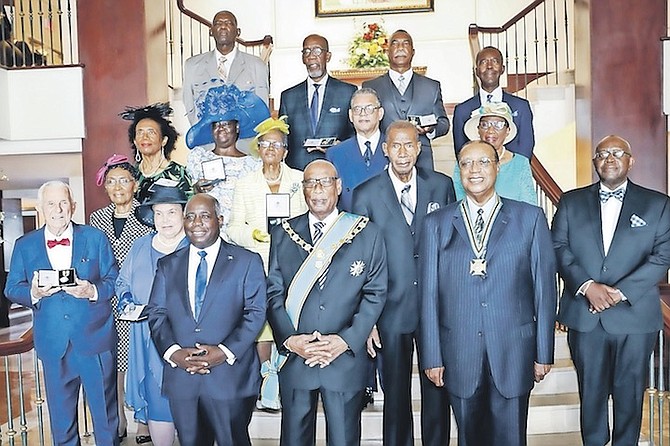 SIXTEEN Bahamians were recognised on National Heroes Day for the vast contributions they made to the development of the country.

At a ceremony at the Hilton yesterday, Governor General Cornelius A Smith conferred honours on 16 outstanding citizens under the Order of the Bahamas; Order of Distinction and Order of Merit award categories.

The recipients of 2021 National Honours were first announced in July. Topping this year’s list was Algernon Allen, who was awarded the Order of The Bahamas under the rank of companion.

Awards for the Order of Merit were issued to Percival Andrew Knowles and Patricia Glinton-Meicholas under the rank of officers, while the late Dr Patricia Bazard, Al Collie, Reverend Copeland Morley, Mother Vivian Cox, Celestine Eneas and Willard Rutherford were given the same award under the members rank.

During the honours ceremony, Prime Minister Philip “Brave” Davis commended the awardees for their “ingenuity, determination and strength” which contributed to the development of the nation.

“This ceremony grants us the opportunity to recognise them for their greatness in all areas of our society,” he said. “Some have made their contributions in politics, law, the civil service and the uniformed branches. Others have served as nurses, educators, community organisers, religious leaders, and in other vital roles.

“Among them, we have the Right Hon. Algernon Allen, recognised for his outstanding service in politics, governance, and philanthropy. We have the first Bahamian Commodore of the Royal Bahamas Defence Force Leon Smith, who demonstrated to the world the excellence we can expect from Bahamian leadership. Eugenia Cartwright (also) served as a public officer for over 40 years...We thank her for dedicating her efforts in keeping the government of the Bahamas up and running.”

Yesterday, Mr Davis also recognised Mary Johnson for dedicating her life to saving others in the nursing sector. He also applauded Robert Sands for helping to build the nation’s tourism industry with his leadership and managerial skills.

“Perceval Knowles is recognised for his leadership in community service and development,” Mr Davis said. “Patricia Meicholas is well-known for her outstanding contribution to literature... We recognise Patricia Bazzard, posthumously, for her service to culture, civics, and the performing arts. Likewise, we also recognise Al Collie for his service and promotion of Bahamian art and culture; The Reverend Copeland Morley and Mother Bishop Vivian Cox, for their service within the community as religious leaders; for his contribution to the development of youth through sports, we recognise Wilford Rutherford.”

Yesterday, Celestine Eneas was also commended for her promotion of Bahamian art and culture, while Captain Patrick Rolle, Agatha Archer and Douglas Hanna were thanked for their respective contributions to the development of the air transportation, education and law enforcement sectors.

“The legacy of our national heroes, both past and present, must never be forgotten,” Mr Davis said. “In marking their contributions, we must ensure that future generations recognise the giants upon whose shoulders we are standing...We are beginning to emerge from one of the most challenging periods in our nation’s history. There are still difficult days ahead. But we are facing them together with a resolve that says to the world: ‘We will thrive, we will overcome’. Making sacrifices and rising above adversity, these are the hallmarks of heroism.”

Mr Davis also urged the public to allow yesterday’s honour ceremony to encourage them to “unleash the hero within.” He said by doing so, the country could ensure that its “collective future was brighter than ever.”

“Can you imagine what riches a partnership of heroes can bestow on the fortunes of our country? Can you imagine what blessings a partnership of heroes can bestow on future generations of Bahamians? Let the national heroes gathered here today, be the inspiration that fuels our determination to make the necessary sacrifices, to rise above adversity, to be our best selves and unleash our personal hero within.”

... why is our country in the state it is in if we have so many "heroes" every year and so many nation builders at funerals?

What can possibly go wrong !

Patricia Meicholas wrote in her book on how to be a true true Bahamian that people were obssesed with beauty contests. True.

But they are more obsessed with receiving honours and awards. Some organizations even required the honoured to sell dinner tickets to raise funds for their own trophies. they used to find 50 liiving legends several years in row, but eventually they ran out of living legends.

I do not need such recognition. When my cat sees me and I pet her, she drools. I am honoured.