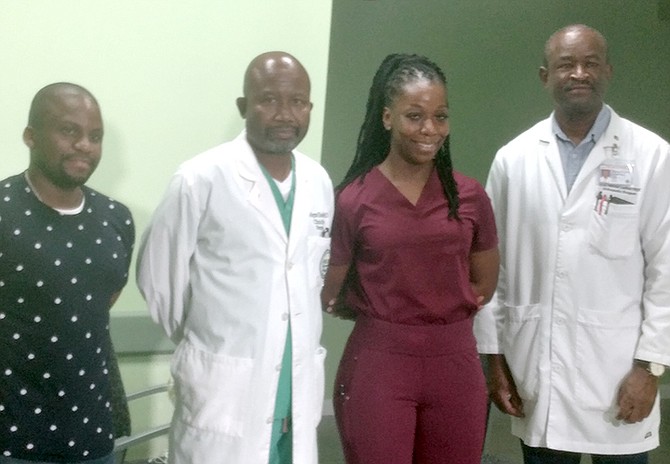 It is the first step for future partnerships, particularly in specialty areas like neurology, between the two sister public institutions.

“This is a major step for the Rand Memorial Hospital and Grand Bahama,” Dr Freeman Lockhart, medical chief of staff at Grand Bahama Health Services, said an hour before the operation.

He indicated that a surgery of this kind had never been done at RMH or in Grand Bahama.

“Professor Dr Magnus Ekedede, a chief neurosurgeon in The Bahamas for 25 years, is down on the invitation from GBHS,” Dr Lockhart said. “It is a programme that has been in the making for some time now. The things that have been happening recently as a result of the pandemic pretty much brought this programme forward.

“There have always been challenges trying to get patients into our sister hospital at PMH for patients of such nature that Dr Magnus was brought down here for.”

The main reason the surgery was done in Freeport, said Dr Lockhart, is because of the limited availability of ICU beds at PMH.

“That has been a major challenge and it is one thing the pandemic has brought to the forefront. Since we have ICU beds available in Grand Bahama but we don’t have the technical skills, one way to get around this (challenge) is to bring the technical skills to Grand Bahama, and that is exactly what is happening here this afternoon.

“What he is going to do is pretty much a major neurosurgery case, and this will be the first of its kind here in Grand Bahama,” Dr Lockhart said.

“So, hopefully, we are setting the stage for procedures of this nature, some of which will be neurosurgery and some other disciplines. For the months and years ahead, hopefully, this is a partnership we can establish with PMH.”

Dr Ekedede performed the surgery in RMH’s newly refurbished state-of-the-art operating room with a medical team of about 10. He said a lot of effort and mobilisation had to happen to get it done.

“It has not been easy, I know what I had to do to mobilise the instruments here,” he said.

“This surgery is the first of its kind here. It does not matter how it goes because we never abandoned the mother. Not because she is 70 (years old) she has to die.

“The patient’s son is very glad that we have not abandoned the mother. It has been really a severe problem. It is a cancer, and we want…to give additional quality life for her,” the surgeon said.

“When I was asked to do this a lot had to be done to move me here, and a lot of effort. But Minister Darville and the prime minister too, they wanted to make it happen because…whatever Nassau people enjoy, Freeport people should enjoy also, and it is the same for Abaco, and the other Family Islands,” he said.

“Because of COVID and the situation, we don’t have many ICU beds disposable for any patient. And this is giving us a lot of problems in terms of service. I know we have been trying to get this kind of an approach down for 25 years, but for one reason or the other it has not fallen in place. And because of COVID, it has to happen because people are drying right, left, and center, and we can’t allow that to happen.”

Dr Ekedede said the Rand still needs a lot of medical instruments for those kinds of operations.

“One thing I am going to do is a fact-finding mission. After the surgery, I am going to write a couple of things they will need to put in place for future cases.

“I am happy to be here. I have been seeing patients from Grand Bahama for 25 years, he said.

“This is the second city with the second-highest population. It is a beautiful place, and over the years a lot of cases have come from Grand Bahama, and I have the statistics. I believe that if we can have something like this, not all cases - no separation of Siamese twins, major aneurysm cases, but this is a major tumor case. If we can do it once in a while, and get more instrumentation and bring it here, I definitely think it is possible.

“There are some people here who are not able to travel either because of their age, income, or resources and we can bring the technology here. And there is no better way to start than now.”

Dr Lockhart said although renovations are completed at the Rand, the hospital is still not yet fully occupied.

“The Rand is back in operation. We are well aware of where the Rand has come from and where we are now,” he said. “Even though we have not 100 percent occupied the renovated facility yet, a lot of clinical areas and spaces have been re-occupied.

“The OR was damaged and devastated and has been refurbished since Dorian with a lot of state-of-the-art equipment. But it is not just the equipment that makes it possible, it is the personnel working - the nurses and technicians who assist the surgeon,” he said.