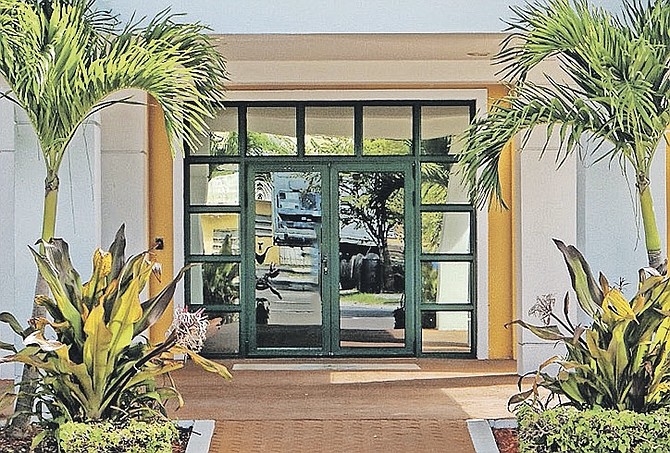 A former Bahamas Agricultural and Industrial Corporation (BAIC) manager has won more than $134,000 after he was fired for allegedly sitting in his vehicle and joining in radio talk shows.

Anthon Thompson, who in February 2018 demanded that former prime minister, Hubert Minnis, intervene over what he slammed as a “travesty” of a termination, was found by the Supreme Court to have been both unfairly and wrongfully dismissed by the government agency.

Justice Diane Stewart, in a September 22 ruling, awarded Mr Thompson $60,122 for wrongful dismissal - a sum equivalent to what BAIC offered when he was terminated. And, on the unfair dismissal, she gave him a “basic” $41,495 plus $32,700 in “compensatory” damages.

The latter sum was awarded on the basis that Mr Thompson’s termination deprived him of a Scotiabank mortgage that would have financed completion of the “executive three-storey duplex townhouse” he was building at the time.

The ex-BAIC manager said he had already paid $5,000 towards an appraisal report, quantity surveyor’s report, engineer’s report and life insurance for the duplex project, and injected $190,000 from his own personal funds into it.

Justice Stewart also noted that Mr Thompson was forced to enter into an interest-only arrangement with Commonwealth Bank because the BAIC termination had left him unable to meet $1,080 in monthly loan payments. She awarded him accrued interest on both the Scotiabank and Commonwealth Bank loans, which made up the majority of the “compensatory” award.

Setting out the background to the dispute, Justice Stewart said Mr Thompson had been employed at BAIC since May 1, 2003, and assigned to its Gladstone Road feed mill from 2016 in the role of senior manager. However, despite earning $47,950 per annum together with a $6,480 annual allowance, he did not have a job description outlining his responsibilities.

Rodney Forbes, Mr Thompson’s now-deceased supervisor, was also unaware of Mr Thompson’s feed mill assignment. “Despite this, he sought to identify the Feed Mill’s weaknesses, strengths, opportunities and threats, and inform his department head of them,” Justice Stewart wrote.

“He did, in fact, compile reports as needed and averred that he was always on-site but would have to sit in his truck to work due to the myriad of physical inadequacies that affected staff, clients and management.

“Some of the inadequacies included insufficient space for staff members and customers on a daily basis, one shared restroom for staff and customers, and that the restroom, kitchen area, cashier station, clerk station and manager’s desk were all contained in a six foot by ten foot area. There was no privacy, and he was unable to conduct any private meetings with management, staff or clients.”

As a result, Mr Thompson “resorted” to sitting in his vehicle during his final few months at BAIC given the absence of seating at the feed mill. “The alternative for him and other staff members was a dilapidated building on the compound where staff often gathered or the production plant floor while feed was produced therein,” Justice Stewart added.

“He maintained that the production plant was inadequate as the air ventilation system and the ceiling fans were not functioning, and there were several deficiencies on the floor of the plant that were hazardous to management.”

“He only called into the radio talk shows during his break or his lunch break, which would be anywhere between 7.30am to 10am for 15 minutes, and between 1pm to 2pm for an hour,” Justice Stewart noted. “The radio was always on during the day in the Feed Mill’s office. He denied that he failed to perform his duties because he would be calling into radio talk shows during the day.”

However, Ms Rhodenwalt sent all BAIC staff an e-mail in September 2017 telling them they were limited to calling into radio talk shows during their lunch hour. And, on December 18, 2017, Mr Thompson received a letter from BAIC’s Board telling him to stop calling the radio shows during work hours, which he felt undermined “his right to freedom of speech”.

The termination letter received on February 1, 2018, came “as a complete shock” given that Mr Thompson had been speaking to BAIC’s human resources department at that time over a three-month vacation leave so he could obtain treatment for a spinal cord injury. He alleged that there had been no prior warnings or concerns raised about his conduct.

However, Mr Sampson, as BAIC’s then-general manager, argued that Mr Thompson was warned in an August 17, 2017, letter about behaviour “amounting to gross misconduct and neglect of duties” due to him sitting in his work vehicle; calling into radio talk shows; arriving late to work; and “abandoning your post for hours” during the day.

Mr Sampson alleged he saw complaints about Mr Thompson from his late supervisor, Mr Forbes, and BAIC’s Board issued a directive to terminate his employment. However, he admitted the feed mill was “in a wanting state” and that plans to upgrade it never happened.

Finding that, as a manager, Mr Thompson was not covered by the industrial agreement involving BAIC line staff, Justice Stewart noted that the agency “did not dispute the working conditions” that forced him to work in his vehicle. And no evidence was produced as to how often he called into radio talk shows to back up the “dereliction of duty assertion”.

While BAIC had “an honest belief” that Mr Thompson was guilty of such conduct, Justice Stewart said the letters given to him were “directives to cease and desist as opposed to invitations to respond”. As a result, the ex-feed mill manager was not given a chance to rebut the allegations against him, which was “in breach of the rules of natural justice” and resulted in unfair dismissal.

“He was not informed that the defendant [BAIC] was minded to dismiss him, and he was subsequently not given an opportunity to present any mitigating factors or contrary evidence to dissuade the defendant from dismissing him,” Justice Stewart ruled. This was also the basis upon which he was found to have been wrongfully dismissed.

However, Justice Stewart declined to order that Mr Thompson be reinstated due to the “breakdown in the working relationship” with BAIC and his lack of a job description.

The Tribune’s archives record Mr Davis and Fred Mitchell, now-minister of foreign affairs, identifying several of the dismissed workers as Progressive Liberal Party (PLP) supporters. While Mr Thompson was not mentioned as such, he was represented in his Supreme Court case by Philip McKenzie, Glenda Roker and Creswell Sturrup.

All three are attorneys at Davis & Co, the now-prime minister’s law firm, although he is no longer active or practicing there. It also appears likely that Mr Sturrup is the former permanent secretary in the Prime Minister’s Office under the Christie administration who has now been recalled by Mr Davis to public service.

Others dismissed from BAIC at the same time as Mr Thompson included Latrae Rahming, former press secretary for Mr Christie. Mr Thompson blasted at the time: “I am being pushed on the unemployment line unfairly and unjustly. This is unacceptable and I say to you, Dr Hubert Minnis, the prime minister of this nation, I am looking forward to you, I am calling on you to correct this wrong.

“This is nonsense. You said it is ‘the people’s time.’ I am a Bahamian so I am a part of the people and I am calling on you, sir, as prime minister of this country, to call in to account BAIC’s executive board, BAIC’s chairman Michael Foulkes, BAIC’s general manager and all persons who had a hand in this nasty thing that happened to me today (Friday).”

'Justice' Diane Stewart should forthwith be made to disrobe and retire from the court system without pension and health benefits.

Is this the same guy who is always on the radio during the day? How do you work a job and call every radio station multiple times a day?

Easily. My radio is always on between 10-2. Not only am I doing work between 9-5. Im frequently working between 5 and 12. Some people like to walk outside and have a cigarette on their break. Others call talk shows. This 1950's clocking in is not the key to productivity. Give people some achievable objectives, establish reasonable check in points. Noine has to "see" you working for you to produce something ...unless you working fast food

Hmm all sounds good, however it is pretty magical that he can get on air so quickly when he calls, every day all day long

not magical at all. Its the new management style. You dont have to account for every second someone is on the job. Thats micromanagement and its highly annoying. Youre interested in what they produce. Its quiet at 2AM in the morning, no phone calls no emails.

As to getting on the air that's a function of the cell system. Its not like he's on for a full hour or ths2t nobody else calls in. Also not every show is in demand for callers. he's just more involved than most. From what I hear from him he seems to think logically on most occasions. He does have his sycophantic episides now and then

II have never seen a warning letter where an employee was given a chance to rebut. In fact, many times folks are accused because the manager is covering for his own mistakes.

That is why I do not call talk shows. Too easy to get caught. On occasion, I send texts because I have to send texts on the job so no one knows any better.

Believe me, no one counts when you answer calls and emails in your private time. No one.

You have been lucky so far.

If anton is the manager is he not responsible for the condition of the building, the broken fans? Is it not his job as manager to get everything running in tip top conditoin and not listening to and calling into Juan's show? ah the sillyness