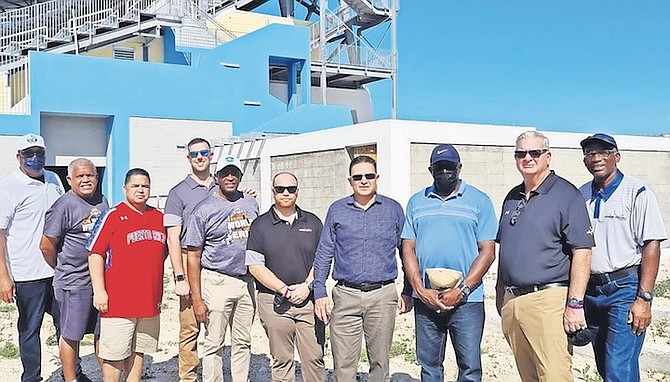 WITH the assurance from Prime Minister Philip “Brave” Davis that the new national baseball stadium will be completed in time, Babe Ruth Caribbean Region Commissioner Greg Burrows Sr confirmed that all systems are go for The Bahamas hosting the inaugural Babe Ruth Region Caribbean Championship and International Baseball Tournament.

Scheduled for July 7-11, 2022, the championships will feature the under-12 division with about 10-12 teams participating in the Babe Ruth Region Caribbean Championship and ten teams in the 15-and-under division for the International Baseball Tournament.

Burrows revealed following a series of meetings in person and virtual, courtesy calls and inspection of the new stadium over the weekend that there are about 4-5 countries who are expected to field a team in both divisions, including the Bahamas, Curacao, US Virgin Islands, Mexico and Puerto Rico.

A number of Babe Ruth Caribbean Region executive, including the vice president and national commissioner, as well as the director for the World Series of Babe Ruth and representatives from Mexico and Puerto Rico were in town to meet with Burrows and his executives as well as the Bahamas Baseball Association as they discussed the way forward to Davis and Minister of Youth, Sports and Culture Mario Bowleg.

Over the weekend, the first Caribbean Zone Championships meeting took place via zoom with representation from Jamaica, Aruba, Bonaire, Antigua and Barbuda, St Martin and the Bahamas to deal with the logistics of the tournament coming here.

“The Prime Minister expressed high interest in the Caribbean Championships and he charged us to get ready for the championships because he want to use it as the official opening of the new stadium,” Burrows stated.

During a visit to the South Beach Swim Complex on Friday, Bowleg stated to the members of the press that his ministry is doing a full investigation on why Woslee Construction has ceased work on the stadium over the past few weeks.

“No work has been done to the Andre Rodgers Stadium (new baseball stadium),” Bowleg said. “We’ve spoken to the contractor, myself, along with the Minister of Works (Alfred Sears) and we will be meeting soon with his PS (Permanent Secretary) and mine to see how we can pay the outstanding arrears that is due to the contractor and once that is done, hopefully he will get back on track and getting the work completed. 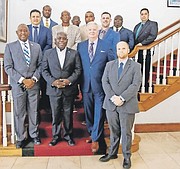 “It’s not a hope, That will happen and we want to make sure that the facility is completed in the quickest time possible.”

Originally, construction on the stadium began in August 2016 and was to be completed by November 2017. The actual cost for the construction is still unknown as the price tag continued to increase with each delay and stoppage since the work commenced.

Whenever it is completed, the stadium is expected to have a seating capacity of 4,500 for baseball games, but could swell to 8-9,000 for concerts and other events. It will also include 17,000 square feet of office space.

On their visit to the stadium, Burrows said they were assured by the contractors that once they get everything they need,” the timeline is no problem, so Burrows said they are going full stream ahead with planning the championships.

“I no plans of making any contingency plans for the championships,” Burrows stated. “We will have the stadium ready. My plan is to have a second supporting field ready also. That is quicker to build tan the national stadium. We also want to redo the Baillou Hills playing field for the 12-and-under division.”

Based on what transpired from their series of meetings and visitation to the new stadium, Burrows said he’s eager to continue the preparation for the Babe Ruth Caribbean Region Championships next year.

With The Bahamas hosting the event, Burrows said the management staff for the two local teams are also looking at the potential available to represent the country., He noted that while Greg Burrows Jr will be in charge of the 15-and-under team, Clarence McKenzie will have the reasonability for the under-12 team.

Both managers will have their coaching staff, who will collectively select the “best players” in both divisions to represent the country. Burrows Sr said it’s expected that players will come from New Providence and Grand Bahama. If there are players eligible on the3 Family Island, they will be considered for team selection.