Strachan Shines In Breakout Game For The Golden Rams 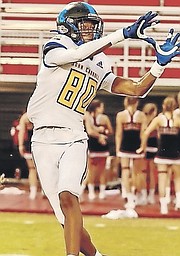 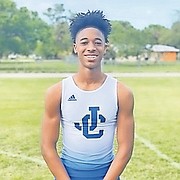 PRINCE Strachan had a breakout game of the season on senior night for his John Carroll High School Golden Rams.

The senior wide receiver finished with Eight receptions for 100 yards and three touchdowns in his Golden Rams’ 21-19 loss to Orlando Christian Prep.

Through four games this far he has totaled 20 receptions for 349 yards and three touchdowns.

The Golden Rams had a delayed start to the season and have also missed the previous two weeks due to several scheduling issues which have included whether delays and cancellations due to COVID-19 protocol.

On opening day, Strachan led his offense with eight catches for 158 yards in his team’s 27-9 win over Calvary Christian.

He also had three receptions for 61 yards in his team’s 20-0 win over the South Fork Bulldogs in week four.

The 17-year-old dual sport athlete who also runs the 400m, emerged as a star on the gridiron for the Golden Rams as a junior. He has already also garnered several additional NCAA offers this offseason including Lenoir Rhyne, St. Thomas, and Notre Dame College. Strachan has previously received an offer from the Charleston Golden Eagles and has also drawn interest from the Coastal Carolina Chanticleers.

The younger brother of Indianapolis Colts wide receiver, Mike Strachan, Prince said he hopes to follow in his brother’s footsteps en route to a collegiate and professional career.

It’s a great experience, it’s a dream come true,” he said of watching his older brother suit up in the NFL.

The younger Strachan was recently named to the ESPN West Palm Top 63 List for the class of 2021, has picked up several NCAA offers at various levels and alongside Mike, had an opportunity to workout with Colts quarterback Carson Wentz in the offseason.

Last season, he finished with a team-leading 33 receptions for 633 yards and eight touchdowns last year. His yardage and touchdown totals were second on the team. He also averaged 18.6 yards per catch and 57.5 receiving yards per game.