Face To Face: A Family Living Up To The Legacy Of A Legend 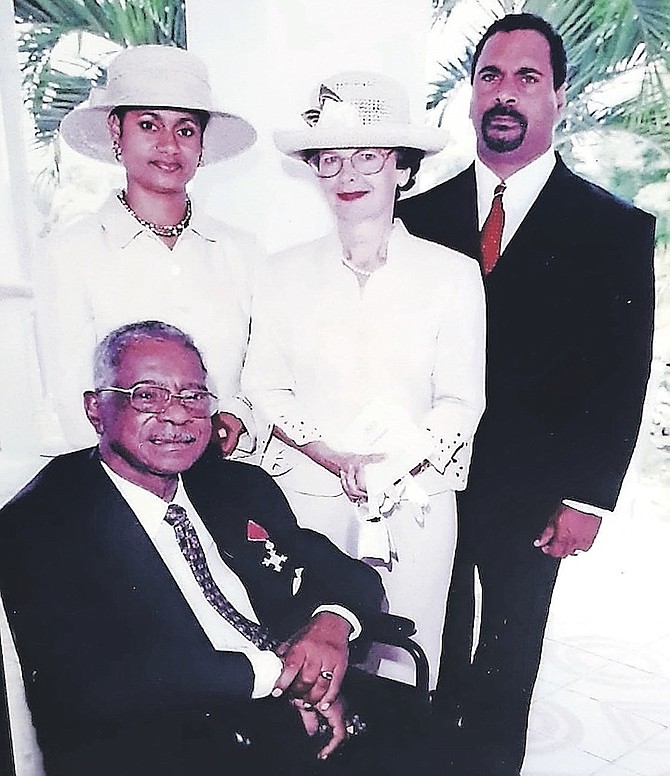 WHEN a giant of a man leaves the imprint of his footstep on this Earth, it can be seen for generations to come.

That is why the family of E Pedro Roberts II continues to honour his legacy long after his passing.

He is known as the Father of Pharmacy in the Bahamas. His work to revolutionise the pharmacy department of the Princess Margaret Hospital can still be seen today. Many professional pharmacists in this country blossomed from under his wings.

His son, E Pedro Roberts III, is still successfully leading the group of companies he founded. Both of these men stand on the broad shoulders of Enoch Pedro Roberts I, nation builder, educator, craftsman and mentor to many. It is this kind of generational legacy that helps to weave the fabric of a strong nation.

I have known Enoch Pedro Roberts III, better known as Pedro, for many years. What I did not know was that getting to know him would actually turn out to be a family affair. His loving mother, Jacqueline Ann Roberts (nee McCollough) is such a gem. His sister, Anna Maria “Mimi” Roberts is a well-known and trusted pharmacist like her father; and she is one of my most trusted friends. E Pedro Roberts II has six grandchildren, and they are all respectful and intelligent, a trait that runs through the entire family.

In all my years of journaling the lives of Bahamians, I have yet to find a family like that of EP Roberts I. You may recognise his name, as there is a primary school named after him in New Providence. He and his wife Gladys Raine Roberts (nee Archer), both from Abaco, were parents to seven children: Dorothy Wisdom (nee Roberts); Gerald Roberts; Sylvia Johnson (nee Roberts); Father Anthony Roberts; E Pedro Roberts II; Dr. Patrick Roberts; and the only surviving child, Rosemund Roberts Williams.

From these children came many great descendants, all involved in nation building, including: Italia Johnson, first female Speaker of the House of Assembly; Senator Gladys Johnson-Sands; Attorney Kathleen Hassan; former Ministers of Youth, Sports and Culture Neville Wisdom and Daniel Johnson; Oscar Johnson; educator Cora Cooper; Hollis Roberts Delancy, a recent Face to Face feature, and many others. These are just a few that I know personally. It speaks to how strong and broad this legacy is and it is for this reason, as the family celebrates what would have been the 85th birthday of E Pedro Roberts II this week, I join them in honoring him.

When Enoch, originally from Green Turtle Cay, and Gladys Raine, originally from Marsh Harbour, moved to New Providence, they had high hopes of giving their children a good education in order to establish for them a good foundation for life. As an educator, Enoch wanted to make sure his children could go even further than he did.

Through a scholarship opportunity, the gifted young Enoch was able to go off to Tuskegee Institute (now University) and obtain a degree, a highly commendable achievement back in 1936. Trained in biology, chemistry and woodwork, he came back and worked throughout the Family Islands, imparting his knowledge and molding young people to do the same.

Later on in life, having his own children, he began to sow into them the seeds of good moral standards and intellect that he hoped would take them around the world. It came to fruition.

In the case of EP Roberts II, he developed a keen interest in science, inspired by his father. EP Senior guided his son into the technical schools and in 1952, EP Junior became a pupil science teacher under Robert Cunningham, a native of Scotland working under contract with the Board of Education. Pedro Jr attended Continuing Education Evening Schools at both Western Junior School under Carlton Francis, and Eastern Senior School under Donald Davis (both for whom schools have been named). He successfully completed several GCE examinations before graduating from high school.

Pedro Jr then joined the British Caribbean Meteorological Service, where he served a brief stint as an Assistant Meteorologist. He then applied and was accepted into the prestigious Temple University’s School of Pharmacy Programme in Philadelphia, Pennsylvania in 1957. During his studies at Temple, Pedro Jr spent three years at Hampton’s Pharmacy and Gumbs’ Pharmacy in retail practice and at Mercy Douglas Hospital and Temple University Hospital in hospital pharmacy and pharmacy administration. The late Francis Nicholas, Chief Pharmacist of Mercy Douglas Hospital played a major role in his hospital practice.

In 1961, Pedro Jr graduated from Temple University with a Bachelor of Science degree in Pharmacy and continued to practice in both Mercy Douglas Hospital pharmacy during the day and Hampton’s Pharmacy in the evening. In January 1962, after the Government of the Bahamas established the post of Senior Pharmacist in the healthcare system, he returned to The Bahamas and worked at The Princess Margaret Hospital (PMH) in Nassau. This was a proud moment in healthcare history, to have a Bahamian qualified to take such a senior post in pharmacy, and to perform so well.

While working at PMH as Senior Pharmacist, Pedro Jr took courses in Clinical Pharmacy at Mercy Douglas Hospital, Long Island, New York and Nassau County Hospital, New York. When G Bert Strachan retired, Pedro Jr was promoted to the post of Chief Pharmacist, a position he held until his retirement from the public service in 1987. In 1969, he acted for a short period as PMH Hospital Administrator and from 1984 to 1987, he acted as Director of Materials Management, Bahamas Ministry of Health. It was said that doctors in the hospital considered him their equal in intellect, and treated him as such.

He taught Pharmacology and Drug Dosage from Application at the Bahamas School of Nursing for almost his entire tenure at PMH. He also lectured pharmacy apprentices in pharmacology, pharmaceuticals and clinical pharmacology. Because of this, many pharmacists in active practice in The Bahamas today have been taught, mentores and inspired by him.

Not only did he selflessly offer his time and skills in the public service. He also had bigger dreams of his own. He founded Commonwealth Drugs and Medical Supplies. Today, known as CDM Group, this company spans a wide range of services. The CDM ethical department supplies medication to the hospital and pharmacies all over the country. Over the counter drugs and other associated products are also sold from the offices on East Street South.

The beauty division is a well known sole distributor of a number of trusted beauty brands including Black Opal, Alfa Parf, ORS, Kiss and many others. CDM also has under its wing Sparkle Laundromat, with locations on East St South and Blue Hill Road South. For Pedro III, keeping his father’s legacy alive is important. He continues to make his staff aware that the achievements of today are all thanks to the vision and hard work of his father – a trailblazer in pharmacy and healthcare in his time.

I spoke to his “Aunt Rosie” , the only surviving child of EP Roberts I, who called him a “wonderful human being”. She recalls that her brother was accident prone as a boy, likely getting into all the antics that give little boys their knee scuffs and body bruises. But she said he was an excellent student who applied himself. She pointed out that in addition to his national service, her brother served on the International Association of Pharmacists for many years, and was its president at one time.

She said that he was the President of the Caribbean Association of pharmacists for many years. This not only afforded him the opportunity to travel all over the world, she said, but it also caused him to become a mentor to young pharmacists from many countries, who would call on him for advice and encouragement.

Her daughter Donna called her Uncle Pedro ‘the family philanthropist”. She said that he was like the “glue that kept their family together”. He would always gather the family for special occasions.

In addition, she says he helped as many family members as he could with their tertiary educational pursuits. This, she said, is hard to find in today’s world – a family member who would go out of their way to assist everyone in the family that he possibly could.

To show just how important education was to him, Donna pointed out that he worked as a packing boy for many years to save for his college education. While in college, she said, he worked straight through that time to sustain himself.

His nephew Neville Wisdom calls him “a Bahamian legend”.

“A man of many talents, his academic and professional accomplishments are well known,” Neville said.

“But he was also outstanding in teaching, sports, business, politics, agriculture and Family Island development. These were all areas that interested him. His family was important to him, however, his love for his God, and his service to mankind, distinguished him as a true Bahamian humanitarian.”

Pedro Jr was a founding member of St Michael’s Methodist Church in New Providence. His Methodist family still holds his memories there. I remember when Mimi invited me to attend a service. Rev Dr Philip A Stubbs delivered a phenomenal sermon that touched many hearts in church that day. I saw the love which they have for her father and for his family, and it speaks to his spiritual integrity as well.

The measure of a man is also in his ability to pass on his skills to the next generation.

Proof that Pedro Jr did this lies in one of his mentees, Vivienne Lockhart, who became Chief Pharmacist after he retired. She went on to become the Director of the Bahamas National Drug Agency, Public Hospitals Authority.

“EP Roberts was a true advocate for the advancement of the pharmacy profession in The Bahamas and the wider Caribbean community,” she said.

“His involvement in the establishment of their professional associations and his zeal for improvements in the legislation framework for pharmacy spoke volumes of his desire for improvement for the profession. The results of his mentorship is quite evident in the success of many individuals who sought his guidance before and after venturing into this noble profession – Pharmacy. As a former colleague, I’m proud to be a product of his mentorship. His words of wisdom and encouragement are etched within and continue to be the guiding force with each step taken. He lives on!”

The accolades given in your article were well deserved. Pedro was a Bahamian Patriot to the core, and one of the kindest, most intelligent persons, I had the privilege of being friends with. It is admirable that his family continue to carry on his legacy. God bless them all.