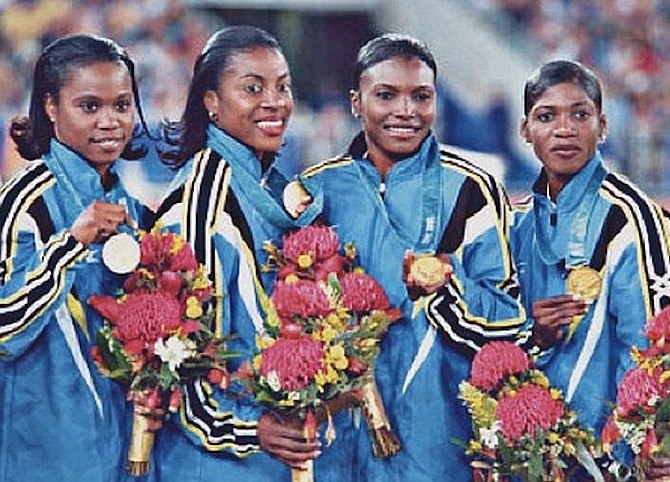 THE WINNING Bahamas team in the 2000 Sydney Olympics.

THE Golden Girls’ troubles with government gifted land have been dragging on since 2002, according to Olympian Pauline Davis-Thompson, who described the situation as a “secret” kept under wraps to avoid embarrassing the government.

“We didn’t want the rest of the world to know,” the 2000 Sydney Olympics gold medalist told The Tribune during an emotional interview yesterday, adding meetings were held and letters sent to “every imaginable” official.

She and her former teammates Savatheda Fynes, Chandra Sturrup, Debbie Ferguson-McKenzie and Eldece Clarke have never been able to access their Tropical Gardens properties nor have they been able to get the go-ahead for the placement of infrastructure. They received their grants on June 27, 2002.

The government at the time, she said, gave assurances that a road would be cut and the needed utilities put in place.

However, for nearly 20 years there has been no movement.

The Golden Girls came out yesterday in support of Ramon Miller, 2012 Olympic gold medalist, the day after he told The Tribune in an exclusive interview that he’s been in a years-long battle for the installation of lamp poles and water facilities for his Tropical Gardens home.

Mr Miller was given the property by the government in 2014 and said he was elated to receive the gift to build a dream home for his wife and children. The home was completed in 2018. Despite following all of the correct procedures and seeking to have lamp poles for electricity and water infrastructure placed, Mr Miller said there has been “roadblock after roadblock.”

Yesterday, former Prime Minister Perry Christie, who was the nation’s leader from 2002-2007 and 2012-2017, said while in office he gave instructions for the area where the parcels of land are located to be remediated.

Given the fact that those instructions were never followed, Mr Christie summed it up to a “failure by the system”. The former prime minister said he would speak to Prime Minister Philip “Brave” Davis with a view to correcting the situation.

“The land was given by the government to persons who represented The Bahamas at the highest level,” Mr Christie said when The Tribune contacted him yesterday.

“The intention at all times was to make the land liveable and to the extent that it has not been done represents a failure by the system because I am satisfied that it was the intention of all of us who had the responsibility to ensure that they had a liveable experience in receiving the land.”

He continued: “I recently saw Pauline Thompson who was so incredibly despondent about the reality of not being able to access her land and acknowledging that at least Ramon was able to build, but they are not able to even do that.

“I know that in my time I met with Ramon, and I thought I had given directions to remediate the situation on behalf of those persons who received the grants from the government with a view to being able to take advantage of the land granted to them.

“My final point would be that I finished speaking with someone who brought this to my attention and I told them I would make it a point to speak to the current prime minister with a view to his taking the appropriate steps to bring a final positive resolution to what was an honourable intention in granting the land that is in full recognition of the extraordinary success at the highest level in athletics of young persons who were deserving of the grant.

“Therefore, every effort ought to be made now to rectify what has been as we now see a failure to deliver what was promised,” Mr Christie said.

Mrs Davis-Thompson said this situation should have never been the case for athletes who worked hard to bring their beloved country recognition.

“My heart is heavy and pretty much we didn’t want to embarrass the government,” Mrs Davis-Thompson said. “We didn’t want the rest of the world to know. We brag and say we are Bahamians, but that was a big secret that was being kept. We never wanted this stuff to go international.

“We tried to go behind the scenes and talk and agitate to every imaginable person because we didn’t want this to be public. We are thankful to the Bahamian people for giving us this gift, but it’s one that we have no access to.

“I am afraid that one of us will close our eyes and never be able to use that property. It will then be one of our family members who will benefit, but we are the ones that did the work.

“Other countries give their athletes the keys to the house and car and say ‘you don’t ever have to work again,’ and this is how you treat your top athletes?”

As it remains unclear why infrastructure was never installed, attempts to secure comments from other officials for a second day were unsuccessful.

However, The Tribune understands that Minister of Youth Sports and Culture Mario Bowleg has said he and Minister of Works Alfred Sears are putting together a Cabinet paper to get the ball rolling for the placement of infrastructure in the Olympians’ community.

The Tribune was told that both ministers were made aware of the situation over the weekend when Mr Miller spoke to Mr Sears who then called Mr Bowleg. They then committed to begin the process.

The Tribune also understands that under the previous Minnis administration, former Works Minister Desmond Bannister spearheaded the completion of a Cabinet paper on the infrastructure issue, which was approved.

However, following the recent general election, the Cabinet paper was said to have been misplaced, a source said.

As a result, a new document was drafted.

Meanwhile COVID is raging in our country and this somehow is a priority......

Just another day in Bahama Land, where citizens are disrespected, marginalized and taken for granted. In a system that patronizes a culture of corruption, incompetency and outright self-hating bias, that sees anything Bahamian as not deserving or something to detest. How long must we hear from public servants "not now, ain't ready and come back? How many emails go unanswered, phone calls not returned or files lost. At the same time, they are serving privileged people with tenacity and vigour seeking only to benefit financially from a paid employment service-caring nothing for the damage incurred through their selfish, careless actions. Just another day in Bahama Land, where a few benefits and if you are Black, go back.

However, the file pertaining to the lands has since 2002 been bouncing about the corridors of the office of the premierships under governances. Perry Gladstone and his former law partner Papa Hubert, Minnis and now done full circle having landed on the desk "Brave" Davis.
Even the Commish The Colony's Royal Constabulary, completely gave up on locating the so-called gone missing now into its fourth year, OBAN file.
Comrades, this is all involving the office of the premierships', not made up fiction, — Yes?