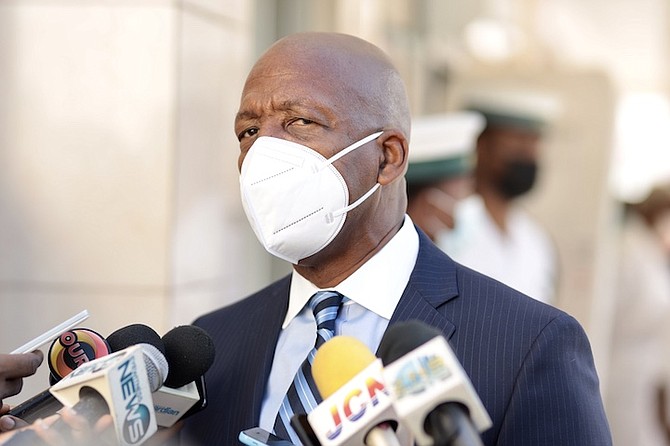 PUBLIC Works Minister Alfred Sears said yesterday he will prepare a Cabinet paper to address funding for the placement of infrastructure on land granted to the country’s Olympians.

After Olympians Ramon Miller and Pauline Davis-Thompson told The Tribune they’ve been battling for years to have electricity and water infrastructure installed on land gifted to them for winning Olympic medals, Mr Sears said it was the government’s responsibility as the developer to ensure there was remediation.

Meanwhile, Whitney Heastie, Bahamas Power and Light’s chief executive officer, explained that the power provider does not provide authorisation to place poles and electricity systems in an area.

THE PROPERTY belonging to Ramon Miller which has not had infrastructure upgrades in the area carried out. Photo: Racardo Thomas/Tribune Staff

Mr Heastie said he was trying to ascertain if all of the required permissions were in place. However, at this point he said it appeared those permissions were not granted, and the matter was “tied up” in government.

“I was briefed on this matter two weeks ago,” Mr Sears said yesterday before Cabinet’s weekly meeting. “I subsequently had a conversation with the mother of Mr Ramon Miller and also with someone else and on Friday I received a correspondence.

“First of all, let me say that the architects, the engineers, (and) the civil section at the Ministry of Works, they have this as a project and I will be taking the proposal for funding. That is the issue, the issue is funding.

“In consultation with my colleagues—that is youth, sports and culture (and) housing—and make an application so that this long-standing problem could be solved, but with respect to the Golden Girls as well as the case with Mr Miller.”

For his part, Mr Bowleg said he empathised with the athletes and fully supported them.

“It’s been a long time as a county. These athletes have gone out there and supported us and made us look good on the world stage and we have been able to reward them with a property by now we should have had the infrastructure in,” Mr Bowleg said yesterday.

“However, we are a new administration, and we have made the decision to move forward and assist these athletes and we are going to do whatever it takes to make sure the infrastructure is in in a timely manner.”

Mr Bowleg said the issue did not reflect that the country was not appreciative of the Olympians.

“I just think it’s a matter of us moving in a timely manner. I think the athletes know that infrastructure was not there for some time now and so with Ramon making the first initiative to go and commence building and understanding that he would have pleaded to both governments before to get the infrastructure.

“I think they dropped the ball. We just have to pick up the ball and get it sorted out.”

For his part, Mr Heastie said he was unsure if the approvals outside of BPL’s control were ever granted.

“There are so many situations that warrant BPL not being cleared to provide,” the CEO told The Tribune. “I think a lot of folks don’t understand that BPL does not provide authorisation to provide power.

“First of all, we need to have an approved document from the Ministry of Works to go ahead and provide power. The second thing is when that approval is granted, the approval must include all rights to the property.

“In other words, BPL cannot just go in and put poles and infrastructure that they don’t know who the owner is because BPL is liable to be sued for putting infrastructure on somebody else’s property.”

He continued: “So, what I was trying to ascertain yesterday is have all of these permissions been cleared so that BPL can go ahead and move forward with providing the infrastructure and the power to the residents.

“It has never been clear whether or not those approvals, which is outside of BPL’s control, have been granted and so what we are doing is I have asked our department that is responsible for making sure all of that is in place to reach out to the homeowner and to ascertain the documents that would grant BPL the rights to move forward.

“At this point it appears to me that those approvals have not been granted and it’s tied up inside the government of The Bahamas,” Mr Heastie also said.

When his attention was drawn to the fact that Mr Miller has all ownership papers to the land, Mr Heastie said BPL was more concerned with this being an off the grid scenario. The company also has to look at who owns the right of way to get to the property.

“This is the challenge. He may have deeds to the land. We are less concerned about the deeds to the land that he has. He is off the main grid and BPL has to now install poles and power systems to get to the residence and so the question there is the right of way to get to his property. Who owns the right of way and does BPL have authorisation to plant poles because it may be on somebody else’s property.

“I think that’s where we are, but we are trying to find out ourselves because I think it’s a lack of approvals from the government on where the infrastructure that BPL needs to put in should go,” Mr Heastie said.

And the athlete gift row will of course be Sears' top priority notwithstanding everything else of such great importance on his plate that he should be devoting his immediate attention to as minister of works. What a joke this guy has become.

wish you had moved this fast when my " common mother " had to purchase a transformer for the area and was not reimbursed for it. Politics is a brute. Politicians cherry pick for their own glory. So, for me, the country does not work, for the Olympians making publicity, the government works.

And there are options: Maybe government should stick to giving athletes just cash awards and/or positions in government. Or set aside properties in a special subdivision with infrastructure already in place for these type awards or allow the awardees to choose properties in existing subdivisions that already have infrastructure. To give awards or make promises of such awards that never materialize or not in a timely manner is a national disgrace.

Why do citizens have to pay in the first place to get service? Isn't that why BPL exists, to provide electricity? They make their return on investment over the lifetime of the property owner. Why should the first person in have to absorb cost of providing basic infrastructure? I know a fella what paid $30k to get service and everyone after him got free power and he got nothing back.. gangsters..