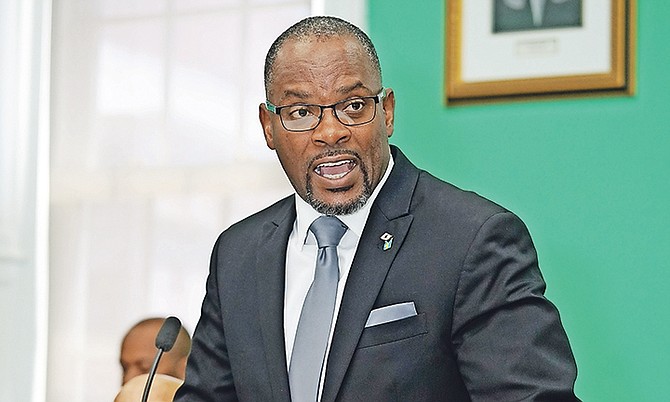 FORMER Minister of Disaster Preparedness, Management and Reconstruction Iram Lewis, the member of Parliament for Central Grand Bahama, announced yesterday that he is running for leader of the Free National Movement.

Mr Lewis is the first person to publicly declare his intention to seek the FNM’s leadership role. A press release from his campaign said “it’s time for a change”.

The FNM will hold a one-day convention to settle the leadership issue on November 27.

The campaign press release said: “Some 50 years ago a proud political movement, the Free National Movement, was established at Jimmy Shepherd’s house on Spring Hills Farms in Fox Hill on October 20, 1971. The ‘Dissident Eight’ led by Sir Cecil Wallace Whitfield and proud Free Fighters, established a movement whose philosophy is based fundamentally on transparency, good governance, equality, a belief in our youth and a strong belief in democratic principles.

“Today, we value Sir Cecil Wallace-Whitfield, Kendal G L Isaacs, Hubert Ingraham, Tommy Turnquest and Hubert Minnis; also John Henry Bostwick. We salute every Freedom Fighter who stood firm notwithstanding the victimisation and persecution for daring to be called FNMs, who were bolded through those early and sometimes very painful, but hopeful days.

“Today, we have a new cadre of Freedom Fighters who believe in our foundational philosophy. Today, we have many FNMs throughout our beautiful archipelago that yearn for recommitment to that philosophy. They desire for a more inclusive, re-engineered, revamped (party) and to be reconnected to our political movement that values all people. The decision of so many FNMs to decide to not vote for us on September 16, in spite of our productivity, sends a clear and powerful message to our organisation.”

The statement said Mr Lewis believes he is the best option for leader, citing his “style of being a servant leader, willingness to listen” and willingness to include dissenting opinions.

Yesterday, Mr Lewis told reporters he believes he has support within the party for his leadership bid.

Joke and Joker of the Day! LMAO

No. Saying youre a servant leader, being a great person, representing the country well in sports, serving as an MP with no contribution of note, winning a safe FNM seat in 2021 are not criteria for leadership

The last self-professed servant leader I came across victimized a great many.

When the pandemic hit only her posse kept jobs.

thats a good one

I remember someone telling me after Travis won and being quite serious, "I could do that, all I need is a suit". The said part is they were probably correct!

Is this being done to split the votes and help guarantee a victory for Minnis. OMG!!!! FNM is in free fall!!!!

This is great news. He will make an excellent Opposition Leader when Lincoln is PM. Looking forward to it.

Lincoln is one big joke right now in this country!!

He always was and always will be.

What is wrong with him running? The more, the merrier. Only one will win. So be it.

Disgraced Minnis wants a very divided FNM delegate vote that he and Culmer can better control for the purpose of ensuring their own desired loyal tool becomes the leader of the opposition. King Cobra Minnis will then lay low in the grass as he and Culmer continue to control the FNM party until the time is right for Minnis to rear his ugly head, spit venom at those who oppose him and strike a deadly blow to fully reclaim leadership of the FNM party in the eyes of the public. And this game plan of the power-crazed megalomaniacal tyrant Minnis must not be allowed to be played out under any circumstance.