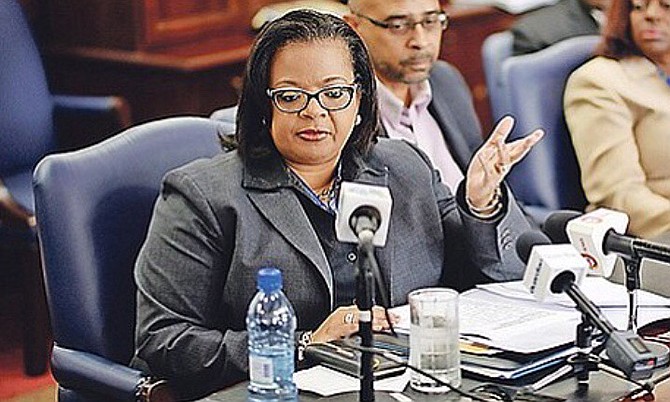 In 2018, at the height of the controversy over the disintegration of BPL’s board, Mr Bannister told reporters he intervened in the management of BPL after learning the institution covered makeup and home security system bills for Mrs Osborne.

His allegation forms part of the lawsuit Mrs Osborne has filed against the government as she seeks payment related to defamation and wrongful dismissal claims.

The men – all allies of Mr Bannister during the board saga – told investigators claims in the media about Mrs Osborne’s makeup and home security services were misleading; they dismissed the significance of Mrs Osborne’s actions in these areas, well-placed sources said.

Mrs Osborne has long said the makeup bill BPL covered was directly related to public relations activities for the institution and that the home security system the company paid for was approved by BPL’s board after Mr Rollins shared a story with her about a retaliation attempt by a former staff member.

Sources said the FTI report largely corroborates her position on these matters.

Mrs Osborne’s former lawyer in her case, Alfred Sears, previously indicated to the press that he would seek $80,000 from the government for her over the defamation issue.

It is not clear whether investigators provided a definitive view or took a side on the other matters related to the board’s breakdown. Sources told The Tribune the report’s review largely reflects what the press has reported about how the board grew dysfunctional over time and ultimately disintegrated into two factions amid disagreements over the Shell deal, the roles of various senior members and Mr Bannister’s treatment of the various players. Otherwise, the report mostly focuses on BPL’s procurement policies and practices and takes a critical view of these.

Clint Watson, the press secretary in the Office of the Prime Minister, teased details about the report during a press conference yesterday.

“The former prime minister in office commissioned an investigation into Bahamas Power & Light, the board, the initial board that was led by then chairman Darnell Osborne,” he said. “We’ve not heard from that report. We can confirm today that a report was done by a foreign company. The name of that company we’re going to release to you as well and I think you might be happy to know that we do have this report in hand.

“It is a very interesting read and of course it’s now been sent to the minister responsible for BPL, the Minister of Works Alfred Sears for his review on it. It’s interesting, you want to read this and it may share a very clear picture as to why we never heard about this report which was presented in November of last year to the government. It explains a lot, I’ll say it and leave it as that.”

In April 2019, Dr Minnis told reporters he signed a contract with an international firm to probe the BPL board matter. His administration released no further details about the probe despite questions from the press.

“I learnt of the existence of a report after the press conference (yesterday) and I started receiving international and local texts about it,” Mrs Osborne told The Tribune yesterday. “I was not aware of any report and nobody interviewed me and none of the other board directors who were removed.”

Former Attorney General Carl Bethel said in 2019 that his office would pay a private firm, Rolle & Rolle, to represent Mr Bannister’s interests in the case.

It is not clear if Attorney General Ryan Pinder will continue Mr Bethel’s course of action in the matter. Mr Pinder told The Tribune earlier this week that he will not speak to the matter because it is presently before the courts.

A hearing in the matter took place last week.

According to documents obtained by The Tribune, Supreme Court Justice Indra Charles has issued an interlocutory judgment in favour of the plaintiffs.

The plaintiffs had failed to file and serve their list of documents by May 31, 2021. The court had directed that if either party failed to adhere to an order to file the relevant documents by this date, their statement of claim or defence would stand dismissed with costs.

Plaintiffs sought relief from these sanctions. Justice Charles has ruled that she is satisfied that they had a good explanation for not filing and serving their documents at the agreed date.

“The plaintiffs have satisfied the court that their failure to comply with the order was not intentional and was due to the fact that lead counsel had to travel out of the jurisdiction to attend his brother’s funeral and also to seek medical attention,” she wrote. “The court also considered that the plaintiffs have generally complied with other orders of the court.”

it didnt say much...certainly nothing that would have you characterize it as an interesting read. Unless this is just an account of whats in the media already

If the Works Minister is the same attorney that represented her in the lawsuit, he should not be allowed to make any decisions on this matter, as it will be a 'conflict of interest'. Despite the fact that he is not currently practicing as an attorney due to his ministerial role, he is still the 'same person' who was in fact paid privately to represent her before his new ministerial post.

A most astute point. Thanks.

We will see how this one turns out!! Just like Wayne Munroe "mess-up" the works with his heavy handedness in the prison matter. . .this one is for Sears!! Please mr. PM. . .dont come around here with: " I een know about no matter where Sears represented that case". . .NOT AGAIN FOR REAL NAH!! tHIS NEW pm "COME ON" LIKE "A GOOD PERSON". . .so please, no more "I een know bout dat"!! After all, that case been in "erry" hut and bush from Grand Bahama in the North to Inagua in the South!!

Much ado about nothing. Makeup? Smh

But she undeniably needs plenty of it.

All this confirms is that Bannister and his allies (Heastie, Rollins, Bethel) used this to create a distraction while wasting tax money. The real question is why did these four feel the need to create such a distraction. Why were key staff retired when they did not endorse purchase decisions. Also note this report highlighted concern for the procurement process post the three Directors departure and key employees departures. I firmly believe the finders fees for the new engines are safely in some offshore accounts. It would be interesting to see also what present Board members have been awarded contracts for services related to BPL. I hope the present Minister continues to dig. However, my fear is he will find treason, sadly.

Treason means to "help the enemy country" against your country during a time of war with said enemy country! Keyword. . .war!! But I see where an "overseas" group did the investigations. . .good for the type of information we will get. . .bad for our leaders!! To get honest and accurate assessments of our leadership we have to go overseas? Keep in mind naw. . .that financial transaction was done by IDB. . .not Bahamians! So who got the fees you are "talking about". . .IDB or who?

That report een "get leaked" yet? Hehehehehehehe. . .knowing how we new government them tries to "make the last one look bad". . ."een nothin there to see". . .or we would have already been given the "juice" on doc them!! Yinna gat me "jonesin" for what lil juicy pieces er things in that report!! But we will never see that report!! Too many "cross-party" folks involved?

I also feel if you betray your country through the intentional mismanagement of a Government owned entity, to the extent it jeopardizes the well being of a country and its citizens to function...then to me that is also a form of treason. Millions spent, and this country still is experiencing power insecurity which not only effects its citizens but the ability to attract investment. What company do you know locally that carries a debt load like BPL and maybe has 120,000 paying customers....

That een treason. . .thats plain ole damn teifin. . .something we only "check" when one Ruffy them do it!! When a politician or their party people them do it. . .nothing happens!! Not only no accountability is recieved. . .they get to keep the money and become rich people them too!!

For like 20 minutes was unsuccessfully calling into Guardian's Comrade Juan to clarify the barriers that separated the coloration browns from the whites back 290 years or sometin' like that including Comrade Juan's advocating brungin' back requiring preachermans' to have to pay the PLP government $400 for a License, — Yes?

I hear you was up in Pop Symonette house

You've lost so much of the credibility you never even got to enjoy by repeatedly confessing you regularly listen to the mindless talking heads on radio. LMAO

Prior to 1964 Pop Symonette was what everybody and their ma, called him.
There was no such thing as a premier, just Pop Symonette,.or Sir Roland having been knighted by the Queen in 1959. Pop's official office was operated out of Symonette Shipyards'   No member of the UBP were paid a salary, neither drove a government car, had a security detail nor had a government paid driver. If you represented one of the out islands and you traveled there - you paid your own travel expenses.   Might be a good time to return some ways to the past with the economic recovery uncertainty of Covid and everything like that. — Yes?

Lady. . .why you een kept ya mouth shut while you were ahead. . .now this report "rippin you a new one"!! I beginning to sound like she and the minister "had the big split" and not the board!!